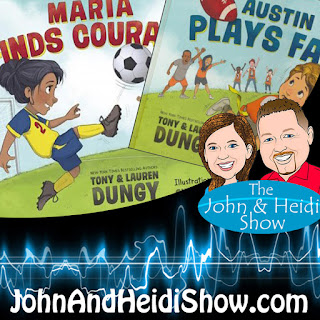 Today we visit with NFL Football Player & Coach Tony Dungy and his wife Lauren about their new Children's Books! - https://amzn.to/2mJnawn

Demi Lovato is said to be alert and with family following a heroin overdose on Tuesday. (https://goo.gl/6foCkq)


Nicholas Lardieri, 31, was arrested in Pennsylvania for drunk driving a Go-kart. Police in Carlisle, PA observed the kart driving erratically and stopped Lardieri, who exhibited signs of being under the influence of alcohol. Lardieri was also found to be in possession of marijuana and was taken into custody at the scene. In addition to DUI, Lardieri is charged with driving under suspended license DUI-related, possession of a small amount of marijuana, and other traffic offenses. (https://goo.gl/g3Z2yq)

SCOOP OF THE DAY:
Brought To You By 80sInTheSand.com (Join John & Heidi for a FUN WEEK!)


A woman was found urinating on the floor of her flight just before take-off from London to Warsaw, Poland. After the flight crew said she couldn’t use the bathroom while the plane was refueling the woman claims she was forced to relieve herself in the galley where the food is usually prepared. The incident took place on board a Wizz Air flight — no joke.

There’s a time to be connected and a time to unplug, but those lines are blurring for many Americans addicted to their smartphones. A study show about 15% of people have used their mobile device during sex

A poll finds that 59% of Americans believe there is intelligent life in outer space.

Governments of the world know just how dangerous a thumb drive can be. The U.S. Department of Homeland Security ran a test in which staffers dropped flash drives in the parking lot of government and contractor buildings. Sixty percent of folks who picked them up simply plugged them into networked computers. That percentage jumped to 90 percent if the drive had an official logo.


If left alone, 70% of birthmarks gradually fade away.

One human hair can support 3 ounces.

1570s, "trifles" (n.); 1630s "busy oneself with trifles; talk nonsense" (v.), apparently a reduplication of obsolete faddle "to trifle," or of fiddle in its contemptuous sense.

Used in a sentence:
“You know Trevor, you needn’t bother yourself with all that fiddle-faddle.”

A St. Paul city council candidate has been arrested after allegedly posting a topless picture of his wife to his campaign website. On Monday, St. Paul police said David Martinez was arrested by officers at around 7:30 a.m. Police say he was arrested without incident for felony non-consensual dissemination of private sexual images. Police added that on Saturday, they received a report that Martinez posted the topless photograph of his wife on the blog section of his campaign website. Below it was a link to the restraining order from her against him. In the restraining order, she alleges that on July 4th Martinez put his hands around her neck and threw her into a shelving unit. Police say the site was taken down on Sunday. Investigators are now working to determine whether there are other images on the Internet and will work to have them removed if they are found. Martinez is now in Ramsey County Jail. (https://goo.gl/Ki1r6W)

MOMENT OF DUH:By LearnWithoutLoans.com (Find Funding For College)
A man who stripped naked before working out at a New Hampshire gym told police officers that he thought he was in a “Judgement Free Zone,” before being arrested. 34-year-old Eric Stagno, was charged with indecent exposure, lewdness, and disorderly conduct on Sunday for taking off his clothes and exercising at a Plaistow Planet Fitness. Police say he walked back and forth and started doing poses on a yoga mat. He allegedly referenced Planet Fitness’ slogan that it is a “Judgement Free Zone.” Stagno is free on bail and is scheduled to be arraigned on September 21st in Plaistow District Court. (https://goo.gl/S3YCHf)