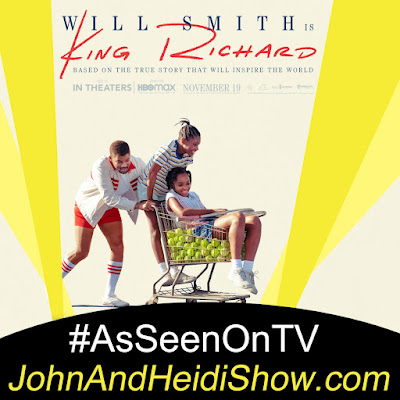 Today we visit with Layla Crawford and Daniele Lawson. They're both in the new Will Smith movie “King Richard”. Based on the true story that will inspire the world, Warner Bros. Pictures' "King Richard" follows the journey of Richard Williams, an undeterred father instrumental in raising two of the most extraordinarily gifted athletes of all time, who will end up changing the sport of tennis forever. Two-time Oscar nominee Will Smith stars as Richard Williams, the father of Venus and Serena Williams. https://www.youtube.com/watch?v=BKP_0z52ZAw

A new study claims that Austin has the highest utility bills of anywhere else in Texas. (https://bit.ly/3CqjoMI)

According to a new survey of 2,000 Americans who celebrate a winter holiday, people expect to gain about eight pounds of weight over the next month. For 4 in 10 people, the extra eight pounds is IN ADDITION to the weight they gained during the pandemic. (https://bit.ly/3HD80RH)

Las Vegas police said a man tried to skip out on a $4,000 restaurant bill then made a bomb threat at the Bellagio. According to the arrest report for Gregg Cohen, officers were called to the Las Vegas Strip property about 3:30 p.m. on November 12th When officers arrived, casino security told them Cohen had been eating and drinking in Spago, a restaurant in the casino, and had a bill of $4,312.75. He reportedly got up and left, saying he was using the restroom. According to the restaurant's manager, Cohen had ordered seafood and a bottle of Dom Perignon, then socialized with women nearby and bought them champagne. The manager then said he saw Cohen at a table game. Cohen was asked to return to the restaurant to pay the bill. The report says Cohen then stated he had $10,000 to pay, but then emptied his pockets and had no money. He was then taken into security custody. While waiting for police to arrive, security said Cohen said, "I bet if there was a bomb, they'd get here really fast." When asked directly if he placed a bomb in the casino, Cohen reportedly said, "There is a bomb," then repeated the word "bomb" multiple times. Court records show Cohen is charged with communicating a bomb threat, theft, and defrauding a proprietor. He's expected back in court on December 1st. (https://bit.ly/3kY7TGq)

Alec Baldwin’s brother Daniel reckons his star sibling bears “no responsibility” for shooting dead his cinematographer — and is being made a scapegoat because of his “staunch” political views. (https://bit.ly/3qHBYxP)

This week Meghan Markle made a surprise appearance on the Ellen DeGeneres show. (https://pge.sx/3cjR97W)

Meghan Markle has revealed she once had a secret Halloween date with Prince Harry. (https://fxn.ws/3kP0OI6)

A 32-million-dollar mansion is being sold in Miami that is currently owned by a dog. (https://bit.ly/3DujLqY)

A Miami Mansion is being sold by the world's richest animal. The house is owned by a German Shepherd named Gunther, who inherited a fortune from a German Countess. (https://bit.ly/3oO5mju)

The father of Disney Star Peyton Clark is accused of grooming and hitting on 14-year-old girls. (https://yhoo.it/3CtVujI)

A new photo shows Jeffrey Epstein and Ghislaine Maxwell being blessed by the Pope. (https://bit.ly/3CATIxa)

A new report claims it's now trendy to get high by licking toad venom. (https://bit.ly/3DMrVLy)

A gang of eighty crowbar wielding thieves ransacked a California Nordstrom store in a terrifying raid that lasted one minute. Two men were caught and they're facing $5,000 bail. (https://www.dailymail.co.uk/news/article-10226929/Gang-80-thieves-ransacks-California-Nordstrom-store-organized-raid-lasted-just-one-minute.html)

Of all the words in the English language, the word ‘set’ has the most definitions.

An anonymous donor is being celebrated for donating a rare venomous spider to an Australian zoo. (https://bit.ly/3kWh7mQ)

A stolen SUV careened through a Durham neighborhood over the weekend before taking out the porch of a home and turning a traffic sign into a spear that impaled itself in a second-floor bedroom. John Bray and his wife, Marissa Minnick, were awakened at about 3:30 a.m. Saturday by the crash, which they said sounded different from those they usually hear in their neighborhood. The SUV, which police told the couple had been stolen a half-hour earlier from a downtown Durham apartment complex, snapped a tree in half, took out part of their fence, demolished some raised garden beds and sideswiped their car. It hit the porch with such velocity that it knocked out a brick support column and left a crack in the home's foundation on the back side of the house. As they surveyed the damage, Bray and Minnick noticed a traffic sign hanging from the second story of their home. It was only when they went back inside that they realized how close the sign came to injuring them as they slept. The sign's metal post crashed through the siding into a bathroom and then through an interior wall into their bedroom, ending up near their bed. (https://bit.ly/31WrhwS)

A California couple was sentenced to prison for illegally obtaining more than $20 million in COVID-19 relief funds — but authorities need to catch them first. Richard Ayvazyan, 43, was sentenced to 17 years behind bars and his wife, 37-year-old Marietta Terabelian, received a six-year sentence in federal prison on Monday for conspiracy, bank fraud and money laundering, according to the Department of Justice. The two are on the run from authorities and were sentenced in absentia. Federal officials said they cut off their tracking bracelets on Aug. 29th. The judge also sentenced Ayvazyan’s brother, Artur, 41, to five years in prison. On June 25, a federal jury found Richard Ayvazyan, Artur Ayvazyan and Terabelian guilty of one count of conspiracy to commit bank fraud and wire fraud, 11 counts of wire fraud, eight counts of bank fraud and one count of conspiracy to commit money laundering. Richard Ayvazyan and his brother were also convicted of aggravated identity theft. The FBI is offering a reward of up to $20,000 for information leading to the arrest of Richard Ayvazyan and Terabelian. (https://bit.ly/3FozwAh)

Try to be a rainbow in someone’s cloud. - Maya Angelou

THIS LIBRARY LETS YOU BORROW PEOPLE INSTEAD OF BOOKS

This improbable meeting came courtesy of the Human Library, a nonprofit learning platform that allows people to borrow people instead of books. But not just any people. Every “human book” from this library represents a group that faces prejudice or stigmas because of their lifestyle, ethnicity, beliefs, or disability. A human book can be an alcoholic, for example, or a Muslim, or a homeless person, or someone who was sexually abused.

The Human Library was created 21 years ago by Ronni Abergel, a Danish human rights activist and journalist who became interested in non-violence activism after a friend he describes as a “troubled youth” survived a stabbing in Copenhagen.

You can sign up to be a Human Library Book at www.humanlibrary.org