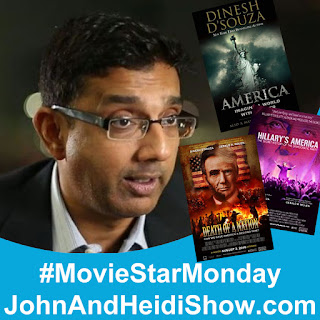 It's a #MovieStarMonday with Dinesh S'Sousa. He has several films out now... each has become a TOP HIT documentary film. His NEWEST film "Death of a Nation" opens in August.
https://www.deathofanationmovie.com

"I am thankful for all of those who said NO to me. Its because of them I'm doing it myself." --Albert Einstein

A study by the Mailman School of Public Health found that the number of marijuana users in America has risen across all adult age groups in America. (https://goo.gl/PxpuwV)


37-year-old Khaled Makhlouf of New Jersey has been arrested for allegedly speeding drunk in a school zone with a passenger on the roof of his BMW. Khaled Makhlouf was taken into custody shortly before 4:00 a.m. in Hoboken after officers saw him allegedly driving too fast down Washington Street -- with someone sitting on the hood of his car. Cops pulled Makhlouf over and say they smelled alcohol coming from the vehicle; the driver also allegedly had slurred speech, droopy eyes, and couldn't complete a field sobriety test. The person riding on the roof was identified as a 27-year-old friend of the driver who was issued a summons for disorderly conduct. Makhlouf was later released to his friend. (https://goo.gl/R4iHHs)
SCOOP OF THE DAY:
Brought To You By 80sInTheSand.com (Join John & Heidi for a FUN WEEK!)

Psychological clinics in the UK are dealing with an influx of people who are addicted to having sex with robots.
(https://goo.gl/mx3jVj)

A Ryan Air flight from Dublin to Croatia plunged 30,000 feet after the cabin lost pressure. (https://goo.gl/hdaHCg)

A new study found that two thirds of adults are distracted by social media during their time off from work.
(https://goo.gl/HRpiMq)

Fresno Police are looking for two masked thieves who stole $27,000 worth of electronics out of an Apple Store.
(https://goo.gl/ZbUZJf)

The FDA is warning that certain dog foods may lead to heart trouble in your pet. HERE IS THE LINK TOO!!

Ten years ago last week (July 18th) the sequel to Batman Begins hit theaters. The Dark Knight is considered by many to be one of the best superhero movies ever made, and Heath Ledger’s take on The Joker was universally praised. Unfortunately, Heath died of cardiac arrest brought on by prescription drug intoxication six months before the film was released.

Half of America’s pet owners (49 percent) have never traveled outside of the country since owning their pet. In a study, one in two owners feel their international travel has been halted, and about a third will alter their travel plans because of their beloved pets and prefer to travel only within the country.


Car airbags kill 1 person for every 22 lives that they save.

About 39,000 gallons of water are used to produce the average car.


Humours (HYOO-murs)
Noun:
-Each of the four chief fluids of the body (blood, phlegm, yellow bile (choler), and black bile (melancholy)) that were thought to determine a person's physical and mental qualities by the relative proportions in which they were present.

Used in a sentence:
“I’ll cure her mad and headstrong humour…”
~Wm. Shakespeare, The Taming of the Shrew

WEIRD NEWS:
Brought To You By 49ByDesign.com (websites $49/mo with no set up fee)
Police in Texas are looking for a man who broke into an office while wearing underwear on his head. The suspect — donning a blue pair of boxer briefs on his head, but not enough to completely hide his face — burglarized Enchanted Rock and Landscape Supplies in Leander, roughly twenty-six miles northwest of Austin. It wasn’t immediately clear if he searched through all the office drawers. The local police department posted surveillance video of the break-in to Facebook, in which the man is seen climbing through a window with what seems to be a flashlight in his mouth, before walking up to the security camera and apparently disabling it. Authorities ask that if anyone recognizes the man, to contact the Leander Police Department at 512-528-2849, rather than identify him on social media. (https://goo.gl/pUaCwS)

MOMENT OF DUH:By LearnWithoutLoans.com (Find Funding For College)
A New Jersey school district has fired a high school teacher who is accused of sending inappropriate photos to a male student. NJ.com reports the Ewing Township school superintendent confirmed Wednesday that the 25-year-old female teacher is no longer employed with the district. The former Ewing High School teacher had been suspended and banned from school grounds since June. Authorities say the teacher sent “inappropriate photos and messages to the student via social media.” She has been charged with endangering the welfare of a child. Officials have not said whether the boy was in any of her classes.(https://goo.gl/pgSUac)