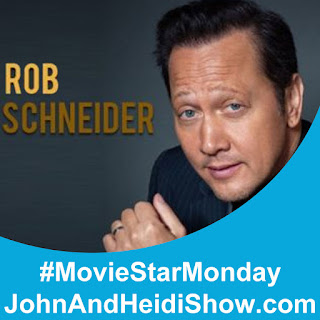 It's a #MovieStarMonday with Rob Schneider. We'll visit about his movies, television programs and stand-up comedy. - https://robschneider.com/

"I don't look to jump over 7-foot bars-I look for 1-foot bars that I can step over." --Warren Buffett

I'm going to give you the name of a REAL place...I want you to tell me if it houses a GOLF COURSE or a REHAB CENTER!
Rolling Oaks in Rocky Point, New York ….. GOLF COURSE


Records show a sailboat crashed into a bridge in Rhode Island, and a man aboard named William Shakespeare didn't realize his wife fell into the water until hours after she was rescued.
According to the police report from the incident, the crash happened in Newport on August 17th after the couple went to watch their son compete in a sailboat race. The state Department of Environmental Management says the Shakespeare’s' boat hit the Newport Bridge around 4:00 p.m. Delyse Shakespeare told authorities she fell off and swam to shore for help. Her husband says he saw she wasn't in the cabin around 1:30 a.m. after he drove the boat to their slip. The couple faces multiple charges including failing to avoid a collision. The Shakespeare’s told authorities alcohol was a factor in the crash. (https://goo.gl/ZMr6vY)
A study by the Pew Research Center found that nearly half of Americans have deleted Facebook from their phone in the past year. (https://goo.gl/R1Dn9e)

A study found that using your cellphone at home for work related matters can damage your marriage.
(https://goo.gl/Srs8Cx)

A New Jersey man was arrested after threatening to blow up Disney World. (https://goo.gl/2AWWXb)

Domino’s in Russia has ended a promotion that gave people free pizza for life if they tattooed a Domino’s logo on their body. (https://goo.gl/KfFWiA)

Almost as many people were killed by guillotine in Nazi Germany as in the French Revolution.

The creature that kills the most people every year isn't snakes, sharks, or even other humans — it's the mosquito.

Used in a sentence:
"Mrs. Kleftorn has the most selcouth finnimbrun collection!"


According to police, a man in Mexico was arrested Friday after stealing a hearse that still had a body inside. The Tlaquepaque Police Department said in a Facebook post the 40-year-old man, whose name was only given as Annibal Saul N., took the vehicle after seeing the keys left inside. The hearse, a Cadillac Escalade, had been readied to take the body of an 80-year-old man from a hospital in neighboring Guadalajara to a funeral home. It’s not yet clear if the man knew the body was inside at the time he took the vehicle. Officers later spotted the hearse on a highway and arrested the suspect, who has since been turned over to prosecutors. Police said on Facebook they were able to recover the vehicle and the body inside.
(https://goo.gl/AjXrKX)

A woman in California allegedly lied about being kidnapped on Saturday because she was unable to pay her employees, and now police are reportedly preparing a warrant for her arrest. 33-year-old Maria Gonzalez reported that she had been kidnapped at gunpoint by two masked men at an intersection in Fresno. The woman allegedly claimed she was ordered by the men to drive. She reportedly claimed she lost consciousness and woke up in a home in Caruthers, roughly twenty miles south, with her hands tied and a rag in her mouth. Gonzalez also reportedly claimed she was missing $9,000 she intended to use to pay the employees of her family trucking business. Investigators, however, determined Gonzalez made up the reported kidnapping because she didn’t have the money to pay two of the employees. Police are reportedly working on a warrant for Gonzalez’s arrest for filing a false police report. (https://goo.gl/EvSyTJ)