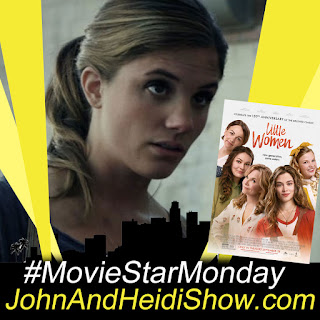 It's a #MovieStarMonday with Clare Niederpruem from the films Vamp U, Dudes & Dragons, and many more. Now she makes her directorial debut with Little Women starring Leah Thompson. It comes out THIS Friday! (Sept 28)

"We must let go of the life we have planned, so as to accept the one that is waiting for us." --Joseph Campbell


A drunken Florida man led Monroe County deputies on a high-speed chase early Sunday, eventually crashing his pickup truck into the entrance sign for Duck Key and jumping into the ocean. Deputies on a Florida Fish and Wildlife Conservation Commission boat pulled the man from the water, but not before he tried to elude authorities by clinging to a piling under a bridge. After his rescue, the man reportedly told deputies that the morning's events would make for “a great story” to tell his friends and family. 31-year-old Nicholas Tralka faces a number of charges, including driving while under the influence, causing property damage, and resisting arrest.
(https://goo.gl/5Qitkq)
Nevada officials are trying to find the owner of a 747 that was left in the desert at Burning Man. (https://goo.gl/wsMtFH)


A survey by the Des Moines Register found that over 10,000 ads about the 2020 Presidential Election have already run on TV in Iowa this year. (https://goo.gl/qiTj2Z)

A Maine restaurant is now getting lobsters stoned in order to kill them in a more humane way. The place is called Charlotte’s Legendary Lobster Pound. (https://goo.gl/KC7JSp)

South Korea and North Korea announced that the two countries would like to partner and host the 2032 Olympics.  (https://goo.gl/EiC2S6)

Lethologica  (LETH-oh-LODG-ik-a)
Noun:
-The inability to remember a word or put your finger on the right word.

From Greek “lēthē” - meaning forgetfulness - and “logos” - meaning word. Lēthē is from Greek mythology. The Lethe, known as the River of Oblivion, was one of the rivers that flowed through Hades. The shades of the dead were forced to drink from it in order to forget their past lives on Earth.

Used in a sentence:
“Lethologica is the reason certain words such as ‘whatchamacallit’ and ’thingymabob’ exist.”