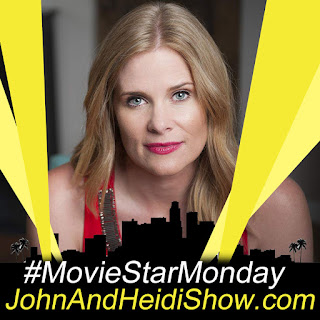 It's a #MovieStarMonday with Audrey Walters from the films Arizona, Our Souls At Night and the upcoming film Big Kill. Also on several TV shows including The Preacher.

"What we achieve inwardly will change outer reality." --Plutarch


Pittsburgh Police say a drunk driver crashed onto the roof of a Greenfield Giant Eagle early Saturday morning. Officers were sent to the grocery store for a report of a vehicle on the roof around 4:00 a.m. Police say the driver was speeding when he struck the curb at a bend in the road. The vehicle apparently went airborne and landed on the roof of the Giant Eagle. Employees were stocking items inside the store at the time of the crash. No one was injured, but police say “due to the nature of the accident and the location of the vehicle, it was highly likely that employees could have been seriously injured or killed.” According to a criminal complaint, the driver, identified as 55-year-old Bobby Lee Jones, was staggering when he got out of the car, his speech was slurred, and officers could smell alcohol on his breath. He failed a standardized field sobriety test and a breath test showed he had a blood alcohol level of .123. He was promptly transported to jail. (https://goo.gl/Bc4Vq2)
In Arizona a man threatened a woman at an automated teller machine and took $20. When she pleaded with him he gave it back and said, "No hard feelings?" The man was arrested at a nearby bar.

A pizza place in New York City (Lions & Tigers & Squares) is making pizza topped with mustard, corned beef, sauerkraut, and cheese. The mustard is used instead of tomato sauce.

No surprise: In a study of frequently-touched surfaces at airports, those plastic bins in the security line are filthy — and contain more infectious agents than airport toilets.

If you’re trying to drop a few pounds and are sick and tired of the same old diets, may we suggest the Taco Cleanse? A group of vegan “taco scientists” in Austin have a book with one-of-a-kind cleansing journey that anybody can follow and stick to. The authors say: “While the typical cleanse works by depriving you of your favorite foods, the plant-based Taco Cleanse rewards your body with what it naturally craves: tortillas, refried beans, guacamole!”

Someone on a bicycle smashed the world record by pedaling a bike to 183.9 mph.

According to a survey by Visa, Americans are spending roughly $48 a week on, well, who knows what. We’re spending about $200 a month on miscellaneous stuff that we just don’t keep track of. That’s $2,400 a year.

Movies have to clarify that they're fiction because of a 1930s lawsuit that traces back to none other than Rasputin.

Used in a sentence:
“The best part of the meal was the stuffed pileus with cream cheese, garlic, and Parmesan.”