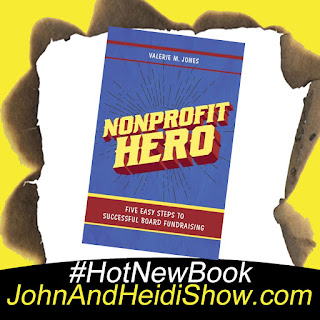 Today we talk to Valerie Jones, She’s raised $175 million (and counting) for charities and she's the author of a new book “NONPROFIT HERO: Five Easy Steps to Successful Board Fundraising”

"Lord, grant that I may always desire more than I can accomplish." --Michelangelo


A stockpile of weapons, including loaded handguns and a semi-automatic rifle, was found in the back of a truck after Florida police found the driver passed out behind the wheel.
32-year-old David Goldammer was arrested after officers found him unconscious in his pickup with the engine running and parked in front of an alley in Miami Beach around 1:00 a.m. ET on Thursday. Police said they could smell alcohol coming from the car and Goldammer almost fell when they told him to get out of the vehicle. Two open beer bottles were found in the truck, as well as two loaded handguns. He also had a gun in the waistband of his pants. Officers ordered Goldammer to perform a field sobriety test, but he refused and was taken into custody. A search of his vehicle turned up two more loaded handguns, a semi-automatic rifle, a pocketknife with a swastika on it, a bullet-resistant vest and a large amount of ammunition. Police have not said why Goldammer, from South Dakota, had the stockpile in his car or what he was doing in the area. Goldammer was charged with DUI, openly carrying a weapon and carrying a concealed firearm. (https://goo.gl/QvXVaw)


Megyn Kelly reportedly reached out to Fox News about a potential return, but the network told her they weren’t interested. (https://goo.gl/PFNjLs)

Justin Timberlake says in his new book that marrying couples should say “I WILL” instead of “I do” because people change over time. http://goo.gl/U6sCzZ


U.S. troops are being accused of drinking the entire beer supply in the city of Reykjavik, Iceland during a NATO retreat this past weekend. (https://goo.gl/g7wuPW)

A study by the American College Health Association found that anxiety and panic attacks are on the rise with college students. (https://goo.gl/Tsvga3)

A study found that people who give up smoking marijuana will quickly improve their memory. (https://goo.gl/XdpMqM)

A video has gone viral of a cat wandering onto a fashion runway in Turkey. (https://goo.gl/BbmsFT)

A British woman who claims to have slept with twenty ghosts is now saying she’s engaged to one. (https://goo.gl/wE63UM)


A worker infected the entire computer network in The U.S. Department of The Interior after he downloaded over 9,000 pornographic films onto his computer. (https://goo.gl/EcGZVQ)

The makers of Brewdog Beer are launching the first ever “Craft Beer Airline” where, QUOTE, “the beer will flow like water.”
(https://goo.gl/MxsH9W)

All mammals take about 12 seconds to poop, regardless of size.

From medieval Latin, from Latin fac ‘do’ (imperative of facere) + totum ‘the whole thing’ (neuter of totus). First known use - mid 16th century. Originally in the phrases dominum factotum (or magister factotum), translating roughly as ‘master of everything’, and Johannes factotem ‘John do-it-all’ or ‘Jack of all trades’.

Used in a sentence:
“Our office factotum always looks like he’s about to snap if anyone asks him to do just one more thing!”


Bay Area Rapid Transit, known as “BART,” has heard its fair share of stories of unusual moments on its trains, but one woman's Tweet Monday prompted BART to respond, “We've never seen anything like this before.” The woman Tweeted video to BART which showed a man holding a chainsaw, before opening another box that contained a second chainsaw. She Tweeted, “I had to film it just in case sh*t got sick! He kept calling himself the Texas chainsaws massacre - then he said he was the BART massacre.” BART reported police had received multiple calls about the incident and officers positioned themselves to board the train at Lake Merritt, when the man got off the train. The man, identified as 47-year-old Patrick Bingman of San Francisco, was taken into custody for having several outstanding arrest warrants and for making threats. He was booked into Alameda County Jail.
(https://goo.gl/b2PZcn)


A South Carolina chef who exposed his genitalia and buttocks at an event showcasing women-owned businesses says he’ll seek counseling. Mike Ray tells The Post & Courier he’s “always been the life of the party,” but says he realized pulling his pants down “didn’t go over so well.” Around forty people had gathered Friday at Ray’s One Broad for the reception featuring designers and high-end artisan goods dealers. Event organizers say Ray put himself between a camera and three women before dropping his pants to his ankles. Ray says he’s apologized to the people involved, but organizer Erin Reitz says he just called her husband. Ray announced Monday he’s giving up day-to-day duties at One Broad and Normandy Farm Bakery. Charleston police are investigating.(https://goo.gl/XFG6JK)

A defense attorney’s pants caught on fire while he was delivering the closing arguments in an arson case.
Newer Post Older Post Home