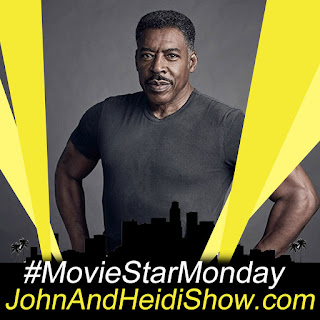 It's a #MovieStarMonday with Ernie Hudson. His new show "Carl Weber's Family Business" started on Tuesday, November 13th at 9pm E on BET. The Duncans are a prominent family who are good by day, but live a secret dangerous life by night. TRAILER - https://zurl.co/heiq

"If something is important enough, even if the odds are against you, you should still do it." --Elon Musk

Brought to you by TimeForRehab.com! Each day we talk about people doing dumb things under the influence, but addiction is no laughing matter… if you or someone you know needs help, you can learn more at TimeForRehab.com.
A woman was arrested Tuesday after allegedly leaving her two small children alone in a hot car that had a bag of methamphetamine on the front seat while she shopped at a Dollar Tree store. Investigators allege that 24-year-old Nicole Buffington left the minors in the vehicle for nearly 30 minutes. Police responding to a 9-1-1 call found the children--a seven-year-old boy and a one-year-old girl--Tuesday afternoon. Cops also discovered a bag containing a crystalline substance “on top of clutter on the driver’s seat.” A field test revealed that the substance contained methamphetamine. Buffington was subsequently contacted inside a nearby Dollar Tree store and arrested on child neglect and narcotics possession charges. She was booked into the Pasco County jail, where she remains locked up on $10,000 bond. Buffington’s rap sheet includes multiple arrests for narcotics possession and possession of drug paraphernalia, as well as collars for theft and failure to appear in court. (https://goo.gl/NNZUJL)

Used in a sentence:
“Gesticulate your prehensile appendages in the aether wantonly with an insouciant rhathymia!”

WEIRD NEWS:Police arrested a visitor to Disney’s Epcot theme park in Florida after the woman allegedly dragged a child by a harness. 34-year-old Sara Villar was arrested Tuesday on charges of child abuse in connection to the incident at the Orlando amusement park. Another park-goer reported the woman to authorities after allegedly seeing her yelling and dragging a child in a harness at an Epcot bathroom. Authorities said Villar caused the crying child to fall and hit their head on the bathroom floor. According to officials, Officers questioned Villar about the incident, but she refused to provide her name and became combative. She then allegedly took off pushing a stroller in “an aggressive manner” that resulted in at least one kid falling to the ground. Authorities added that Villar resisted arrest and banged her head against a patrol car until she left a dent. (https://goo.gl/rpJwmP)

MOMENT OF DUH:This Nevada newsman allegedly needed to work on his coverage. Sports broadcaster Randy Howe — who appears on news station KSNV — was busted Tuesday in North Las Vegas for an alleged incident where he exposed himself. The 50-year-old reporter faces charges for open gross lewdness and indecent exposure. Court records showed he was booked at Las Vegas Detention Center. Police didn’t release further details Tuesday night about the broadcaster’s arrest. Howe has reported for the NBC affiliate since 2008, where he is currently the sports director, according to his LinkedIn profile. He previously worked for news station KOTA in South Dakota.  (https://goo.gl/pZoPZZ)