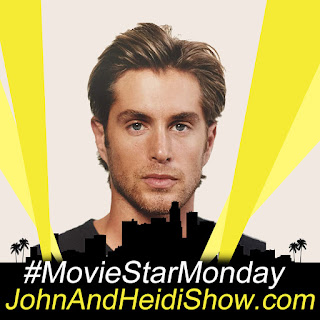 It's a #MovieStarMonday with Greg Sestero from "The Room" and "Best F(r)iends". He's also the author of "The Disaster Artist" which was a book about the movie "The Room" which was made into a movie with James Franco & Seth Rogan.
#MovieStarMonday #JohnAndHeidiShow #TheRoom #GregSestero #BestFriends

"The winners in life think constantly in terms of I can, I will, and I am. Losers, on the other hand, concentrate their waking thoughts on what they should have or would have done, or what they can't do." --Dennis Waitley

Brought to you by TimeForRehab.com! Each day we talk about people doing dumb things under the influence, but addiction is no laughing matter… if you or someone you know needs help, you can learn more at TimeForRehab.com.
A New York man may have netted nearly $73,000 selling counterfeit Apple products before he was arrested by Delaware State Police on Saturday. State police said 33-year-old Alsurymi Abdulrahman was arrested after he was pulled over for erratically switching into the EZ-Pass lane. When officers walked up to Abdulrahman' 2006 Toyota Sienna they could smell marijuana. When they asked for Abdulrahman's driver's license and registration, his passenger opened the glove box, revealing a large amount of U.S. currency. Abdulrahman, who had seemed nervous, quickly shut the glove box to prevent the money's discovery. Police got a warrant and searched the van, where they found large amounts of counterfeit Apple products including 31 lightning USB cables, five sets of earbuds, 110 USB power adapters and 91 iPhone 7 USB lightning cables. Abdulrahman was charged with a felony for trademark counterfeiting, driving without a license, and making an improper lane change. He was arraigned before Justice of the Peace Court 7 and posted $500 secured bond. (https://goo.gl/RTKKTt)


Cows have "best friends" and get stressed when separated.

Used in a sentence:
“I’m sorry, but you know your mother’s cooking makes me feel all wamblecropt.”

The Grandiloquent Word of the Day Calendars are now available for pre-orders! https://gwotd-2019-calendars.backerkit.com/hosted_preorders

Alain Robert, known as the “French Spider-Man,” has been banned from climbing buildings in Britain after his Thursday arrest for illegally scaling one of London's tallest towers without ropes. Robert, a 56-year-old grandfather, appeared in magistrate court in London on Friday, where he pleaded guilty to causing a public nuisance. He received a 20-week suspended sentence, a $7,000 fine, and was barred from climbing all buildings in Britain “until further notice.” Chairman of the Bench Edward McMullan said, “You are demonstrably an accomplished climber but there is always the danger that your actions could be imitated by those less proficient, with potentially fatal consequences.” Robert took an hour to climb the 46-floor, 755-foot tall Heron Tower. He immediately handed waiting police officers his passport, the number for his lawyer, and was then arrested. (https://goo.gl/cicgM2)

MOMENT OF DUH:A man who allegedly has been driving on a suspended license since 1999 has been arrested yet again. On February 1st, Wyandotte, Michigan police pulled over the man after noticing a heavily cracked windshield on the driver’s side of his vehicle. That’s when they learned he was ineligible to drive due to over 380 current suspensions, and he had 45 active warrants for his arrest. Once again, it was not the man’s poor driving that caused him to get pulled over, but an issue with his vehicle. At approximately 2:30 a.m. on Oct. 16th, an officer noticed the vehicle in front of him had a burnt-out license plate lamp. A police report states the officer immediately recognized Gerald Rashad Grant, a 40-year-old Detroit resident, from prior contact. The officer asked him for his driver’s license, registration, and proof of insurance. The officer wrote, “Grant handed me a Michigan identification card and was unable to provide any of the other requested documents. Grant then stated that his driver’s license was suspended. Grant added, ‘I just did six months for the last time you got me.’” According to Deputy Police Chief Archie Hamilton, in his entire police career he had only come across a handful of drivers who had more than 100 suspensions, but prior to Grant had never seen anyone with over 300. (https://goo.gl/vpoG59)