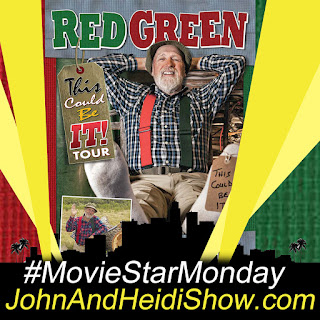 It's another #MovieStarMonday as we talk with Steve Smith.... also known as Red Green! He has hosted the RED GREEN SHOW since the mid 1990's, also done a feature film and several live shows. He has a NEW live show tour kicking off in 2019. http://www.redgreen.com/
#JohnAndHeidiShow #MovieStarMonday #RedGreen #RedGreenShow #SteveSmith #PossumLodge

SURVEYS, STUDIES & SUCH!
A new study found that 40% of Millennials feel more attached to their online community than their real life surroundings. (https://bit.ly/2GPSc2p)

Police say that a trio of Florida teens, including a pair of brothers, robbed a man at gunpoint after setting up a transaction for a $120 vaping device on Snapchat. The victim told police in Cape Coral that he arranged to buy a vape pen on Snapchat via a third party and agreed to meet the seller in front of his home early last Wednesday. The victim hopped into a minivan that pulled up and the driver, who was identified by police as 16-year-old Tristan Held, then pointed a handgun at him before demanding his wallet and phone. A passenger in the back seat, 16-year-old Ernesto Hernandez also pulled out a gun and aimed it at the man, who immediately turned over his cash, wallet, and a cellphone before running back inside his home and calling 9-1-1. The teens were later pulled over by police and the victim positively identified them as the suspects who had just robbed him at gunpoint. Two other handguns and an unspecified amount of cash were also found inside the minivan. (https://nyp.st/2RpURUD)

BIG SCREEN-LITTLE SCREEN:
Ariana Grande tweeted that she’s not going to date anyone ever again.
(https://pge.sx/2BUtwjD)

Los Angeles rolled out its first ever “Earthquake Warning App,” which gives residents up to ten seconds of notice to take cover and hold on.
(https://dailym.ai/2F5z0LH)

A Louisiana man was arrested on New Year’s Day after he declared that January 2nd was “kill cops day.” (https://nyp.st/2C2lRA6)

A Chinese spacecraft made the first ever landing on the dark side of the moon last week. (https://nyp.st/2CNOW3G)

EduBirdie, the #1 proofreading platform, surveyed students on the most outlandish excuses they gave for missing homework this year, and compiled this list of the top 10 most outrageous excuses.
10 My dog peed on my homework

5 I had to get my eyes dilated, so my vision was too blurred to see my homework

4 My cat was in labor with 6 kittens

3 My elderly neighbor was having car troubles, so I had to take her to run her errands

1 When I was doing my homework my computer started smoking and I thought it was going to explode, so I couldn't finish.

FUN FACT FOR YOU:
Share this with your friends... they'll think you're really smart!
In an effort to avoid recapture, convicted bank robber Robert Alan Litchfield underwent plastic surgery so he would look like actor Robert DeNiro after his 1989 escape from Fort Leavenworth, where he was serving a 140-year term.

FEAR THIS.... FUN WITH PHOBIAS!
Noctiphobia… Fear of the night.

WEIRD NEWS: Brought to you by WeirdGiftOfTheDay.com
A Maine man is facing a number of charges after authorities say he broke into a Waterboro home, grabbed a bite to eat, took a shower, then got a car ride from his victim. 35-year-old Derek Tarbox was arrested and is facing charges of class B burglary, two counts of unauthorized use of property, leaving the scene of property damage accident, failure to report an accident, and theft by unauthorized taking. The York County Sheriff's Office said Tarbox was found watching television when a Bennet Hill Road resident arrived home Sunday. Authorities said Tarbox told the homeowner he mistakenly thought the house belonged to a friend and asked for a ride home. The homeowner told authorities that seemed plausible, so he drove him to a house in Hollis, which actually belonged to Tarbox's relatives. When the victim returned, he realized his home had been ransacked and that Tarbox had broken in through a back door. The homeowner called police and deputies and troopers were able to quickly apprehend Tarbox without incident. (https://bit.ly/2SvgAb8)

Police say that a Dallas man spent Christmas Eve attempting to carjack drivers at gunpoint and demanding they take him to get tacos. 26-year-old Roberto A. Canamar Garza was arrested on four counts of aggravated assault with a deadly weapon and one count of aggravated kidnapping. According to an arrest-warrant affidavit, he started his afternoon crime spree by jumping into a vehicle, brandishing a handgun, and demanding the driver take him to get tacos. Fearing for his life, the driver dropped Garza off at a tire shop and drove away. There, Garza followed another man around a car while pointing a gun at him and saying he wanted tacos. A passer-by saw the commotion and tried to hold Garza at gunpoint, but the shooter charged him and the two were still fighting over the gun when police arrived just before 1:30 p.m. Garza remained in the Dallas County jail Wednesday afternoon. (https://bit.ly/2F2MGYG)