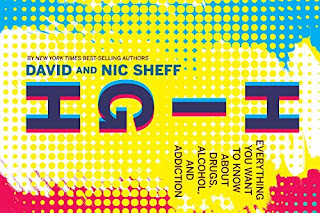 Best-selling authors David Sheff and Nic Sheff. This father-son pair is changing the way America thinks about addiction. Their bestselling memoirs are the basis for the film, Beautiful Boy, starring Steve Carrell and Timothée Chalamet. David is an award-winning journalist who, along with Nic, chronicles the heartbreaking and inspiring experience of survival, relapse, and recovery—and how their family has coped with addiction over many years. Now father and son have teamed up for their first title together... HIGH: Everything You Want to Know About Drugs, Alcohol, and Addiction (AVAILABLE NOW - https://amzn.to/2LZAEjp) The film “Beautiful Boy”..with Steve Carrell and Timothee Chalamet.. is available for streaming on Amazon Prime - https://amzn.to/2RfH43W

A new study reveals the truth about dating in 2018: thanks to social media and the internet, your potential dates can (and will) learn a lot about you before ever meeting face-to-face.
Findings include:
At the end of the day, the majority of people (63%) say they aren't embarrassed by their pre-date investigations.
https://www.jdp.com/blog/2018/12/11/study-online-dating-statistics/

A California man was arrested in Davis County, Utah after he allegedly bit a large chunk of another man's ear off following an argument about conspiracy theories. 43-year-old Bryan David Boyack is charged with one count of mayhem, three counts of domestic violence in the presence of a child, one count of criminal mischief, and one count of intoxication. Investigators said Boyack was in a hot tub with the victim who mentioned that he worked for a big banking business. Boyack took issue with that, and began an “extremely heated” argument about big corporations and conspiracy theories. The victim then locked Boyack out of his home and Boyack began hitting the front of the house with patio furniture. The victim went outside to tell Boyack to stop damaging the home, and that's when he was attacked. Boyack allegedly held the victim to the ground and bit off a large chunk of his ear. Boyack then got into his truck and drove off. The victim detailed his attack to detectives at a hospital. Boyack was taken into custody after turning himself in to police. (https://bit.ly/2CRFLzj)

Dr. Oz is saying that the diet of the year is to eat when the sun is up and stop eating when the sun goes down. (http://goo.gl/F9gfch)

Aquaman’s weekend box office numbers have given the movie a total worldwide haul of $940.7 million. This means Aquaman is now the top worldwide grossing movie in the DC Comics Extended Universe.

Dutch astronaut has described how he accidentally contacted American emergency services on 911 while in orbit above the Earth.
https://www.newsweek.com/

We’re a week into the new year and if you made a resolutions, there’s a 50% chance it’s already been broken. By the end of this month 90% of resolutions will be shot.

An Oakland woman was arrested for biting a jogger who pepper sprayed her dog. (https://nyp.st/2Qs2rcI)

Forty tourists were robbed in Rio De Janeiro Sunday at the Christ the Redeemer Statue. (https://bit.ly/2LQEBa7)

The 116th Congress became the most diverse ever following its swearing in yesterday. The Congress boasts the most female members ever with 102 in the House and 25 in the Senate. The Congressional Black Caucus and the Hispanic Caucus have welcomed all-time-highs in members. There are also more Asian-Americans and Pacific Islanders in Congress than ever before. Democratic congresswomen Ilhan Omar of Minnesota and Rashida Tlaib of Michigan became the first Muslim women in Congress. Kyrsten Sinema of Arizona became the first openly bisexual Senator in U.S. history following her swearing in.

Madonna is being accused of getting butt implants after video leaked of an impromptu performance on New Year’s Eve. (http://goo.gl/Ehyyhz)

Police in Perth, Australia, thought they had a potentially tragic incident on their hands when they were called to a house after a report of a toddler screaming and a man shouting death threats. Multiple police units arrived at a property on Wednesday morning after a neighbor heard a child’s piercing screams and a man repeatedly yelling, “Why don’t you die?” Fearing the worst, officers responded to the incident only to find a man had simply been trying to kill a spider. Wanneroo Police posted the original incident report on Twitter with the caption: “Never a dull moment for police!” Upon arrival, an embarrassed man told the police he was terrified of spiders and had been trying to kill one that had found its way into the house. The police report concluded, “No injuries sighted, except to spider, no further police involvement required.” Wanneroo Police have since deleted the post, as it contained police communications, but confirmed to the Guardian that the bizarre incident had occurred. (https://yhoo.it/2TqAGTX)

In Florida, Sheriff’s deputies say Leida Crisostomo tried to get away on a tricycle. She’s 52, and it didn’t work. Deputies accuse her of using a gun to menace a jogger, and to stop a postal truck to steal from it. She only took one package, and the gun wasn’t real, but she faces multiple charges.