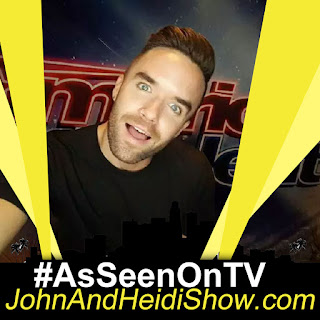 Today we visit with Brian Justin Crumb from America's Got Talent!
He is BACK on TV this Monday... listen for details!
https://www.instagram.com/brianjustincrum

A study by the University of Austin found that people automatically start eating healthier when they begin a daily exercise routine. (https://bit.ly/2GdQMNh)

A man arrested on a felony heroin trafficking charge spent six weeks in jail before investigators determined that the narcotic he was alleged to have possessed was actually laundry detergent. The fallout from last month’s botched bust of 29-year-old Matthew Crull has included the firing of the arresting officer and the dismissal of drug charges against eleven other individuals who were arrested by Steven O’Leary, the former Martin County Sheriff’s Office deputy. Crull was arrested in early December after O’Leary responded to a call about a suspicious vehicle in a KFC parking lot in Port St. Lucie, Florida. Crull was sleeping in his blue Astro van with an open can of beer in the cup holder and a pipe containing a “green leafy substance” in “plain view.” O’Leary reported that a search of the vehicle also turned up a “bag wrapped with a cord which contained a white powder-like substance.” The bag was found in a driver’s side door compartment. A field test of the substance “tested positive for heroin.” After investigators determined that Crull was in possession of laundry detergent, they dropped the trafficking charge, an aggravated felony carrying a mandatory minimum of 25 years in prison. (https://bit.ly/2MDnEQN)

ABC has announced that “Modern Family” will end after its 11th season. The Emmy Award-winning family sitcom is currently in its 10th season. The series centers on a blended family in Southern California and is ABC's longest-running comedy series. Producers promise milestone events in the final, 2019-2020 season.

A former Netflix Boss told The Wrap that the streaming service is lying about its viewership numbers. (https://bit.ly/2UHfsly)

Former Starbucks CEO Howard Schultz told an interviewer that he’s not a billionaire, he’s a “person of means.” (https://nyp.st/2RGqTb9)

A video has gone viral of a Tennessee DUI suspect who who chugged a beer as she was laying on the ground getting handcuffed by the cops. (https://fxn.ws/2CYqLhL)

A Florida woman is facing a domestic battery charge after she beat her boyfriend with a frozen pork chop.(https://bit.ly/2t4SRnd)

An Australian police officer plead guilty to using the police database to study the personal information of women he met on Tinder. He was also fined $2,000 for possessing explicit images of animals.(https://ab.co/2sZKZ6m)

Vampire Bats Drink Half Their Body Weight in Blood
That’s every time they feed. Dracula’s favorite friends slurp up an ounce of blood every meal, which takes about 20 to 30 minutes. Quite impressive for a creature that weighs only two ounces. Their stomach linings absorb the liquid as fast as possible to avoid weighing them down too much when they take flight.

WEIRD NEWS: Brought to you by WeirdGiftOfTheDay.com
According to a criminal complaint, an agitated Pennsylvania man tried to kick in a stranger’s front door to escape from zombies that were chasing him and an array of snakes biting at his ankles. Police allege that Mitchell Pisarcik sought to force his way into a residence in Sandy Township in late-January. Pisarcik told occupants of the home that he was seeking refuge that evening from pursuing zombies and snakes. Cops say that Pisarcik pounded on the home’s entrance with his fists and kicked out the front door’s window. As the 28-year-old began climbing through the broken window, individuals inside the home armed themselves with a claw hammer and a frying pan. But when Pisarcik heard a police siren, he went to the home’s rear door and began trying to kick it in. Unable to gain entrance to the residence, Pisarcik--wearing a t-shirt and jeans in the bitter cold--eventually laid down in the adjacent roadway, where police took him into custody. (https://bit.ly/2HL80US)

Needing a ride to her boyfriend’s house, a Florida Girl ordered pizzas to a neighbor’s house and then popped out of some nearby bushes and stole the car driven by a Papa John’s deliveryman. As detailed in a police report, 14-year-old Josie Bigelow placed the phony food order early Wednesday to lure the victim to a street near her home in Lehigh Acres, a Fort Myers suburb. As the driver walked to the front door of a residence with pizza in hand, Bigelow emerged from some nearby woods and hopped into the 49-year-old deliveryman’s unlocked 2006 Ford Taurus. Bigelow was subsequently arrested about six miles from the heist scene, where investigators say she sought to ditch the hot wheels in a stranger’s driveway. Before getting collared, the girl twice escaped from a pursuing sheriff’s deputy. (https://bit.ly/2DMZBMI)