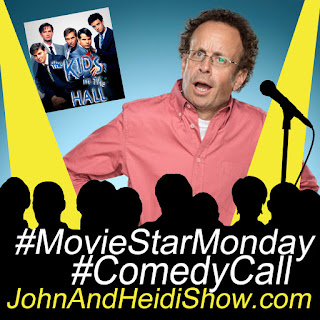 It's a #MovieStarMonday with funnyman Kevin McDonald. He's best-known for the show “Kids In The Hall”, plus several movies and voice acting roles, like “Lilo & Stitch” He now does a ton of stand-up comedy and comedy workshops.

SURVEYS, STUDIES & SUCH! Brought to you by BetterCreditCards.net

A survey by the Treasury Department revealed that our national debt is over $22 trillion dollars for the first time ever. (https://bit.ly/2BvhnSY)

A British man whose drunken antics forced a January 4th WestJet plane from Calgary to London to have to turn around now has to pay $21,260.68 to the airline to account for fuel costs. 44-year-old David Steven Young pleaded guilty to resisting arrest and not adhering to safety instructions. It was revealed in court that Young drank approximately six alcoholic beverages prior to boarding the London-bound WestJet flight. Young repeatedly tried making his way to the bathroom, even when it wasn't safe to move around, “right after take-off.” He then became aggressive with both flight attendants and another passenger. Because flight attendants and the passenger “were left shaken and threatened by the accused's behavior," the flight crew chose to divert the flight. Per a court document, to land safely, the captain needed to dump about “20,000 pounds of fuel.” WestJet's losses in both fuel and passenger payments could reach more than $200,000. (https://bit.ly/2SsI0BF)

Stevie Wonder and John Legend headlined the Motown Tribute 60th anniversary concert, which will air in April. (http://goo.gl/qC69XW)
Michael Jackson has been edited out of “Motown’s 60th Anniversary Special” over concerns that he fondled kids. (https://bit.ly/2X0ILl2)
Bill Cosby’s Lawyer says the disgraced comic is having an “amazing” time in prison and he even gave up coffee. (http://goo.gl/htREoc)


A man released a giant white rat inside a New Jersey McDonald’s, causing frightened customers to run for the exits. (https://bit.ly/2WZsyfE)

California Governor Gavin Newsom announced that the state is abandoning its Bullet Train Project because it takes too long and costs too much. The Bullet Train would cost $77 billion dollars to complete. (https://bit.ly/2E8qGtO)
Justin Bieber has reportedly entered treatment for depression and anxiety.
(https://yhoo.it/2RWfLXP)


A New Jersey woman gave police the finger in her mugshot after she was busted for stealing cars. Witnesses say she resisted arrested but when police tried to mace her it didn’t work. (https://nydn.us/2StWIcx)

Convicted Mexican Drug Kingpin El Chapo will serve his time in a Colorado prison that’s known as “the Alcatraz of the rockies.” (https://bit.ly/2X9NYXM)

A video has gone viral of a Florida woman shaving her legs on the back of a motorcycle. (https://nyp.st/2X1voRt)

A video of a large white horse that wandered into the home of a Minnesota school teacher has gone viral. They don’t know who the horse belongs to and they don’t know his name. (https://on-ajc.com/2BxfPaT)


FUN FACT FOR YOU:
Share this with your friends... they'll think you're really smart!
Craving Ice Is a Symptom of Iron Deficiency
If you like crunching ice after you finish your soda, you might be suffering from anemia. Also known as “pagophagia,” the compulsive eating of ice may not just be a nervous tick, but a way of cooling inflammation in the mouth caused by a lack of iron. So if you like chomping down on those cubes, get thee to a doctor, stat.

WEIRD NEWS: Brought to you by WeirdGiftOfTheDay.com
An A&W Restaurant in Canada was completely destroyed after a fire ripped through it Sunday night. Customers, however, weren’t deterred — with some continuing to wait in the drive-thru for their fast-food fix. The Global News reported that cars could be seen queuing up at the chain as the blaze raged on. The fire began just after 5:00 p.m. and officials were working to contain it until 2:30 a.m. Monday, the Winnipeg Fire Paramedic Service told the Daily News. Firefighters were unable to enter the restaurant because it was considered too dangerous due to high heat and heavy smoke. No civilians were injured, but a firefighter suffered minor injuries, the department said. He was not taken to the hospital. The cause of the fire was not immediately known. (https://nydn.us/2WZ46v5)

Test driving a car is perfectly legal. Not returning that car to the dealership is a crime. Now the Winter Haven Police Department in Florida is asking for help finding the man accused of doing just that on Feb. 2nd. Officers identified the suspected car thief as 29-year-old J’Briel Scurry. They said he and another man went to a dealership inquiring about buying a car. Scurry found a vehicle to test drive and even ended up filling out paperwork to purchase it. A sales associate became busy with another customer, so Scurry and the other man went back outside on the lot. That’s when they saw a white 2015 Buick Verano. Police said they got the key from the employee after saying they only wanted to look at it. The dealership later noticed the Buick was gone. They used the cell phone number listed on Scurry’s paperwork to contact him. Investigators said he told them he was just test driving it and he would return it to the lot before the dealership closed for the day. He didn’t. Nine days later, a warrant was issued for his arrest for grand theft auto. (https://bit.ly/2N5lnye)