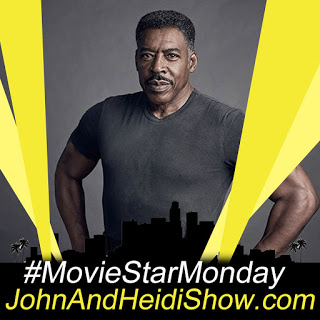 It's a #MovieStarMonday with Ernie Hudson. The first season of his new show "Carl Weber's Family Business" wrapped up last week on BET. The Duncans are a prominent family who are good by day, but live a secret dangerous life by night. TRAILER - https://zurl.co/heiq

A study by Exeter University found that people who wake up early in the morning have much stronger mental health. (https://bit.ly/2MEfCau)

Police in Maine say a drunken man took the wrong Lyft and tried to get into a house he mistakenly thought was his home. Cape Elizabeth police say the Falmouth man mistakenly got into a Lyft summoned by a man who lived next door. Police say the man was dropped off early Saturday and staggered toward a nearby home, believing it to be his. Police added that he caused a commotion trying to get in, leading the homeowner to call the police. Cape Elizabeth Police Chief Paul Fenton says the intoxicated man was taken back to the police station to sober up. Fenton says the homeowner didn’t want to press charges and that the drunk man is “very sorry.” (https://bit.ly/2BabuKX)

BIG SCREEN-LITTLE SCREEN: Brought to you by ChannelSurferTV.com
Jersey Shore is getting a bachelor style spinoff in which 20 women compete for the affection of DJ Paulie D and Vinny. It’s called “Double Shot Of Love”
(https://bit.ly/2CULV0t)

Cory Feldman is said to be shopping around a documentary about child sex abuse in Hollywood. (https://pge.sx/2RlI9lS)


SCOOP OF THE DAY: Brought to you by FunkyMonkeyShirts.com

The actor who played the lead role of Roger in “Rent Live” broke his foot during a final rehearsal so they had to pre-record some of his scenes.
(http://goo.gl/CJfMh8)


Pennsylvania prison officials say someone has been flying a drone over the recreation yard to film Bill Cosby while he’s outside. (https://bit.ly/2RnLq4f)

Liam Hemsworth said that he is a very lucky man to be married to Miley Cyrus.
(http://goo.gl/FPA32u)


Harvey Weinstein was rumored to be at The Sundance Film Festival but he has not been seen publicly. (http://goo.gl/YzscmP)

A video has gone viral of a North Dakota driver spinning out after hitting a patch of ice on the highway. Luckily no one was hurt and that man told police he was on his way to dinner at the fanciest restaurant in all of North Dakota.
(https://bit.ly/2Bb8fm9)

New Jersey police arrested six people at a youth basketball game after two mom’s got into a fight. (https://fxn.ws/2UnpKH8)

Denmark is building a wall along its southern border with Germany to keep out wild hogs that are infected with swine flu. (https://bit.ly/2Unpmsa)
FUN FACT FOR YOU:
Share this with your friends... they'll think you're really smart!
Cows don’t like Willie Nelson. A dairy cow will produce up to 3% more milk when listening to music. But they don’t like country music, especially Willie Nelson. They need something with a good beat.

Xanthophobia… Fear of the color yellow.

According to police who arrested the suspect on a domestic battery charge, a Florida Man yesterday smashed his wife in the face with a Taco Bell burrito, “causing some to go up into her nose.” Investigators say that 49-year-old Victor Fosser got into a confrontation Sunday with his wife inside the couple’s home in Parrish. According to a police report, the 49-year-old victim was upset about a family matter and “attempted to seek comfort from her husband.” Instead, Fosser “went to Taco Bell and picked up lunch.” Cops say that upon returning to the residence with his takeout order Fosser attempted to give his wife a burrito, holding it in front of her face while making fun of her for being upset. The woman then grabbed the burrito and threw it on the floor. A sheriff’s deputy reported that Fosser then “picks up the rest of the burritos and smashed them in her face causing some to go up into her nose.” He is currently being held in the county jail on the misdemeanor battery count. (https://bit.ly/2B9PyiM)
MOMENT OF DUH: Brought to you by FunkyMonkeyShirts.com

Portland police are looking for a thief who stole an expensive diamond ring from a local pawn shop and then tried to sell it back 24 hours later. Surveillance cameras at the “All That Glitters” show the suspect come into the store just at closing time Sunday night. People who work at the pawn shop told FOX 12 they’ve seen the man in the store before and that he appeared to know what he was looking for. The suspect is then caught on camera grabbing a ring worth $12,000 from an employee’s hand. The suspect got away, but just 24 hours later he showed up at the “All That Glitters.” This time, the suspect came with a friend to pawn the ring. The general manager asked the suspect where he got the diamond and the suspect told him he bought it in Las Vegas. But the general manager told the man that the ring looked like the one stolen from their Lombard store. After an argument, the suspect tried to grab the ring back but the general manager was able to hold onto it. (https://bit.ly/2TmrKQ3)