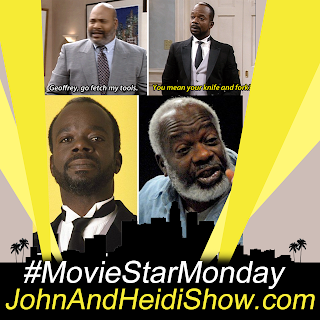 It's a #MovieStarMonday with Joseph Marcell, British actor and comedian best known for his role as Geoffrey Butler, the butler on the NBC sitcom The Fresh Prince of Bel-Air. He was recently in a new movie The Boy Who Harnessed The Wind…streaming NOW on Netflix.Inspired by a science book, 13-year-old William Kamkwamba builds a wind turbine to save his Malawian village from famine. Based on a true story. A 13-year-old boy is thrown out of the school he loves when his family can no longer afford the fees. He sneaks into the library and learns how to build a windmill to save his village from a famine.

A study by Apple Inc. found that the Apple Watch was able to detect an irregular heartbeat in a screening of over 400,000 people. (https://tmsnrt.rs/2FiC4E0)

A man from Austin, Arkansas, was issued his seventh DWI Sunday, March 4th. On Sunday morning, deputies found a man later identified as 34-year-old Angus Lee Murray from Austin, asleep in his truck at a North Little Rock gas station. Authorities woke him up, but Murray sped off. Sheriff's deputies ended up in a car chase with Murray throughout North Little Rock neighborhoods until he ended up crashing into a tree. According to the report, Murray then tried to run away but fell into a hole and that's when deputies arrested him. He's accused of violating the Omnibus DWI Act, which is a DWI for the fourth time and he has seven, two counts of fleeing, two counts of aggravated assault, driving with a suspended, or revoked, license, careless driving, and refusal to submit to chemical test. Murray pleaded not guilty in district court. He's still in the Pulaski County jail with his bond set at $100,000. His next court date is May 6th. (https://bit.ly/2UldgjS)

The Playboy Mansion is said to be haunted by female ghosts two years after Hugh Hefner died. (https://dailym.ai/2UOpSQQ)

A music video producer who worked closely with Michael Jackson says he believes the accusers in “Leaving Neverland.” (https://pge.sx/2CsQRds)

SCOOP OF THE DAY: Brought to you by BetterCreditCards.net
A cow got loose and ran onto the Major Deegan Expressway in New York City.
(https://bit.ly/2JtSVaQ)

A man on trial for a fatal stabbing says he did it because he thought his victim was a werewolf. (https://bit.ly/2WavwwC)

Little Caesar’s brought back its bacon wrapped deep dish pizza to coincide with the NCAA Tournament. It’s got three feet of bacon around it. Pizza Hut is also bringing back its P’zone! (https://bit.ly/2ugYlvz)

A new study found that high potency marijuana is strongly linked to psychotic disorders like schizophrenia and paranoia. (https://bit.ly/2Jr3pYQ)

A video has gone viral of a criminal who stole alcohol from a Florida supermarket while dressed as Spiderman.(https://bit.ly/2HKm9zL)

A California man who was forced to shorten his fence after a neighbor complained is getting revenge by setting up a parade of naked mannequins in full view of his neighbor’s house. The day after the court case he set up 100 naked mannequins. (https://nyp.st/2JoTX88)

FUN FACT FOR YOU:
Share this with your friends... they'll think you're really smart!
Toilet Seats Are Cleaner Than Your Cell Phone. Okay, you still want to wash your hands after you visit the washroom, but you might want to disinfect your cell phone while you’re at it, too. In a study by the University of Arizona, cell phones were found to have 10 times more germs than a toilet seat that was tested in the experiment. Yeah… this may be a good time to learn The Single Healthiest Way to Wash Your Hands.


WEIRD NEWS: Brought to you by WeirdGiftOfTheDay.com
In the UK, a bride asked for a £100 refund for wedding flowers that supposedly never arrived - only to be allegedly caught with the bouquet in social media photos. The recently married woman complained to the mother and daughter-in-law-owned wedding decor company “Forever to Hold” for five months that the flowers never arrived. She was eventually refunded £100 - despite the company having proof of postage. Immediately after receiving the refund, co-owner Sarah Weatherill claims the woman blocked her and business partner Lisa Husband on Facebook. However, a year later, Sarah was left in disbelief when she noticed the woman had posted wedding pictures online with her clutching what appeared to be the exact flower bouquet in the snaps. After confronting her, Sarah was finally able to get the money back. Sarah refused the woman’s offer to repay the balance by £20 per week and eventually she paid the £100 back in full - after being told the incident would be reported to the police.
(https://bit.ly/2U2SXKQ)

A 13-year-old driver led deputies on a wild police chase in northern Idaho that reached speeds of 100 miles per hour. The Kootenai County Sheriff's Office says deputies tried to pull over an SUV that failed to stop at a stop sign on Highway 54 near Athol early Monday morning. Police say the driver, who had several other teens in the car with him, accelerated to 80 mph once the overhead police lights were turned on. The vehicle then headed south on Clagstone Road and reached speeds of 100 mph. Police say the driver eventually pulled over after a parent of one of the teens called and told them to pull over. The driver was arrested and booked into the Kootenai County Juvenile Detention Facility and was charged with felony eluding and reckless driving. (https://bit.ly/2UMow99)
THESE THREE THINGS!
(Use promo code RADIO to save $25 per ticket)
Newer Post Older Post Home