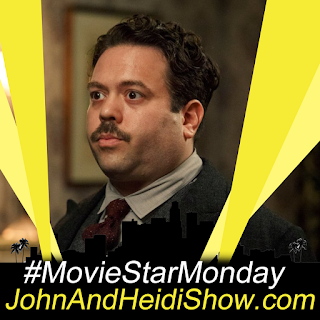 It's a #MovieStarMonday with Dan Fogler from The Goldbergs and The Walking Dead. We will talk about the NEW SEASON of The Walking Dead that just started on AMC, plus some of his movies like Balls of Fury, Good Luck Chuck & Fanboys. https://www.imdb.com/name/nm0283945/

A Gallup Poll named Hawaii as the nation’s happiest state.
(https://on.today.com/2Xqp0U1)
BRAIN ON DRUGS:
Brought to you by TimeForRehab.com! Each day we talk about people doing dumb things under the influence, but addiction is no laughing matter… if you or someone you know needs help, we're here to help! You can learn more at TimeForRehab.com.

A South Carolina man who bought more than 120 boxes of Girl Scouts cookies to help the scouts escape the cold has been arrested on drug charges. News outlets report the U.S. Drug Enforcement Agency says 46-year-old Detric Lee McGowan was arrested Tuesday on charges including conspiracy to distribute fentanyl and cocaine. The agency says McGowan is the same man who appeared in a photo that garnered thousands of views and shares online. Mother Kayla Dillard had shared the photo on Facebook, saying the man paid $540 in cash for all the girls’ cookies so they could escape the cold outside a store near Greenville, South Carolina. She said she didn’t get the man’s name. An indictment issued last week says McGowan, also known as “Fat,” is one of several suspects in an ongoing drug investigation. It says he and 10 other people conspired to import drugs from Mexico in late 2018. The U.S. Attorney’s Office says authorities are still searching for one of the suspects. (https://nyp.st/2NwJTZl)
BIG SCREEN-LITTLE SCREEN: Brought to you by ChannelSurferTV.com
Kim Kardashian praised “Long Island Medium” Theresa Caputo after getting an “incredibly accurate” reading from the psychic.(https://pge.sx/2H4vOkp)

Oprah Winfrey has lost $39.2 million dollars of her net worth after her stock in Weight Watchers plummeted. Analysts say she lost the money because she didn’t sell her stocks on time. (https://bit.ly/2EzfJS4)SCOOP OF THE DAY: Brought to you by BetterCreditCards.net
A video has gone viral of an Amish man skiing off the back of a horse and buggy in Minnesota. (https://bit.ly/2T290t1)

Prince Harry made headlines in Monaco by jokingly asking Meghan Markle if she was pregnant with his baby. (http://aol.it/2IFsD5d)

Michael Jackson’s Neverland Ranch has been put on the market for $31 million dollars, which is 70% less than it sold for last time.(https://mansion.global/2EiJd5o)

An Ohio man allegedly punched his lawyer in the face in court Tuesday upon finding out he was sentenced to almost five decades in prison. The altercation, caught on video by a Cuyahoga County sheriff's deputy's body camera, shows 42-year-old David Chislton assaulting his defense attorney after finding out he was sentenced to 47 years. Chislton had pleaded guilty to domestic abuse, aggravated arson, felonious assault, and cruelty against a companion animal. He now faces more charges after Tuesday's assault. Aaron Brockler, Chislton's attorney, was standing next to his handcuffed client during the sentencing hearing in Common Pleas Court Judge Nancy Margaret Russo's courtroom when, he said, everything went black. (https://nbcnews.to/2SkfEWa)

FUN FACT FOR YOU:
Share this with your friends... they'll think you're really smart!
The Exorcist film set was haunted. Based on the book by William Peter Blatty, The Exorcist, released in 1973, stirred up quite a bit of controversy in the years surrounding its release. For starters, the set used as the home of Regan MacNeil burned to the ground when a bird flew into a circuit box. Not so surprisingly, the only room left standing was the one used for the exorcism. Not only did actors suffer multiple injuries during the filming of the movie, two of them actually died shortly after filming wrapped—actors that played characters who died during the film. To make matters worse, when the film premiered in Rome, lightning struck a 400-year-old cross atop a nearby church.

Ombrophobia… Fear of rain or of being rained on

WEIRD NEWS: Brought to you by WeirdGiftOfTheDay.com
The vice mayor of Fort Meade was arrested Tuesday on a charge of aggravated stalking after she was accused of making harassing calls to a friend whom she suspected of having an affair with her husband. According to the Polk County Sheriff's Office, 59-year-old Maurice Nelson Campbell was arrested following an investigation into the apparent harassing phone calls. The Sheriff's Office said a female victim had previously made complaints to authorities about repeated harassment, but declined to pursue charges because Campbell would stop harassing her. According to a release from the Sheriff's Office, that changed after a series of phone calls in early February. Campbell called the woman more than six times from various numbers between the afternoon of Feb. 8th and the early morning hours of Feb. 9th. The woman turned her phone off but woke up to multiple missed calls and profanity-laden text messages. The woman, fearing the threats were credible, decided to pursue charges. She said she believes Campbell was using her position on the Fort Meade City Commission to intimidate her. (https://bit.ly/2GM2vE1)
MOMENT OF DUH: Brought to you by FunkyMonkeyShirts.com

42-year-old Brent Hansen has received 34 months in prison and three-years supervised release in U.S. District Court. Hansen, a resident of Indio, California, pled guilty to a charge of illegal possession of a firearm as a convicted felon. Assistant U.S. Attorney Jack Schmidt said Hansen tried to clear airport security at Juneau International Airport on October 16, 2017, with a backpack that contained a loaded Glock 19, 9mm pistol. TSA Agents recognized a suspicious object as Hansen placed his bag through the X-ray machine. Hansen told law enforcement that he had forgotten he had packed the firearm. Juneau Police learned the firearm have been reported stolen. Hansen had several prior convictions in California for burglary, drug charges, attempted grand theft, and possession of a firearm by a convicted felon. (https://bit.ly/2BVkG6h)
THESE THREE THINGS!
Proud Dad Mic’d His 4-Year-Old Playing Hockey and the Results Are Comedy Goal

https://www.goodnewsnetwork.org/dad-micd-his-4-year-old-playing-hockey/Awesome story! Please feel free to share YOUR good News too!
Also, consider joining John & Heidi at 80s In The Desert on
May 3rd & 4th in Las Vegas – www.RadioTravelGroup.com
(Use promo code RADIO to save $25 per ticket)
Newer Post Older Post Home