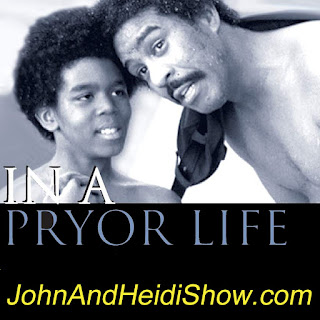 Today we visit with Richard Pryor Jr. about his new book “In a Pryor Life” his self proclaimed "Freakish Life" paralleled his famous father's and namesake in many ways. A Peoria whorehouse, abuse, alcohol and drug addition, as well as frequent bad decisions. However, he survived. And that's what his book is about, a real-life story of overwhelming obstacles, surviving, and thriving. AVAILABLE NOW - https://amzn.to/2UsKYb5

A study published in The Lancet found that 1 in 5 people is eating their way to an early death because of their unhealthy habits. (https://bit.ly/2YQaFAU)

Police say that a man admitted to taking a Wayne State University bus on a joyride through the Ann Arbor area early Friday morning. Wayne State University Police Chief Anthony Holt said a shuttle bus driver called police about 6:15 a.m. March 29th, after the bus was taken from a gas station. Holt added that it was stolen after the driver left the bus running and went inside the gas station. The bus belongs to Trinity Transportation, a company contracted to run the shuttle service. Lt. Darren Green of the Michigan State Police First District said that about an hour later, around 7:15 a.m., police spotted the bus on I-94 near Ann Arbor. They stopped the bus on westbound I-94 near Baker Road, west of Ann Arbor, and conducted field sobriety tests on the driver - a 59-year-old Detroit man. It’s believed the man was drunk. Green said, “He uttered, without being asked, 'The keys were in it, so I took it.’” The man was arrested for possession of the stolen vehicle and suspected operating while under the influence, said Green. He was then taken to a hospital for a blood draw. The man already had 16 misdemeanor warrants, along with 21 driving suspensions. (https://bit.ly/2FJnggI)

The Queen of England has banned Meghan Markle from wearing the crown jewels that were made famous by Princess Diana. (https://pge.sx/2Ii8T61)
“Shazam!” took in $53.4 million to debut atop the weekend box office. Another newcomer, “Pet Sematary,” finished in a distant second place with $25 million. Last week's champ, “Dumbo,” dropped to third place with $18.2 million. “Us” slipped to fourth place with $13.8 million. “Captain Marvel” made $12.6 million to finish fifth.
SCOOP OF THE DAY: Brought to you by BetterCreditCards.net
The Labor Department revealed that the U.S. added 196,000 jobs during March. (https://nyp.st/2OVviaq)

Pabst Blue Ribbon is releasing two new beers for spring. The first one is non-alcoholic. PBR extra is the other beer and it’s nearly twice as strong as original PBR. (https://bit.ly/2Vx47oQ)

The makers of Lunchables are making a morning version of the snack called “Brunchables.” Each package has a “build your own sandwich” feature that teaches kids the art of self reliance. (https://bit.ly/2G6t3ON)


A Charlotte, North Carolina couple is celebrating 82-years of marriage this week, which is one of the longest unions on record. The husband is 103 and the wife is 100. (https://on.wsoctv.com/2TTIpK7)

ABBA announced that the band is releasing its first new song in 37 years this September. (https://bit.ly/2JZFgsj)

The wife of jailed drug kingpin EL CHAPO is starting a fashion line inspired by her husband. (https://nyp.st/2OXuim7)

A video has gone viral of a goat trying to board a school bus in Utah.
(https://on-ajc.com/2I3Kj9p)

FUN FACT FOR YOU:
Share this with your friends... they'll think you're really smart!
Shakespeare’s tombstone in Stratford’s Holy Trinity Church bears this inscription, said to have been written by him: Good friend, for Jesus’ sake forbear to dig the dust enclosed here. Blest be the man that spares these stones, and curst be he that moves my bones”.


WEIRD NEWS: Brought to you by WeirdGiftOfTheDay.com
The Bloods and the Crips marched peacefully together for the first time in twenty-seven years to honor the death of rapper Nipsey Hussle. Nipsey was known as a guy who invested heavily in his community and had no ill will with either gang, so the gangs were happy to be involved. (https://bit.ly/2YXPMDQ)

An Oregon man is accused of faking a burglary to cover up money stolen from his daughter’s sale of Girl Scout cookies. 40-year-old Brian Couture of Forest Grove pleaded not guilty to charges of initiating a false report and improper use of an emergency reporting system. Police said Couture called 9-1-1 on March 6th and reported that someone had gotten into his home through a sliding glass door leading to a struggle. Couture was unresponsive when police arrived and he was taken to a hospital. The area was searched, but no suspect was located. Police said Couture later admitted that he had staged the incident. Detectives determined he did it to conceal the theft of money from a nonprofit organization. A Girl Scouts spokeswoman confirmed Couture is the father of a Girl Scout and there is around $740 in unaccounted for cookie sales in connection with this case. (https://bit.ly/2K4jYKm)
THESE THREE THINGS!

What do these 3 things have in common:
A GOLFER—A CAVEMAN—MICKEY MOUSE
(They have CLUBS)