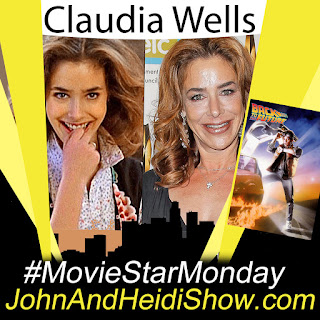 It's a #MovieStarMonday with Claudia Wells. She is one co the nicest people ever! She portrayed Jennifer Parker in Back To The Future. When the sequels were being filmed, she was caring for her ill mother and was not able to reprise the role. She has since opened a mens clothing store in Studio City California. Wells Armani. Here is her website with links to her social media - https://www.claudiawells.com/

A Bank of America survey found that the human life expectancy could soon surpass 100 years thanks to medical breakthroughs. (https://cnb.cx/2H8Fev0)
BRAIN ON DRUGS:
Brought to you by TimeForRehab.com! Each day we talk about people doing dumb things under the influence, but addiction is no laughing matter… if you or someone you know needs help, we're here to help! You can learn more at TimeForRehab.com.

Cops swarmed a San Diego building Tuesday when a man waved what appeared to be an assault rifle out of its window — only to discover it was a bong shaped like an AR-15. Officers on patrol in the area of the residential Palms Hotel were put on high alert at 6:22 p.m. local time when a concerned witness “said they saw a guy pointing what appeared to be a rifle towards the officers” from a window. Authorities immediately formed a team, set up a perimeter around the area, and stopped trolley traffic as they went up to the room to question and detain 22-year-old Justin Baxley and another woman who was inside. But once inside the room, cops found the gold, gun-shaped glass bong inside a small refrigerator. The pot-smoking device “had a realistic hand grip similar to an AR-15 rifle.” Cops said that Baxley was charged with exhibiting a replica firearm in a threatening manner. (https://nyp.st/2Vrykty)
BIG SCREEN-LITTLE SCREEN: Brought to you by ChannelSurferTV.com

Fox announced that “Empire” will end after its upcoming sixth season.
(https://bit.ly/2YtPl3j)

SCOOP OF THE DAY: Brought to you by BetterCreditCards.net
Switzerland has opened its first “bedroom cinema” movie theater in an effort to compete with NETFLIX. It’s just like a movie theater, but the viewers lay on beds to recreate the feeling of watching Netflix at home. (https://bit.ly/2LEUTGM)

Apple’s stock has fallen by 6% over fears that the Trade War between the U.S. and China will force them to raise prices. (https://cnb.cx/2HhhjcG)

Twitter announced that the company “accidentally” shared its user’s personal data with an advertising partner. (https://nyp.st/2W0Cb05)

A survey by Clean Slate Laser found that face tattoo removal is the fastest rising form of cosmetic surgery. (https://nyp.st/2WH2961)

A study by Concordia University found that anger is more harmful to your health than sadness. (https://bit.ly/2Q6SdjM)

A California Elementary School Gym Teacher was arrested for DUI after being pulled over on his way home from school. (https://bit.ly/2VFv8dZ)

Vladimir Putin fell on his face after taking a victory lap at an ice hockey match in Russia. Putin scored eight goals during the game! (https://nyp.st/2Vx9BE9)

A video has gone viral of Vladimir Putin falling on his face after a hockey game in Sochi, Russia. Thousands of people laughed when he fell.
(https://nyp.st/2Vx9BE9)

FUN FACT FOR YOU:
Share this with your friends... they'll think you're really smart!
Botox Affects Your Emotions. You know that Botox can reduce wrinkles by paralyzing parts of your face, but the changes aren’t just cosmetic: It has also been found to make it harder for those using it to identify emotions as deeply as those who don’t. One recent study found that Botoxed women were less able to identify the emotions felt by those in photographs than the people who did not use Botox.

Opthalmophobia... Fear of being stared at.

WEIRD NEWS: Brought to you by WeirdGiftOfTheDay.com
An Ohio man was arrested after allegedly stealing a steak by placing it in his pants and walking out of a supermarket. Teyvaun Nelson-Allen of Solon was arrested earlier this month after attempting to leave the Market District Supermarket with a package of steak shoved in his pants and carrying a package of beef jerky — which was also not paid for. The 23-year-old reportedly refused to comply with an officer’s request to stop. While the officer was arresting Nelson-Allen in the parking lot of a nearby apartment complex, the steak package allegedly fell from the man’s pants. According to FOX19, Nelson-Allen was accused of shoplifting from the supermarket the day prior to the meat incident. He was arrested and charged with theft. (https://nyp.st/2JDCsj1)

OOPS.... they spelled "School" wrong on a crosswalk!
https://www.wvlt.tv/content/news/School-misspelled-at-Florida-crosswalk-508802201.html THESE THREE THINGS!

What do these 3 things have in common:
CUP—SHORT—BIRTHDAY
(They are all types of Cakes)
Newer Post Older Post Home