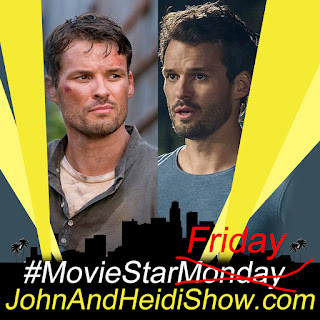 Today is a #MovieStarFRIDAY! We visit with Austin Nichols. His role in Six Feet Under led to films like The Day After Tomorrow, Wimbledon, and Glory Road. Then after playing Morgan Earp on Deadwood, David Milch asked Austin to play the title role in his new series, John From Cincinnati. Nichols has been on a string of hit cable shows. Ray Donovan, Bates Motel and The Walking Dead. He has a new movie out called The Iron Orchard - https://amzn.to/2Mx6esD

An Israeli study found that children who are raised with dogs have lower blood pressure. (https://cutt.ly/2iqXMn)

Cops say that a Florida Woman denied ownership of a bag of MDMA (Ecstasy/Molly) that dropped from her shorts right after a “feminine product” fell from the same space. Officers responding to a call Saturday afternoon about a disturbance at a Vero Beach residence encountered 34-year-old Kristen Szatmary seated in a taxi outside the home. While speaking with Kristen--who said she had just been in a “verbal disturbance” with her mother--a sheriff’s deputy “observed white powder on her right nostril.” The cop then asked Kristen to exit the vehicle. As Kristen stepped out of the taxi, “a feminine product fell from her shorts followed by a clear bag with a white substance,” according to an arrest affidavit. “It’s not mine,” Kristen reportedly declared. “I’m supposed to give it to someone.” The “feminine product,” which is not further described in court filings, appears to have been keeping the baggie in its storage place. A deputy reported that Kristen “advised the white substance was ‘molly.’” Charged with possession of a controlled substance, she was booked into the county jail on the felony count. (https://bit.ly/2QJLlZR)

James Holzhauer’s streak of thirty-two consecutive Jeopardy wins ended Monday, with the professional gambler taking home a total of $2.4 million dollars. (https://nyp.st/2W7a9Mt)
Box Office Mojo is reporting that a wave of films featuring dogs as the lead characters have rejuvenated movie revenues over the past year.
(https://nyp.st/2KjsVxU)

SCOOP OF THE DAY: Brought to you by BetterCreditCards.net
Detroit police arrested two men who rammed a U-Haul truck into a bank and tried to rob it. (https://cutt.ly/fiqXga)

A Swedish company is creating rentable pogo sticks that will be available on the streets on San Francisco in the fall. (https://cutt.ly/FiqZ6n)

MSC Cruise Lines has launched an investigation into the Cruise Ship that rammed a dock in Venice on Sunday. A spokesperson assured the public that no one in the crew had been drinking. (https://cutt.ly/7iqZYF)

Vladimir Putin has successfully tested the world’s fastest missile that can travel up to 9,000 miles per hour. (https://cutt.ly/GiqHQy)

Sunday’s nationwide Google outage left users of “smart homes” unable to get inside their houses. (https://bit.ly/2IejZqW)


FUN FACT FOR YOU:
Share this with your friends... they'll think you're really smart!
Sean Connery Turned Down the Role of Gandalf. The wise wizard of The Lord of the Rings almost had a bit of a 007 vibe. Sean Connery was originally offered the role that Ian McKellen would make into a classic, but turned it down—despite the offer of a 15 percent stake in the franchise’s box office profits.


WEIRD NEWS: Brought to you by WeirdGiftOfTheDay.com
A man in Indianapolis reportedly called police to report the theft of his Subway sandwich. The circumstances into the disappearance of the sandwich were not immediately clear, but police were reportedly called to the scene after the entire foot of sandwich went missing sometime around 6:30 p.m. A police report obtained by the outlet has confirmed no arrests were made. Saturday’s alleged theft mirrors that of a similar theft in December, during which a thief in Polk County, Florida stuffed a gas-station sandwich – also of the foot-long variety – in his pants before absconding on a bike. Police in Indianapolis were not immediately available to respond to a request for comment on Saturday's incident or to confirm whether they’re hoping to recover the sandwich.
(https://fxn.ws/2Kg2Yzn)

34-year-old Matthew Brown of Atlanta was accused of robbing a Walmart store three times in one night. He stole $6,000 worth of merchandise. At 1:30 a.m. on March 22nd he entered Walmart and stole some electronic items. Dragging the items to his car he loaded them and drove away. Twenty minutes later he helped himself to more electronic items – loaded them in a shopping cart and left without paying. Once more, he loaded the items in his car and drove away. But was he finished? Nope. He returned to the store a third time and lifted more merchandise without paying for it, officials said. Some of the items he took included three 50-65-inch TV’s, a drone, an AT&T cellphone, a computer building kit, a flashlight, a Schwinn bicycle, a HP Pavillion Desktop computer, a PS4 racing wheel, and a Western Digital 6TB hard drive. He was charged with first-degree retail fraud, and if convicted faces up to five years in prison.
(https://bit.ly/2HRsl91)
THESE THREE THINGS!
What do these 3 things have in common:
A VCR—A TENNIS RACQUET—A PIN
(They have HEADS)