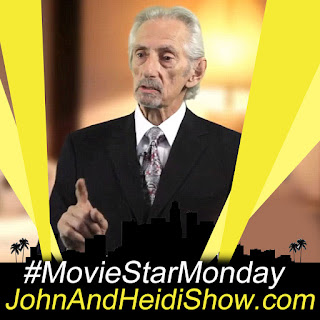 It's a #MovieStarMonday with Larry Hankin, known for his roles in TV shows Breaking Bad, Matlock, Friends and Seinfeld, as well as for his major role in Escape from Alcatraz (1979) with Clint Eastwood. Many other films include the Adam Sandler movie Billy Madison (1995), three John Hughes films, Planes, Trains and Automobiles (1987); She's Having a Baby (1988); and Home Alone (1990). IMDB - https://www.imdb.com/name/nm0359969/

A new study found that energy drinks may cause abnormal heart activity and rapid changes in blood pressure. (https://bit.ly/2EMVJen)

A Houston school bus driver who authorities say drove drunk with children on board has blamed her bad driving on an upset stomach caused by a doughnut. 55-year-old Linda Sue Godejohn was charged with driving while intoxicated after police say she failed a field sobriety test "miserably" when they pulled her over in Spring, Texas, on Thursday afternoon. Godejohn posted a $100 bond and was released from the Harris County Jail on Friday morning. Bystanders say they noticed her bus moving erratically and called 9-1-1. A witness says the bus swerved onto the left shoulder of a road, hitting a divider before veering back. Police say they pulled Godejohn over when they noticed the bus making a sharp turn, which nearly caused it to roll over. Godejohn made a statement to reporters as she left the jail, saying she hasn't had a drink in years and blamed her bad driving on a donut eaten earlier that day. (https://fxn.ws/2WkFSie)

Kevin Spacey returned to a Massachusetts court Monday to face charges of groping a busboy in 2016. (https://pge.sx/2wAxhbS)

George Michael left nothing to his two lovers in his $125 million dollar will and instead gave all the money to his sisters and dad. (https://cutt.ly/riqARE)

SCOOP OF THE DAY: Brought to you by BetterCreditCards.net
Forbes Magazine is reporting that Jay-Z has become the first billionaire rapper.
(https://cutt.ly/TiqHwG)

A video has gone viral of an alligator that snuck inside a Florida home. Luckily, police responded in minutes and took it away. The Gator snuck in after someone left a window open. (https://cutt.ly/2iqGG4)

A leading health researcher is warning that binge watching can be hazardous to your health because of the long hours and stationary lifestyle that comes with it.
(https://cutt.ly/MiqGzG)

The annual CFDA (Council of Fashion Designers of America) awards were handed out in Brooklyn and J.Lo was honored with the fashion icon award.
(https://eonli.ne/31aNlPM)

The temperature in India hit a record high of 123 degrees Monday.
(https://yhoo.it/2KhEJ3C)

FUN FACT FOR YOU:
Share this with your friends... they'll think you're really smart!
The word “sneeze” came about through a misspelling of the original word “fneze” or “fnese.” “Sneeze” is definitely a silly-sounding word. But it’s not quite as silly-sounding as “fneze” or “fnese,” which is how this bodily function was once spelled. According to the Oxford English Dictionary, the word “sneeze” originates from the Middle English word “fnese” and came about due to a “misreading or misprinting” of the original term. The dictionary writes that despite that, the word sneeze was “later adopted because it sounded appropriate.”


WEIRD NEWS: Brought to you by WeirdGiftOfTheDay.com
A man in central Florida told deputies he poured salt on the floor of a Walmart store to get rid of the evil spirits around him. The Pasco Sheriff's Office arrested 38-year-old Dameon Dean Cantrell early Sunday morning. A store manager told investigators a man poured salt on the floor and on his feet before walking into the woods near the store. The manager said he wanted the man charged with trespassing. A deputy found Cantrell laying under some trees in the woods, but still on Walmart property. He was arrested and taken to the Land O'Lakes Detention Center. (https://bit.ly/2WoRGjm)

A 20-year-old Tennessee woman stabbed her brother during an argument over a Playstation. Alliyah Chaney is now facing a charge of aggravated assault with a deadly weapon for the incident at an apartment just outside south Nashville. According to an affidavit, Chaney began arguing with her brother on Wednesday over a Playstation. The brother told police the situation escalated and his sister threw a knife at him, striking him in the chest. The victim told police his sister grabbed a knife because he was "getting loud" and “is big.” Chaney told police she's not afraid of her brother and that the victim was antagonizing her to stab him, so she did. (https://bit.ly/2wuUIU0)
THESE THREE THINGS!
What do these 3 things have in common:
Oboe, clarinet and saxophone?
(Reed Instruments)