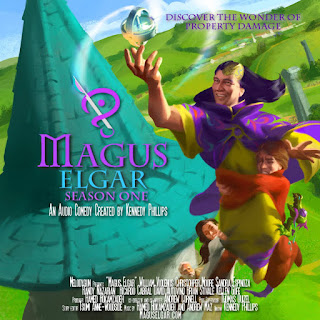 Today we'll visit with Kennedy Phillips about his new project Magus Elgar
Audio Drama about a magic caster and some scientists!
https://www.maguselgar.com/

A new survey found that Amazon has dethroned Google as the number one global brand in the world. (https://yhoo.it/2wNvpMV)

According to an arrest affidavit, a career criminal with multiple narcotics convictions on his rap sheet was wearing a shirt with “red lettering on the front that said ‘COKE’” when he sold four crack-cocaine rocks to a Florida undercover agent. 53-year-old Terry Leon Simmons was arrested Friday afternoon at his home in Fort Pierce on a felony cocaine sales charge. He was also hit with a second felony count after arresting officers spotted a marijuana joint and a bag of MDMA in plain view inside the residence. Cops charge that Simmons sold crack-cocaine to a driver who pulled up outside of a convenience store a couple of blocks from the ex-con’s apartment. At the time of the $40 transaction, Simmons was wearing a “two toned blue shirt with red lettering on the front that said ‘COKE’ on the front.” The arrest does not indicate whether the lettering was in the style of the popular soft drink. (https://bit.ly/2F2IwhK)

Pamela Anderson will star alongside her son Brandon Thomas Lee in the reboot of MTV’s “The Hills.” The new reboot will be centered around Brody Jenner and his friends. (https://pge.sx/2MIRlDC)

Actress Bella Thorne tweeted out nude photos of herself on Saturday night after a hacker threatened to release them himself. (https://cbsn.ws/2IJkvgO)

A screaming Turkish Airlines passenger smashed a cabin window and rushed towards the cockpit before guards subdued him Sunday. (https://bit.ly/2Zwfr6n)

A video has gone viral of a Detroit woman in a wheelchair who used a taser gun on a McDonald’s employee because her order was taking too long. (https://bit.ly/2WJCOr1)

During an interview to promote her new album, Madonna told “The Sun” that social media is destroying society. (https://bit.ly/2Im9aV7)

Italian Director Franco Zeffirelli, whose hits included “Romeo and Juliet” and “Jesus Of Nazareth,” died in Rome on Sunday at the age of 96. He was a great guy with a massive career.(https://bit.ly/2Rii60B)


Shania Twain is heading back to Las Vegas for a short residency.
(https://pge.sx/2RjOf7J)

Bill Cosby posted a belated Father’s Day message to his Instagram account and apologized for being so late. It happened at like 2:00 in the morning. (https://nbcnews.to/2WKrGz4)

OJ Simpson joined Twitter by posting a video in which he says he’s got some “getting even to do.” (https://bit.ly/2MT1kGQ)

FUN FACT FOR YOU:
Share this with your friends... they'll think you're really smart!
Casu Marzu cheese is purposely infested with maggots. If you ever come across maggot-infested food (yuck!), the best course of action is usually to throw the item into the trash as quickly as possible. However, those who make Casu Marzu cheese welcome the fly larva. With a name that literally translates to “rotten cheese,” the Sardinian delicacy starts as Pecorino Sardo. But, instead of being soaked in brine, it’s left out so that Piophila casei cheese flies can lay their eggs inside of it. The larva eventually hatches from the eggs and eats the cheese, which produces enzymes that lead to fermentation and decomposition in what will become the Casu Marzu.

In Suffolk County, New York, police say that 72-year-old Robert Simione was arrested and charged with a misdemeanor for reckless endangerment after pointing a laser at an Army National Guard helicopter last Wednesday night. Wearing night goggles, which intensify light, the crew were on a routine training mission in their UH-60 helicopter. Using their GPS system, “They basically just took a lock on where the beam was coming from and reported it to the police.” A police aviation section helicopter helped determine the laser beam came from a Shore Road residence. According to the Federal Aviation Administration's website, aiming a laser pointer at an aircraft has been a federal crime since 2012. (https://bit.ly/2KVHrwc)

THESE THREE THINGS!
What do these 3 things have in common:
an envious person, a rookie, the Wicked Witch of the West
(They’re all GREEN)