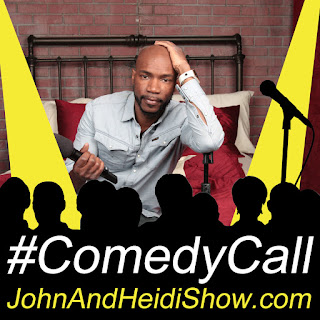 #ComedyCall with Ian Edwards... he has a new one hour special on comedy Central that premiers on Friday night!

A study by the American Psychological Association found that people who keep secrets are brought down by shame and not guilt. (https://bit.ly/2Y2f9al)

Lindsay Lohan is still receiving monthly subscription fees for her app from unsuspecting customers who’ve continued to have their credit cards charged since the app shut down in 2017. (https://pge.sx/2XME2qg)

Former Sopranos star Joseph Gannascoli is vacationing in the Dominican Republic despite a recent spat of fatalities. (https://pge.sx/2YCUruu)

A Massachusetts Judge is on the verge of dismissing the assault case against Kevin Spacey. (https://cbsloc.al/2xDbtNa)

SCOOP OF THE DAY: Brought to you by BetterCreditCards.net
Meghan Markle says she wants to adopt a rescue dog for her son, Archie.
(https://pge.sx/2JkB8ky)


A party boat burst into flames after being struck by lightning in South Boston.
(https://nyp.st/2G2gfIR)

A daredevil climbed London’s tallest building Monday with no ropes before being arrested by police at the top of the 1,017 foot building. They’re calling the guy “a Human Spiderman” (https://nyp.st/32heQYr)

A growing number of parents are hiring coaches for $80 an hour who can train their kids to live “phone-free” lives. (https://cbsloc.al/2G3DZMA)

Doctors are calling on Disney to recall its “Forky” toy from “Toy Story 4” after a study deemed it a choking hazard.(https://nyp.st/2G5b7Ua)

A massive crack in the earth that was caused by Friday’s earthquake in Los Angeles has become a major tourist attraction. (https://lat.ms/2XAQzsB)

A group of burglars cut through the roof of a Best Buy in Simi Valley, California and stole $93,000 worth of Apple Products.(https://bit.ly/2NIY9ll)

FUN FACT FOR YOU:
Share this with your friends... they'll think you're really smart!
Montana has a super toxic lake. If you’re looking for a place to go swimming in Montana, avoid Berkeley Pit at all costs. This super toxic lake opened in 1955 as a copper mine, which operated until 1982. Now, the lake is a mix of chemicals and heavy metals, such as copper, arsenic, cadmium, iron, and zinc. To understand just how toxic the lake is, know that in 1995, a flock of geese settled near the pit. Within a few days, their insides had been charred and some 340 birds were found dead, according to the Washington Post. Yikes!


WEIRD NEWS: Brought to you by WeirdGiftOfTheDay.com
According to police, a rival business owner spit, picked her nose, and urinated into containers at an ice cream parlor next door to the Florida food market she operates. Investigators allege that 66-year-old Jung Soon Wypcha was caught on videotape engaging last month in a series of vile acts at Lu Lu’s Ice Cream shop in Indian Shores, a town about 20 miles west of St. Petersburg. Wypcha, who runs the Indian Shores Food Mart, was arrested yesterday and charged with tampering with consumer products and criminal mischief, both felonies. Wypcha, cops say, ruined more than $2000 worth of ice cream, forcing the shop’s owners to close for several days. (https://bit.ly/2XBMKIG)

Police say a woman stole a vehicle after throwing a snake at the driver, then crashed through barricades set up for a pole-vaulting exhibition in South Carolina. In a statement, Greenville Police identified the suspect as 29-year-old Hilmary Moreno-Berrios. They she was hurt in Friday’s crash and released from the hospital Monday. Authorities say Moreno-Berrios demanded a woman’s keys and threw a live black snake at her. They say she then drove the stolen SUV with the snake still in it into barriers set up for the Liberty Bridge Jump-Off. Moreno-Berrios is charged with carjacking, malicious damage to property, and five traffic violations. It wasn’t known whether she had a lawyer to contact for comment on her behalf. Police say the snake wasn’t venomous and was released in nearby woods. (https://bit.ly/2JpGZoK)
THESE THREE THINGS!

What do these 3 things have in common:
A POCKET WATCH – DNA - McDONALD'S
(They have CHAINS)