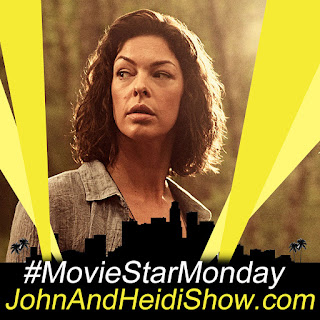 She is ANNE from Thw Walking Dead. She has a NEW MOVIE Darlin' out now.
AVAILABLE NOW - https://amzn.to/2lwrDVX

A study by the University of Waterloo found that teenage dieting is a gateway to other risky behaviors. (https://bit.ly/2JrxpjW)

A Pinellas County man is facing charges after police say he ripped windshield wipers off an SUV then used them to damage the car. Emil Werchola was arrested late Wednesday night. Police say the 64-year-old was sitting at a bus stop in the area, drinking alcohol from a Mountain Dew bottle and yelling at people. According to an arrest affidavit, Werchola put his walker in the road, blocking one northbound lane of traffic on Gulf Boulevard. Indian Shores officers warned Werchola about his behavior but noted that they still heard him yelling and cursing at people. Officers then say they witnessed Werchola walk up to a parked Lexus SUV and rip the windshield wipers off. Werchola used the windshield wipers to beat the vehicle, causing about $300 worth of damage. No one was in the SUV at the time. Werchola was arrested for disorderly intoxication and criminal mischief. (https://bit.ly/2NIMXoH)

Jennifer Lopez accidentally hit herself in the face and missed a dance step during her Las Vegas show.(https://pge.sx/2LIFJyD)

Marvel is auctioning off props from its canceled Netflix Shows.(https://nyp.st/2G8pSpt)

Ratings for “Love Island” fell by 30% off the premiere episode.
(https://bit.ly/2JsLYow)

The Bachelorette’s Hannah Brown decided that she was not ready to say goodbye to one of the guys during the rose ceremony so all FOUR of them are headed to the fantasy suite dates. This is unprecedented in bachelor/bachelorette history. (https://bit.ly/2JA8FpJ)

SCOOP OF THE DAY: Brought to you by BetterCreditCards.net
Major League Baseball Players are on pace to hit 1,100 more home runs than they did last year, sparking fresh rumors that we’ve entered another steroid era. One insider estimates that 95% of the league is on steroids again. (https://bit.ly/2JGPpH0)
Bob Forrester has been removed from his longtime role as CEO of Paul Newman’s salad dressing charity for inappropriate behavior towards female employees. (https://pge.sx/2LFQqSi)

Serena Williams has penned an essay in the August issue of “Harper’s Bazaar” in which she apologizes for her infamous outburst at last year’s U.S. Open.
(https://pge.sx/2Y2damp)

A French study found that the sugar contained in fruit juice may cause cancer.
(https://bit.ly/2XTMK5X)

An Illinois woman was arrested for driving with her kids sitting in an inflatable pool on the roof of her car. (https://on.today.com/2LPnasq)

A California man was arrested after police found fifteen tin foil wrapped burritos in his car that were filled with methamphetamines. (https://lat.ms/2NLMkLl)

A Canadian man is lucky to be alive after he fell into Niagara Falls at 4:00 in the morning and got swept over the 167 foot drop. (https://nyp.st/30t5WVU)

A Zoo in the Netherlands has brought in two older female rhinos to teach the young male rhinos about mating. (https://bit.ly/2NRq16S)

FUN FACT FOR YOU:
Share this with your friends... they'll think you're really smart!
Hippos produce a natural skin moisturizer and sunblock. Hippopotamuses spend their days under the blazing hot sun, which means their skin could really start to feel the effects of sun damage if they didn’t do anything about it. Fortunately, the creatures produce an oily substance that acts as both a natural moisturizer and a sunblock. The secretion, known as “hippo sweat,” contains microscopic structures that scatter light and protect the animals from burns.


WEIRD NEWS: Brought to you by WeirdGiftOfTheDay.com
A Florida homeowner was horrified when an iguana hunter shot a pool maintenance worker instead of a giant lizard with a pellet gun. According to the Boca Raton Police Department, a neighbor hired the iguana hunter to kill nuisance iguanas in the area. The Florida Fish and Wildlife said there are multiple ways to get rid of iguanas. Steve Kavashansky, owner of Iguana Busters, said, “our preferred method is a shot to the head, it’s quick, it’s humane.” The iguana hunter who hit the pool maintenance worker was not charged. (https://bit.ly/2XDzdLW)

According to a criminal complaint, minutes after being released from custody, a Florida Man sought to steal numerous vehicles in a jail parking lot because he needed wheels “to use for transportation.” 68-year-old Dennis Libonati was freed Monday evening from the jail in Land O’ Lakes after his sentencing earlier in the day for battery. Libonati pleaded guilty to the misdemeanor charge and was sentenced to 265 days of probation and ordered to attend an anger management class.Libonati had been locked up since his arrest in mid-March. The court complaint refers to the jail as the “LOL Detention facility.” According to police, upon Libonati’s release around 10:30 p.m., he entered a restricted area of the jail parking lot and attempted to enter 26 vehicles, all of which were locked. When cops confronted Libonati in the parking lot, he reportedly confessed to attempting entry into the vehicles “with the intent to steal one to use for transportation.” He was charged with 27 auto burglary counts and a single grand larceny rap. He is also facing a probation violation count.
(https://bit.ly/30hXJUD)
THESE THREE THINGS!
What do these 3 things have in common:
A horse & buggy—a bride & groom—a truck & trailer?
(They are HITCHED)