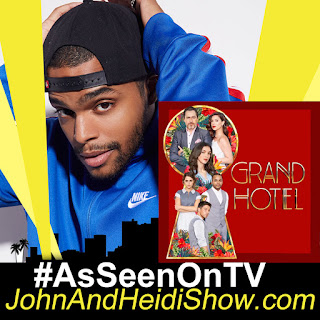 Today we visit with Chris Warren about GRAND HOTEL, MONDAYS AT 10/9 CENTRAL ON ABC TV. Chris is one of the most-watched actors in the entertainment industry today. He's made a name for himself through the dynamic and diverse characters he has brought to life on screen. His roles have captivated audiences over the years, and he isn't slowing down anytime soon. This summer Warren can be seen starring in ABC's highly anticipated drama series "Grand Hotel."

Directed and executive produced by Eva Longoria, the show follows the staff at a family-owned hotel in Miami Beach, where wealthy and beautiful guests bask in luxury, but scandals, escalating debt and explosive secrets hide beneath the picture-perfect surface. Warren is a scene-stealer as Jason, a kind and funny waiter who has worked at the hotel since his teenage years under his mother, the staff manager. "Grand Hotel" debuted on ABC June 17, 2019.

Some of Warren's best known credits include his role as Ty Hensdale on Freeform's hit drama series "The Fosters," executive produced by Jennifer Lopez. Additionally, Warren is often recognized for his role as Zeke in Disney's worldwide phenomenon "High School Musical," appearing in all three films. He also held a leading role in "Alvin and the Chipmunks: The Squeakquel," which grossed $440 million worldwide.

A study published in the Journal of Royal Proceedings found that chimpanzees bond over watching movies together. The study showed them Chimpanzee dramas, like “Project X.” (https://bit.ly/2xTAB2s)

Police allege that a man left two children--one of whom suffers from brain damage and is severely autistic--home alone early Friday while he spent four hours at a Florida strip club. 48-year-old Kalvin Dywane Guice has been charged with a pair of felony child neglect counts in connection with his late-night excursion to the 4 Play Gentlemen’s Club in St. Petersburg, which is about nine miles from the residence where he was supposed to be supervising the children. A criminal complaint does not reveal Guice’s relationship with the minors, whose mother was in Georgia attending her mother’s funeral. Guice, cops say, “was left to care for the children during this time.” According to investigators, Guice admitted leaving the children home alone while he was at the strip club, where he consumed four or five Jack and Cokes. Guice was released from the Pinellas County jail after posting $5,000 bond. A judge has ordered him to have no contact with the two children. (https://bit.ly/2xMVTyu)

If there was any doubt that the 2019 box office belonged to the Walt Disney Co., this weekend put an end to it. Not only did its remake of The Lion King devour opening weekend records for the month of July and a PG-rated film, but Avengers: Endgame also crept past Avatar to become the highest-grossing film of all time.
The season two finale of Big Little Lies aired on Sunday, and the show has not yet been renewed for another season. But at least one member of the cast is ready for a third go-around: Nicole Kidman. The actress aid she would “love” to continue working on the hit HBO show because there are “certainly ideas. But we would not do it without all of the same people involved — even the kids.”

SCOOP OF THE DAY: Brought to you by BetterCreditCards.net
A Florida dad was arrested for throwing his 5-year-old son off of a dock and into the ocean so he could teach him to swim.(https://nyp.st/2xQTovf)
To demonstrate how hot it was in Omaha, the National Weather Service baked biscuits inside a parked car.
Kids 8 to 12 in the U.S., the UK, and China were recently polled in honor of the 50th anniversary of the Apollo 11 mission. Kids in the U.S. and the UK were three times as likely to want to be YouTubers or vloggers as astronauts, while kids in China were more likely to want to be astronauts.
German police had to rescue a 20-year-old man from a train station suitcase locker after he shut himself in for fun. Alcohol was involved.

A video has gone viral of a mini-van falling down a sinkhole in Virginia. Authorities tried to save it but they were forced to give up. The good news is no one was in it. (https://fxn.ws/30vRahf)

Employees staged two walkouts during Monday's “Prime Day” promotion at the Amazon Fulfillment Center in Shakopee, Minnesota. It made headlines around the country. (https://bit.ly/2NVLWtw)

A study by the University of Hong Kong finds that quitting alcohol will improve a person’s mental wellbeing. (https://bit.ly/2SkykGX)

Federal Authorities transported Mexican Drug Lord El Chapo to a Colorado super-max prison Thursday where he will stay for the rest of his life.
(https://nyp.st/2Ss7r3R)

FUN FACT FOR YOU:
Share this with your friends... they'll think you're really smart!
The oldest bookstore that is still in operation was established in 1732. Shops that sell the written word are becoming increasingly rare these days. However, Bertrand Bookstore in Lisbon, Portugal, will hopefully stand the test of time. The shop, which is now part of a nationwide chain that includes 47 other stores around the country, was opened in 1732 and is the oldest operating bookstore in the world.


WEIRD NEWS: Brought to you by WeirdGiftOfTheDay.com
A Nebraska woman has been fined $1,000 for climbing the Mount Rushmore National Memorial in South Dakota. Authorities say Alexandria Incontro scaled the massive granite sculpture Friday with bare feet and no rope. She made it to about 15 feet from the top. The Rapid City Journal said Incontro chose a route between George Washington and Thomas Jefferson, whose faces are about sixty feet tall. Several signs at the popular tourist destination warn against trespassing on or climbing the sculpture, which was completed in 1941. A federal officer and national park ranger persuaded Incontro to come down, and she was handcuffed and arrested. Incontro, who is from Omaha, appeared Monday in Rapid City federal court, where she pleaded guilty to climbing the monument. (https://bit.ly/2LrKm0u)

According to a new report, a Texas teen was busted for spitting into a bottle of Arizona Tea at a local grocery store — and then placing the tainted drink back on the shelf. Cops were dispatched Monday night to the Albertsons Market in Odessa, where they viewed security camera footage showing the boy picking up the drink, putting his mouth on it and then putting it back. The teen confessed to the store’s asset protection manager and police that he took a swig of the beverage, spit in it and then put it back because it was “gross.” He’s been charged with tampering with a consumer product — a second-degree felony — and is being held at the Ector County Youth Center. In another recent Texas tampering incident, a teen was busted after she licked a tub of Blue Bell ice cream and put it back on the shelf. Video of the sick prank went viral.
(https://nyp.st/2LyNIim)
THESE THREE THINGS!
What do these 3 things have in common:
a gymnast, a decathlete and a bank?
(They have VAULTS)