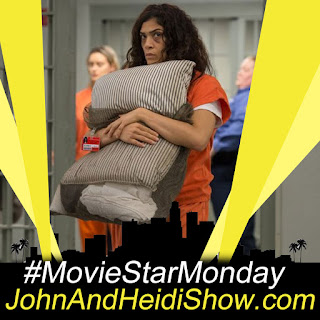 It's a #MovieStarMonday with Laura Gomez. In addition to several movies, Laura is known as BLANCA from the smash hit Orange Is The New Black! The final season is hitting Netflix now. https://www.netflix.com/title/70242311

A new study found that the average person spends more than six months of their life talking about the weather.

Aware that she was wanted on a probation violation charge, 31-year-old Floridian Arayia Hudson turned herself in at the Pasco County jail in Land O’ Lakes, a Tampa suburb. Hudson, who was convicted last year of grand theft, arrived at the lockup “wearing a hair piece.” As with any incoming inmate, Hudson was subjected to a search, which included an examination of her hair, both real and synthetic. It was during that review that “contraband was located in the skull cap lining of the hair piece.” Specifically, Hudson had 94 pills atop her head -- 35 capsules of Gabapentin and 59 pills of Tramadol. The criminal complaint does not indicate whether Hudson forgot about the pills in her hairpiece or intended to smuggle them into the jail. Either way, Hudson was charged with felony narcotics possession and introducing contraband into a detention facility. She is being held in lieu of $7,150 bond. (https://bit.ly/2YF6Ilm)

The big rumor in showbiz is that Lindsay Lohan is dating the Crown Prince of Saudi Arabia.(https://pge.sx/2Tf16Jt)

Three people were attacked by a shark within 24-hours at the same beach in New Smyrna, Florida. (https://bit.ly/2GQlSKu)

Former Ohio basketball standout D.J. Cooper failed a drug test in the European Basketball League after he used his girlfriend’s urine and the results showed he was pregnant. The craziest part of this story is that he claims he didn’t even know that SHE was pregnant. (https://bit.ly/33gm0MO)

The record industry is preparing for a wave of copyright lawsuits after a Judge ordered Katy Perry to pay $2.8 million dollars for ripping off a christian rap song. Katy said the judge made a, quote, “terrible decision.”
(https://on.wsj.com/2ZK5BOs)

A video has gone viral of a car slamming into a house in Milwaukee. Amazingly, nobody was hurt and nobody was drunk. (https://bit.ly/2yLSdhg)

Prince Harry posted an Instagram tribute to Meghan Markle for her birthday in which he referred to her as his “amazing wife.” (https://pge.sx/2Kmf5ZO)


The FDA has ordered several companies to stop sales of their flavored e-cigarettes which attract children.

FUN FACT FOR YOU:
Share this with your friends... they'll think you're really smart!
The Easter Island heads have torsos. You know the heads of the Easter Island figures, but often overlooked is the fact that they also have bodies. Archaeologists at the University of California, Los Angeles have developed the Easter Island Statue Project to dig deeper into these Pacific Island icons and explore what’s below the surface. The answer? Full-bodies statues measuring as much as 33 feet high.

A Brazilian gang leader dressed as his teenage daughter in an attempt to escape from a high security prison. Unfortunately, he like, totally got caught, OMG. And to make matters worse, now the photos have surfaced of him dressed as a teenage girl. (https://bit.ly/31kSVyc)


WEIRD NEWS: Brought to you by WeirdGiftOfTheDay.com
A British man who changed his name by deed poll to Kenny Fu-Kennard has been denied a passport because his name is considered too rude. The former soldier from Cornwall applied for a new passport earlier this year, but had his application rejected on the basis that his name “may cause offense”. Fu-Kennard decided to change his name to “something with a bit of ‘fun’ about it” after eight years of military service. He had previously changed his name to Coco Kenny at the age of 16, but was directed to change it back upon joining the army three years later after being told it was “immature”. Fu-Kennard refuses to change his name, claiming that his freedom is being restricted. The 33-year-old now faces a future of UK holidays, despite his love for travel. He said, “Without a passport, I can’t go on holiday abroad. I live in a seaside town, but have always enjoyed traveling.” (https://bit.ly/2ZGgMaW)

According to court records, the Indiana man who accidentally shot himself in the penis with an unlicensed handgun has pleaded guilty to a weapons charge for which he was sentenced to sixty days in jail. 47-year-old Mark Anthony Jones was arrested in late-February after the Hi-Point 9mm handgun he was carrying in his waistband discharged as he was walking on a street in Marion. Jones told cops that when the gun “began to slip,” he “reached down to adjust the firearm,” which then discharged. Police reported that, “The bullet entered just above his penis and exited his scrotum.” Jones, who was charged with carrying an unlicensed handgun, pleaded guilty to the misdemeanor count during an August 1st court appearance. A Marion City Court judge then sentenced Jones to sixty days in the county jail. (https://bit.ly/2ZGOmxG)

THESE THREE THINGS!
What do these 3 things have in common:
South, Barber, Telephone (Answer: Pole)