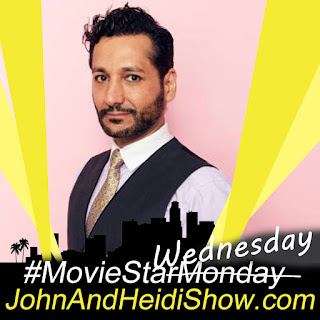 Cas Anvar, lauded for performances opposite Jake Gyllenhaal in Source Code, Naomi Watts in Diana, Brie Larson in Academy Award®nominated picture Room as well as the forthcoming Veena Sud narrative The Lie, is in Los Angeles beginning Thursday, July 25 - Friday morning, Aug. 2 specific to the release of his newest film in which he stars alongside Diane Kruger and Martin Freeman in the international spy thriller, THE OPERATIVE, which opens nationwide on Friday, August 2nd.  Recently rising to the status of prime time star for captaining The Expanse as cowboy pilot, 'Alex Kamal' which premieres on Amazon Prime in December after a Comic Con 2019 rollout.
The Operative is in theaters now – TRAILER LINK - https://www.youtube.com/watch?v=MfvSsvj3fwQ

A survey found that Lagos, Nigeria has the worst traffic in the world.
(https://cnn.it/2yCHu8C)

An El Paso school district has suspended its superintendent after San Antonio police reported he was inebriated at a Whataburger when he head-butted another superintendent. The school board for the Ysleta Independent School District on Tuesday suspended Superintendent Xavier De La Torre for three days without pay for not promptly telling the board about the June altercation. De La Torre was in San Antonio with other educators for training provided by the Texas Association of School Boards. A police report said he appeared to be intoxicated and head-butted the superintendent for the Socorro Independent School District, which covers much of El Paso County. De La Torre, who earns nearly $314,000, in a statement last week denied he was the aggressor and said he didn't head-butt anyone. (https://bit.ly/2yFRhuA)

Disney has officially confirmed that there’s a “Home Alone” reboot in the works.
(https://bit.ly/2YO9pRL) Macaulay Culkin had some thoughts. He joked on Instagram: “This is what an updated Home Alone would actually look like,” alongside a photo with his belly sticking out, leftovers in his hand and a laptop placed in front of him. https://www.instagram.com/p/B04MLVuA1ye/?goal=0_c01849cdd6-4121e5945a-264008501

The producer of the Emmy Awards announced that this year’s ceremony will not have a host. (https://bit.ly/2YNx4xC)

SCOOP OF THE DAY: Brought to you by BetterCreditCards.net
Doctors are warning that the bowls used at Chipotle have been linked to cancer causing chemicals.(https://bit.ly/2OKssIV)

The makers of Arizona Iced Tea are going to start selling marijuana drinks, gummies, and vape pens. A lot of these vape pens have been catching fire.
(https://on.wsj.com/2yL6RFu)

A Nielsen Ratings Survey found that Fox News is the number one news site on the web. (https://bit.ly/2nzXRyH)

A Jenny Craig study found that people in a long-term relationship gain an average of thirty-six pounds! (https://bit.ly/31okKWa)

A new study found that erectile dysfunction is linked to poor work function and a lower quality of life. (https://bit.ly/2M7MGtR)

A Florida man was arrested for smoking pot but he told the cops he was only doing it because he was about to hang out with Jesus. The arrest report says he also smelled like alcohol. (https://bit.ly/2YQX7Ea)

An Arizona Postal Worker cooked a steak on the dashboard of his van to show his bosses how hot it gets during his shift. (https://bit.ly/2YLr38M)

FUN FACT FOR YOU:
Share this with your friends... they'll think you're really smart!
Lakes Can Explode. When we think of lakes, we usually think of tranquility and summers relaxing by them—not lethal explosions. But Africa has experienced just that sort of thing over the years, when bursts of volcanic gases rise to the surface, leaving destruction in their wake. For example, in August 1986, gases below Lake Nyos in Cameroon, which sits above the 950-mile-long chain of volcanoes known as Cameroon Volcanic Line, became concentrated and when it came to the surface, “an explosive degassing of 1.6 million tons of carbon-dioxide occurred, forming a 160 feet high cloud,” according to Forbes. It killed 1,700 people as a result.

A growing number of Japanese women are marrying themselves so they can have more freedom in their lives. ( https://cutt.ly/n6RTXv )


WEIRD NEWS: Brought to you by WeirdGiftOfTheDay.com
Shocking footage of a man in India cutting his birthday cake by shooting it with a gun was recently seen online. Footage shows the unnamed 24-year-old brandishing the allegedly illegal firearm while celebrating with his group of friends earlier this week. Dozens of men huddle around the treat after it is placed on the floor and begin to cheer on the man. The man then recklessly fires a single bullet at the cake and bursts into celebratory song after successfully slicing it in half. Police are currently investigating the alleged possession of the illegal firearm in Uttar Pradesh, North India. A police spokesman said: “We have taken the cognizance of the matter and the video has come to our notice, we will soon initiate strong action against the youth possessing illegal firearms.”
(https://bit.ly/2OKU94t)

A Florida man was arrested this week after pointing a gun at two deliverymen when they arrived late with his furniture — threatening that he has “shot people for less.” The suspect, 55-year-old Mitchell Helton of Manatee County, immediately began complaining when the deliverymen showed up late with the furniture he ordered. The men asked if he still wanted the furniture and Helton allegedly told them to “do whatever you want.” He then allegedly grabbed his gun and pointed it at both of the men as he walked out of his house. “You know, I’ve shot people for less,” he allegedly said. The deliverymen called the police after the threat, and Helton was arrested soon after. According to the report, he was charged with two counts of aggravated assault and is being held on $5,000 bond. (https://bit.ly/2YR5cN9)
THESE THREE THINGS!
What do these 3 things have in common: Freudian, Half, Sales (Answer: Slip)