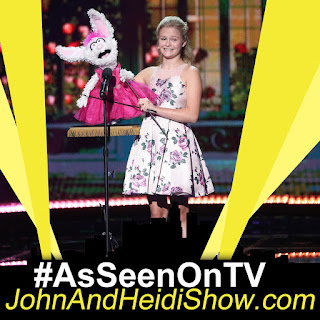 Darci Lynne Farmer
Winning NBC’s “America’s Got Talent” at just 12-years old by the most votes for a final performance in the history of the show, singer/ventriloquist Darci Lynne Farmer impresses audiences across the country with her sweetheart disposition and undeniable, show-stopping talent beyond her years. https://www.darcilynne.com/

SURVEYS, STUDIES & SUCH: Brought to you by BetterCreditCards.net
A study by the University of Colorado found that getting over ten hours of sleep per night will DOUBLE your risk of a heart attack. (https://dailym.ai/2jXGRTv)
BRAIN ON DRUGS:
Brought to you by TimeForRehab.com! Each day we talk about people doing dumb things under the influence, but addiction is no laughing matter… if you or someone you know needs help, we're here to help! You can learn more at TimeForRehab.com.

A Milford, Maine man allegedly tried to fight a police officer Sunday morning as the officer administered a drug test at the police station. 29-year-old Matthew Jones was stopped by Penobscot Nation police on Indian Island at approximately 6:00 a.m. Sunday for allegedly driving under the influence of drugs. Penobscot Nation police brought Jones to the Holden Police Department for a drug test, according to Holden police Chief Chris Greeley. Jones attacked Lt. Eddie Benjamin as the lieutenant was administering the drug test. Benjamin restrained Jones without any injuries to either of them. Jones was taken to a Bangor-area hospital “because he was under the influence of a drug, and we wanted to make sure he was OK,” Greeley said. As a result of the scuffle, Jones was charged with assault, refusing to submit to arrest or detention, violation of bail conditions, and unlawful possession of drugs.
(https://bit.ly/2LaMwir)
BIG SCREEN-LITTLE SCREEN: Brought to you by ChannelSurferTV.com

Kevin Hart’s wife, Enniko Parish, says he’s doing great after a wild car crash in Los Angeles over the weekend. A lot of people think Kevin was driving but it was actually his friend. (https://pge.sx/2k1dvne)

Tracy Morgan paid a New York City bartender to watch his $2 million dollar Bugatti while he was eating dinner in Manhattan over the weekend. (https://pge.sx/2lBIp5P)


SCOOP OF THE DAY: Brought to you by BetterCreditCards.net
One man's passion for University of Oklahoma football pushed him to make his own football field in his backyard. A former pasture in Blanchard, Oklahoma, is now a 1/10th scale copy of the most famous football field in the state. The field meant hours of earthmoving and mowing for Owen Pickard. The field numbers were hand-drawn on a stencil by his 81-year-old grandfather. Numerous nieces and nephews use the field for fun, and Pickard is hoping his very young son takes his first steps on the field.

The U.S. Surgeon General is warning that marijuana could have catastrophic consequences on pregnant women. (https://bit.ly/2kq4QuA)

A Tennessee man is suing Popeyes because they ran out of chicken sandwiches. (https://bit.ly/2lQ9y5c)

A video of an American Airlines passenger who took an emotional support horse on a flight from Chicago to Omaha has gone viral. (https://bit.ly/2lOHlvB)

A video of a rat jumping into a deep fryer at a Texas Whataburger has gone viral. (https://bit.ly/2lu1Aif)

New Jersey has overtaken Las Vegas as the official sports gambling capital of the world. (https://bit.ly/2lsT7vz)

FUN FACT FOR YOU:
Share this with your friends... they'll think you're really smart!The Largest Earthquake in the World Hit Chile. The worst earthquake to ever hit the Earth struck Chile on May 22, 1960. The 9.5-magnitude quake in Valdivia killed as many as 6,000 people and left 2 million people homeless, according to the Chilean government.

Prince Harry held a press conference in Amsterdam to address the criticism he received for flying on private jets despite the fact that he’s constantly lecturing people about climate change. (https://dailym.ai/2lQSBrl)

WEIRD NEWS: Brought to you by WeirdGiftOfTheDay.com
Authorities in a German city said they evacuated about thirty residents from an apartment block after a venomous cobra escaped from a home and was spotted slithering in a hallway. Officials in Herne said the 4.6-foot cobra is believed to have escaped from a resident's apartment Sunday and has since been spotted slithering in a hallway in the apartment block, which is composed of four buildings connected by a cellar. About thirty residents were evacuated from the apartment block and firefighters were searching the building for the missing snake Thursday morning. Officials said the cobra is believed to be somewhere in the cellar of the building, but people walking nearby are being warned to avoid the high grass as a precaution. A local hospital is keeping the antivenom for the cobra's bite on hand in case of an attack. The cobra escaped from the home of a man who was found to be keeping about twenty other snakes in his apartment. The reptiles were seized from his residence. (https://bit.ly/2ZDrwtZ)

West Virginia state Sen. Mike Maroney has been charged with soliciting a prostitute. The Republican lawmaker turned himself in and was arraigned Wednesday morning, a Marshall County court clerk said. He has pleaded not guilty and paid a $4,500 bond. Maroney exchanged text messages to discuss prices and set up meetings with a woman who has acknowledged being a prostitute. He also sent her a picture of himself smiling along with a message reading “now can I stop by” after she said she wouldn’t meet without a photo of him. Police have been investigating the woman, Cortnie Clark, and say two people have already pleaded guilty to soliciting her for sex. She has been criminally charged and has told police she became a prostitute so she could buy heroin. Her attorney didn’t immediately return a message left at his office. West Virginia Senate President Mitch Carmichael issued a statement saying the allegations are “deeply disturbing” and that further statements would be released as the case continues. (https://bit.ly/2HyAGOl)
THESE THREE THINGS!
What do these 3 things have in common:
THE SUEZ CANAL—RAPUNZEL—SCOTLAND (They all have Locks or Lochs)
Newer Post Older Post Home