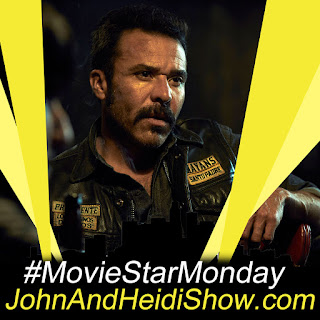 It's a #MovieStarMonday with Michael Irby... we'll chat about his starring role as ' Bishop’ on MAYAN’s (season 2 premiered September 3rd on FX) and his role as the hilarious and intriguing Cristobal Sifuentes on HBO’s “Barry". Irby is known for portraying Sergeant First Class Charles Grey in The Unit. ….also SEAL TEAM ...Irby’s television credits include Taken, True Detective, Almost Human, Line of Fire and The Haunted. Feature credits include Pinero, Flightplan and Fast Five.
https://www.fxnetworks.com/shows/mayans-mc

A Wallet Hub Survey named New York and New Jersey as the worst states in the country to drive in. (https://bit.ly/2m0XvCt)

Court documents said that a woman in Davis County, Utah was arrested on Saturday for charges of drug possession, driving with a revoked license, and offering false personal info to a police officer. 38-year-old Heather Garcia was pulled over on Main Street in Farmington after an officer noticed her Silver BMW did not have a license. Davis County Police performed a vehicle search and found drug paraphernalia and a white powdery substance. Officers tried to gather information from Garcia during the arrest. She told officers her name was Mercedes and was born in 1998. Officers soon realized through a record check that the identity Garcia had offered was actually her daughters. Once police were able to make a positive ID on Heather Garcia, they discovered she had outstanding warrants. Court documents show she is currently in Davis County Jail under her active warrants and new charges.
(https://bit.ly/2krNxcy)

The first trailer has been released for the new “Bad Boys For Life” movie starring Will Smith and Martin Lawrence. (https://bit.ly/2kvpDNw)

Lori Loughlin’s daughter Olivia Jade has told friends that she’s extremely concerned that her college admissions scandal could cause her parents to get divorced. (https://dailym.ai/2lALH9L)

SCOOP OF THE DAY: Brought to you by BetterCreditCards.net
Taco Bell is removing nine items from its menu. (https://bit.ly/2lEjpeg)

Johns Hopkins University is opening a new research center devoted to the use of Magic Mushrooms. Magic Mushrooms can be used to help people who suffer from chronic pain. (https://bit.ly/2ksXwhV)

A Department of Defense Study found that the Navy is the fattest branch of the Armed Forces.(https://bit.ly/2kwIGa3)

A California Delivery driver got so drunk he fell out of his truck as it was turning.
(https://bit.ly/2lG3jRi)

A video of a bear that passed out in the bathroom of a Montana Hotel has gone viral. It was a Black Bear. (https://fxn.ws/2lxTTYn)

An American woman was busted at a Philippines Airport for carrying a 6-month-old baby inside her luggage. (https://bit.ly/2lZOKse)

FUN FACT FOR YOU:
Share this with your friends... they'll think you're really smart!
Fresh Water Is Disappearing. Okay, it’s not exactly Mad Max, but as glaciers retreat as a result of climate change, they are taking fresh water supplies with them. Take, for example, the Canadian Arctic, which contributes 10 percent of the world’s melting ice, yet was found to lose a massive volume (equal to about 75 percent of Lake Erie) between the years of 2004 and 2009.

A video of a Therapy Falcon flying with a passenger on a flight to Saudi Arabia has gone viral. (https://bit.ly/2kuKO2c)

A Pennsylvania man has been sentenced to six months in prison for trafficking protected turtles. The U.S. Attorney's Office for the Eastern District of Pennsylvania says David Sommers on Thursday was also ordered to pay $250,000 in restitution for poaching thousands of protected diamondback terrapins and their eggs from coastal marshes in New Jersey and illegally selling them. In a deal with prosecutors, Sommers pleaded guilty in February to false-labeling of packages containing terrapins. Diamondback terrapins are a semi-aquatic species of turtle native to brackish waters in eastern and southern United States. They aren't found in Pennsylvania, where Sommers resided, but have a dwindling habitat range in New Jersey. Terrapins are prized in the reptile pet trade for their unique shell markings. The turtles are protected under New Jersey law and by international treaty. (https://6abc.cm/2krmi1V)

An Australian vegan has a beef with her neighbors over what she claims is the smell of meat and fish coming from their barbecue. Cilla Carden has been locked in a legal battle since last year with her neighbors, claiming that the odors have ruined her quality of life at her home in Perth. “All I can smell is fish,” Carden told the news station. “I can’t enjoy my back yard. I can’t go out there.” Carden’s complaint was tossed out of court earlier this year, leading her to file to appeal in the country’s supreme court. The supreme court judge rejected her appeal in July and encouraged both parties to instead “direct their considerable energy towards the resolution of their differences as best they can.” But Carden has vowed to continue the fight against her neighbors and return to court.
(https://bit.ly/2krqD56)
THESE THREE THINGS!
What do these 3 things have in common:
rod—heater—gat? (Slang terms for a HANDGUN)