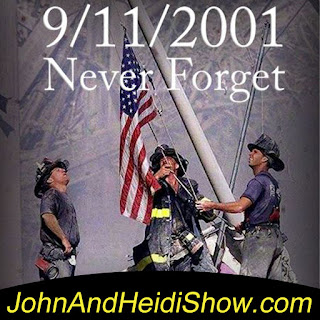 Airline Pilot Beverly Bass, she was diverted to Gander Newfoundland on 9-11. There is a new documentary about the experience they had that week when the size of this little welcoming town almost DOUBLED! The movie is in theaters ONE NIGHT ONLY (9-11-19) You Are Here: A Come From Away Story https://www.imdb.com/title/tt9205986/?ref_=vi_md_ti

A British survey found that 22% of senior citizens go an entire week without talking to someone. (https://bit.ly/2kAqoVr)

A 75-year-old Louisiana woman has been arrested for allegedly arranging for drugs to be smuggled to her son in a county jail. Cops charge that Judy Futch twice delivered Suboxone, an opioid addiction medication, to an “inmate job site” outside of the Ouachita Correctional Institute so that inmates could later deliver the narcotics to her 46-year-old son Derrek. A criminal investigation was opened last week when deputies discovered Suboxone “at one of the inmate workers jobs.” When confronted by cops, Futch denied involvement in any smuggling. When shown photos of her carrying a bag at the job site, Futch claimed it contained “hamburgers for the inmates.” Futch subsequently confessed to “buying Suboxone and bringing it to the job site” at her son’s direction. Futch said she “has done it approximately two times.” She added that she paid a total of $300 for fifteen Suboxone pills. She was arrested on felony conspiracy and narcotics possession charges. (https://bit.ly/2kub0tG)

“IT: Chapter Two” won at the box office with a $90 million dollar haul. Two hundred clowns showed up to protest at a theater in New York. (https://bit.ly/2kB0fWx)

“The Joker” with Joaquin Phoenix won top honors at the Venice Film Festival and Director Roman Polanski came in second place for his film, “An Officer And A Spy.” (https://bit.ly/2lEu9tc)

SCOOP OF THE DAY: Brought to you by BetterCreditCards.net
A survey of public health officials found that leprosy is the next crisis expected to hit Los Angeles because of their homeless problem. (https://bit.ly/2kAVwEf)

An 82-year-old man was arrested in New York for a five-year burglary spree in which he snuck past doormen to steal over $400,000 in jewelry from people’s apartments. The 82-year-old man convinced doormen he lived in their buildings and then beat-up homeowners and took their jewelry. (https://cnn.it/2kyHgMg)

Rhode Island Police arrested a burglar who broke into Taylor Swift’s home and took his shoes off while he looked for her. The craziest part of this story is that the cops found him sitting barefoot in her library and he told them he took his shoes off to be polite. (https://pge.sx/2kbgVUA)

Mick Jagger told protesters at the Venice Film Festival that he’s right behind them in their efforts to fight climate change.(https://yhoo.it/2kzZxJ4)

FUN FACT FOR YOU:
Share this with your friends... they'll think you're really smart!
The Tallest Mountain in the World Is Not Mount Everest. Though it is the highest mountain in the world (at 29,029 feet above sea level), it is not the tallest. That distinction goes to Hawaii’s Mauna Kea Volcano, which measures 33,476 feet from its base to its top. It’s a great place to take in views of the night sky thanks to the very dry atmosphere, and a popular spot for both amateur astronomers and snowboarders.

A Swedish behavioral scientist is suggesting that eating humans may save the planet. (https://bit.ly/2khSYLo)


WEIRD NEWS: Brought to you by WeirdGiftOfTheDay.com
A Florida man was concerned his beloved smart car would get blown away in Hurricane Dorian this week, so he moved it to a very safe place. The inside of his house. Jacksonville native Patrick Eldridge told CBS News he put his smart car inside his house on Tuesday morning, adding that his "wife was impressed that I was right about it being able to fit into the kitchen." His wife, Jessica, posted hilarious images of the small car inside the Florida home to Facebook on Tuesday morning. "My husband was afraid his car might blow away," she wrote. "And my car is in the garage.” The couple moved the vehicle out of their home after the storm weakened and moved away from Florida. While his car didn't need protecting after all, the man said he did learn valuable information from the experience. “We now know that we have one additional parking spot available though!” he joked. (https://cbsn.ws/2lE8elM)

School officials say that a 3-foot-long ball python escaped from its cage inside a Wisconsin high school — and is believed to be hiding out inside a science lab ventilation system. The snake — a science teacher’s pet named Kai — is suspected to have busted out of its cage inside a classroom at Fond du Lac High School sometime during the Labor Day holiday weekend, principal Matt Steinbarth said Wednesday. Firefighters in Fond du Lac were unable to track down the nonvenomous constrictor on Tuesday — the first day of classes for freshmen at the 2,000-student school — despite using a thermal imaging camera. The snake’s suspected whereabouts were narrowed down after school officials consulted two herpetologists and a local snake expert. the principal said the snake, which is often used by a science teacher during biology class, shouldn’t be considered a threat to students. (https://bit.ly/2lxAJSr)
THESE THREE THINGS!
What do these 3 things have in common:
DAGWOOD--GRINDER--HOAGIE?... (Sandwiches)