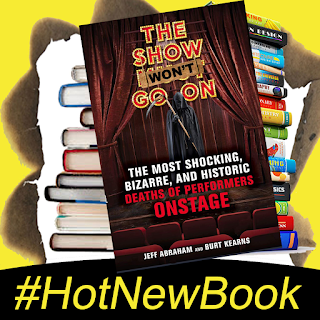 Today we talk with Jeff Abraham, the co-author of a new book (with Burt Kearns) titled “The Show Won't Go On: The Most Shocking, Bizarre, and Historic Deaths of Performers Onstage” the first book of its kind, an exploration of a neglected though legitimate section of entertainment history -- performers who died onstage. The book is a celebration of lives and careers in many genres of show business, both famous and obscure who have all have one thing in coming – they all died "doing what they loved."
AVAILABLE NOW - https://amzn.to/2MZDffz

A study by the University of Adelaide in Australia found that driver-less cars will create more congestion on the roads because people will be less likely to carpool. (https://bit.ly/2BM3L5v)

A man spotted riding a Segway in the wrong direction on a Florida road is facing a drunk driving charge, according to cops who report that the suspect admitted drinking nearly two bottles of wine before piloting the self-balancing vehicle. 48-year-old Andy Sigears was busted Wednesday after a cop saw him “going head on” into cars on a road in Davenport, a city about 35 miles south of Orlando. Sigears, who lives in Davenport, “made multiple spontaneous statements” about being drunk and being an alcoholic. Cops say Sigears smelled of booze and showed other signs of intoxication during field sobriety exercises. Subsequent tests showed Sigears’s breath alcohol level to be around three times the legal limit. Sigears, who is listed as retired in court records, was charged with DUI. Florida criminal statutes classify the Segway as a motor vehicle since it is “operated on the roads of this state, used to transport persons or property, and propelled by power other than muscular power.” (https://bit.ly/2P94c1E)

“Joker” was number one at the box office again, earning another $19 million this weekend.(https://bit.ly/2JJpq2P)

Ben Affleck addressed a leaked video that shows him drinking at a Halloween party despite the fact that he’s supposed to be in REHAB. (https://pge.sx/36c05YL)

Costumes sales were DOWN for a second straight year. (https://bit.ly/2Nl2Azh)

The wildfires continue to rage in Southern California. The heat is hot enough to melt plastic from two miles away.(https://lat.ms/2pkstHy)

A Texas Fisherman saved a dolphin that was attacked by sharks.(https://bit.ly/2MXedh3)

A New Jersey woman who was caught with marijuana at a Russian Airport has been sentenced to seven years in prison.(https://bit.ly/2PnSrVf)

International Art Experts are trying to determine if a second copy of the Mona Lisa was also painted by Leonardo da Vinci. They’re actually doing a DNA test on the painting to figure it out. (https://bit.ly/31TMwKj)

FUN FACT FOR YOU:
Share this with your friends... they'll think you're really smart!
Approximately 10-20% of U.S. power outages are caused by squirrels. Harmless and cute as they seem, these fuzzy little creatures aren’t as innocent as you think! Squirrels have a tendency of chewing the wires, but luckily it’s a simple fix.


NEWS HEADLINES.... FROM SOMEWHERE IN THIS WORLD!
Dateline.... China

Police say a woman who was angered when she was kicked out of a Las Vegas-area casino intentionally drove her motorhome into the building, injuring a custodian. North Las Vegas Police spokesman Eric Leavitt says the 50-year-old woman was ejected from the Cannery casino Friday morning and drove her Winnebago motorhome into the building. Leavitt says the woman hit a 66-year-old custodial worker who was outside the building. The Las Vegas Review-Journal reports the worker was critically injured but is expected to survive. Leavitt told KVVU-TV that the woman kept hitting the gas and her vehicle was stuck in the building's entrance. Employees had to remove the woman to get her to stop. Leavitt says police who were already at the casino arrested the woman. Her identity was not immediately released. (https://bit.ly/2PjDsM2)

A McDonald’s customer was hit in the face with a blender thrown by an employee after she went into the Ohio store to complain about an incorrect order. Britany Price went through the fast-food chain’s drive-thru in Colerain Township on Sept 22nd. However, when she received her order – cheeseburgers and Happy Meals – it was incorrect. According to surveillance footage, Price is seen going into the store for assistance and waiting nearly twenty-five minutes to be helped. Eventually, Price goes to her car to get the food and demand a refund. The situation escalated when Price came back into the store with the food, which she began throwing at the manager. The manager retaliated and threw a blender from behind the counter. The blender struck Price’s face and knocked her to the ground. In the footage, Price is seen struggling to get up after the blow. Price is now filing a civil lawsuit against McDonald’s for the assault, which she said is forcing her to undergo surgery to repair the shattered cheekbone and broken nose she suffered. In a statement to Fox News, the McDonald’s location's management confirmed the employee has been fired. (https://fxn.ws/2MT4E2x)

FAKE NEWS.... OR FLORIDA?!
I read a headline and Heidi (and you) need to guess if the story is FAKE NEWS or something that really happened in the state of FLORIDA.
A Dade County Prosecutor got a DUI three hours after winning a DUI conviction against a suspect ….. FAKE NEWS