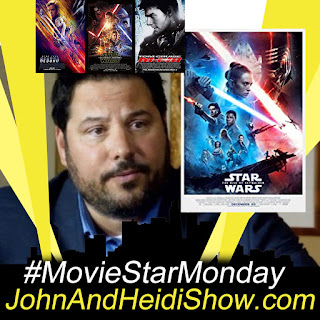 It's a #MovieStarMonday! We talk to Greg Grunberg (Heroes, Alias, Star Trek, Star Wars, Castle Rock) about his TV & Film projects and something that I near and dear to him... Epilepsy Awareness Month (NOVEMBER) He created talkaboutit.org, a website to raise awareness for epilepsy and featuring several celebrity videos, and organizes frequent benefits and fund-raisers.


A survey published in Lancet Psychology found that there is zero proof that smoking marijuana improves your mental health. (https://yhoo.it/2qUZ1sa)

Some guys hunt with the idea of mounting a twelve-point buck on their wall. Or maybe a nice largemouth bass trophy. One underage drinker on Homecoming eve in Iowa City, however, had a porcelain prize in mind. 20-year-old Nolan C. Nagle was arrested shortly after 1:30 a.m. on October 19th after police say he was underage in a bar and stole the top half of a toilet seat from “Sports Column Bar” in downtown Iowa City. Police spotted Nagle walking in the pedestrian mall with a “large object” under his shirt at 1:37 a.m. “As I approached the defendant, he removed the item, the top half of a toilet seat, and dropped it on the ground in the doorway to The Graduate Hotel while continuing to walk away,” reads the report. Police stopped Nagle, who the report says had bloodshot eyes, smelled of ingested alcohol and admitted to recently leaving Sports Column. He told the officer that he broke the toilet seat off at the bar and he wanted to hang it on his wall. He was charged with littering in a public place, being under the legal age in a bar, fifth-degree criminal mischief, fifth-degree theft, possession of a fictitious license, and public intoxication.
(https://bit.ly/33YvcFd)

”Game of Thrones" creators David Benioff and D.B. Weiss just backed out of their deal to make a new “Star Wars” trilogy. (https://bit.ly/2NsoNvs)

The man who bought Demi Moore’s New York Penthouse has put it back on the market for $50 million. (https://bit.ly/2q4EtwR)
SCOOP OF THE DAY: Brought to you by SingleStudentLoan.com
Tiger Woods’ win LAST Sunday was the 82nd tournament victory of his career and has some golf experts predicting he’ll catch Jack Nicklaus’ record of eighteen Majors. Tiger just won $2 million bucks.(https://bit.ly/2opPWGV)

A new report claims that Kanye West will never perform his past songs in their original form again and is now purely a gospel artist. (https://pge.sx/2phwjRL)

Prince’s posthumous autobiography, which the singer began working on before his death, is hitting shelves this week. (https://bit.ly/2MSdu0q)


Denver was hit with back to back snowstorms that have blanketed the city in twelve inches of snow. (https://cbsloc.al/2Nus8tO)

FUN FACT FOR YOU:
Share this with your friends... they'll think you're really smart!
95% of people text things they could never say in person. Are you guilty of this? I know I am.


WEIRD NEWS: Brought to you by WeirdGiftOfTheDay.com
The 19-year-old man who stole a ring-tailed lemur from a Southern California zoo was sentenced to three months in federal prison on Monday. Aquinas Kasbar, of Newport Beach, pleaded guilty in July to taking the endangered primate, named Isaac, from the Santa Ana Zoo in July 2018. The teen admitted he broke into the zoo and used a bolt cutter to create an opening in the 32-year-old lemur’s enclosure. He placed the animal — the oldest captive ring-tailed lemur in North America — in a plastic container without ventilation and abandoned it at a Newport Beach Hotel. Attached to the container was a note that read: “This belongs to the Santa Ana Zoo it was taken last night please bring it to police.” Isaac was eventually returned to the zoo unharmed. Kasbar was also ordered to pay more than $8,000 in restitution to the Santa Ana Zoo.
(https://bit.ly/2WnQhGq)


A Texas man suffered a massive heart attack and wound up in the hospital when he was just 26-years-old - and his doctors blame the young man's habit of guzzling eight to ten energy drinks a day. The 26-year-old went to the emergency room at Texas Tech University Health Sciences Center at El Paso with chest and left arm pain that had lasted nine hours. All of the patient's vital signs seemed normal, but then doctors found a completely blocked artery leading from his heart. The man revealed he typically drank eight to ten cans - about four liters - of energy drinks every day and that his chest pain came on shortly after. Doctors performed a cardiac catheterization, which involves inserting a thin tube is inserted into the groin, neck or arm and threading it to the heart's vessels to diagnose cardiac conditions. The procedure revealed a complete blockage of one of his left arteries as well as other “mild irregularities.” The patient had a stent, or a tube, placed into his blocked artery to improve blood flow. After two days, he was released and told not to consume any more energy drinks.(https://dailym.ai/36mHARA)
FAKE NEWS.... OR FLORIDA?!
I read a headline and Heidi (and you) need to guess if the story is FAKE NEWS or something that really happened in the state of FLORIDA.
A Tallahassee dog walker lost his license after two Yellow Labs tested positive for marijuana ….. FAKE NEWS