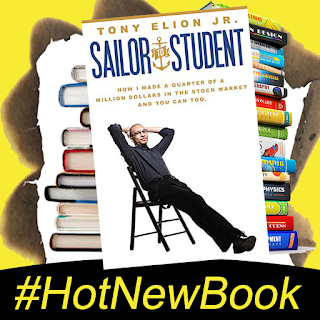 Tony Elion Jr. is a US veteran and self-taught investor who, during his time in law school, made hundreds of thousands of dollars in the stock market using seed money from the GI Bill. He holds four degrees, most recently an MFA from Middle Tennessee State University and an expected Juris Doctorate from Penn State Law. His new book is called Sailor to Student: How I Made a Quarter of A Million Dollars in the Stock Market and You Can Too
https://amzn.to/2XPAp0r

A Census Poll found that San Francisco, California and Washington, D.C. have the most same sex couples. (https://bit.ly/2XM9tyC)

The baby, Argentine cops say, weighed about four kilos. A woman who appeared to be pregnant was actually wearing a handmade baby bump containing about nine pounds of marijuana, according to police who arrested the phony mom-to-be and a male companion on drug smuggling charges. The couple were passengers on a bus traveling hundreds of miles between two Argetine provinces, according to law enforcement officials. During a stop at a police checkpoint, cops discovered that the woman was not with child, but rather 15 packages containing pot. The drug stash was encapsulated inside a false belly constructed out of glue. In announcing the pair’s arrest yesterday, Argentina’s security minister crowed that the “Narco Pregnancy” had been aborted by police. While ambitious, the Argentine duo was not nearly as audacious as the Colombian smuggler who flew into Spain from Bogota in July with half-a-kilo of cocaine under his toupee. (https://bit.ly/35etRef)

SCOOP OF THE DAY: Brought to you by SingleStudentLoan.com
Edible Arrangements is now selling products infused with hemp-derived CBD.
(https://bit.ly/2OjtAkj)

An Illinois man who was busted for DUI says he only smelled like alcohol because he’d been kissing his girlfriend and she’d been drinking heavily.
(https://bit.ly/2Onvf8N)

A video of a train hitting a car in New Jersey has gone viral. The good news is the driver is okay. (https://fxn.ws/33ik1Xj)

Uber has lost its license to operate in London because it failed to ensure passenger safety. Uber is calling this an attack on their right to do business.
(https://bit.ly/2QPzQlJ)

A Mexican Church is upset with a sculptor who made a Giant Statue of the Baby Jesus that looks just like Phil Collins. (https://cnn.it/33d9Tz2)

FUN FACT FOR YOU:
Share this with your friends... they'll think you're really smart!
In the popular sitcom, Parks and Recreation, the writers had no idea Nick Offerman was a talented saxophone player when they wrote the Duke Silver plot line. Nick Offerman has played the saxophone his whole life, so when the writer wrote about his character being a secret jazz musician, the coincidence was perfect.


NEWS HEADLINES.... FROM SOMEWHERE IN THIS WORLD!
Dateline.... London
A London Handyman is being accused of hiding stolen paintings by Pablo Picasso in his garage. (https://bit.ly/2pOVrzw)


WEIRD NEWS: Brought to you by WeirdGiftOfTheDay.com
A Florida woman was busted for allegedly swiping more than $110,000 worth of luxury watches from men she met at clubs — including one tourist from New York robbed of his $56,000 timepiece. 25-year-old Katelin Wojtowicz was charged last Wednesday with grand theft in connection with three different cases, where she allegedly took dates back to their hotel rooms after a night of partying, waited until they dozed off, and then took off with their watches, cash, and other goods. The blond vixen met the first alleged victim at the Mokai Lounge in Miami Beach in May 2018 and, after a couple drinks, went back to his room at the Fontainebleau Hotel. When the guy woke up, Wojtowicz was gone — and so were his $12,000 watch, $12,000 in cash, $800 Apple iPhone 7, and $600 Gucci belt. She pleaded not guilty and the case is ongoing.
(https://bit.ly/2rntNKn)

A 20-year-old Florida man who was arrested last Friday after attempting to race a police officer on a highway told authorities that he was “just trying to go fast.” Connor Michael Proleika, of Tampa, was detained by a Clearwater Police officer shortly after 2:00 a.m. on November 22nd and is facing a charge of racing on highways. The suspect violated his probation linked to charges in Hillsborough County. Proleika told authorities he had not been aware the other driver was a police officer. The incident took place on Courtney Campbell Causeway, which is a 9.5 mile stretch of road that runs between Tampa and Clearwater. The arrest report said: “Proleika” was observed driving eastbound on the Courtney Campbell Causeway trying to bait this officer to race him. The defendant then revved his engine and took off, reaching speeds of 124 miles per hour with wanton disregard for other motorists.” (https://bit.ly/2DbzKNg)

A Broward County man brought a tiger into a grocery store and later told police it was his therapy animal ….. FAKE NEWS