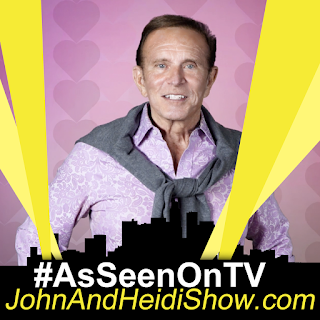 Today we talk to Bob Eubanks, best known as the beloved host of The Newlywed Game(1966-1974, 1976-1981, 1985-1992, and one show in 2001)
In total he hosted 11 different game shows for all three of the major networks, plus syndication. The Newlywed Game and Card Sharks were the two most popular. TV Guide named him one of the Top Five Game Show Hosts of All Time.
We'll talk to him about his latest venture... something that a friend invented FOR BOB... the 60up Balance Board. …a unique design created to help older folks retain, or regain, balance and mobility. www.60up.com

According to a new study, ice baths are not effective at repairing or building muscle. (https://bit.ly/35UXPE8)

For years, University of Miami professor and author Bruce Bagley served as a go-to quote for reporters writing about crime in the Americas. He spoke authoritatively on violent Mexican drug cartels, guerrilla politics in Colombia, and violence in Haiti. But Bagley, the feds say, parlayed his mastery of Latin American crime into a secret side job — laundering at least $3 million in dirty Venezuelan money through his own U.S. bank accounts and keeping about $300,000 as a fee for himself. An FBI investigation culminated Monday when South Florida agents arrested the 73-year-old Bagley, shocking the University of Miami and fellow academics across Latin America. Federal prosecutors in New York City announced a grand jury had indicted him on charges of money laundering and conspiracy after he “opened bank accounts for the express purpose of laundering money for corrupt foreign nationals.” Bagley made his first court appearance on Monday, and was ordered to pay a $300,000 bond before being released from a detention center.(https://hrld.us/35ikiLf)

Lori Loughlin's daughter, Olivia Jade, has returned to YouTube after an absence of nearly nine months.(https://cnn.it/2DGhoUX)

In this month’s issue of Vogue, Taylor Swift discusses her role in the film adaptation of the Broadway play “CATS.” (https://pge.sx/2rPx19S)

SCOOP OF THE DAY: Brought to you by SingleStudentLoan.com
A video of a fistfight outside of a FOREVER 21 store in Pennsylvania has gone viral. (https://bit.ly/2DJMs6c)

The NYPD is looking for a couple who were seen having sex on the subway Monday afternoon. (https://bit.ly/2qgc2MP)

Lil Bub, the famous internet dwarf cat with the smooshed face, has died at the age of eight. (https://bit.ly/2Rc5pX4)

The tracksuit Rihanna wore to JFK airport over the weekend will cost you $10,000. (https://pge.sx/2YeTzwA)

FUN FACT FOR YOU:
Share this with your friends... they'll think you're really smart!
The 20th of March is Snowman Burning Day. This strange holiday was spawned by American and Swiss citizens to symbolize the end of the winter season.


NEWS HEADLINES.... FROM SOMEWHERE IN THIS WORLD!
Dateline.... Australia
A video of two Australian Thieves who hit an ATM with their truck in an attempt to break it open and steal the cash has gone viral. They’re now facing five years in prison. (https://fxn.ws/2OJ77NY)


WEIRD NEWS: Brought to you by WeirdGiftOfTheDay.com
A 70-year-old Oklahoma man has been sentenced to fifteen days in an Arizona jail for concealing the dead body of his wife in his vehicle. Rodney Puckett also was sentenced in Pinal County Superior Court to three years of supervised probation. Puckett, of Sand Springs, was arrested May 13th after an Eloy restaurant worker reported seeing a car going through the drive-thru with a naked body in the front seat. Police say Puckett told them he was traveling from Oklahoma to California and his 74-year-old wife died during an overnight stay at an El Paso, Texas hotel. The Casa Grande Dispatch reports the county medical examiner determined Linda Puckett died from heart disease. The Sand Springs Police Department issued a Silver Alert at the end of April before discovering he was being held in Arizona. (https://bit.ly/2rbKhp7)

It turns out, high chairs are only meant for babies and toddlers, not teenagers. Firefighters were called to a Chick-fil-A in Idaho when a teenager got stuck in a high chair. She had apparently been dared by her friends to sit in the small seat. The 15-year-old girl found out the hard way that while she still fits in the high chair, getting out was a problem. The incident occurred last Tuesday around 9:30 p.m. The teen girl was visiting the fast-food place in Ammon with her friends after attending a local high school basketball game. Ammon Battalion Chief Jesse Williams told East Idaho News, “They ate their meal and then dared one of the young ladies to see whether or not she could fit in a high chair. She accepted the dare and was able to get in the chair but couldn’t get back out.” The young girl’s friends and restaurant workers attempted to help her out of the chair for 45 minutes before calling authorities. Fire crews were able to free the girl around 11 p.m. They initially believed that they would have to use a chainsaw to free her, but were instead able to disassemble the chair themselves. (https://fxn.ws/2P6Gp0Q)

A St. Petersburg man was arrested after police found a bag of methamphetamines stashed inside his belly button.
FLORIDA (https://bit.ly/2Ds1Jsh)