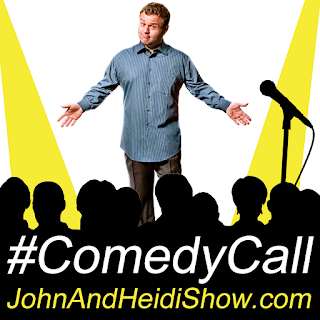 Today we have a #ComedyCall with Frank Caliendo. Very funny comedian who can do a BUNCH of very good impressions. His website with tour info & links to his social media at FrankCaliendo.com

TODAY IS A SPECIAL DAY! (A special thank you to NationalDayCalendar.com)
December 11
National App Day
National Noodle Ring Day
SURVEYS, STUDIES & SUCH: Brought to you by BetterCreditCards.com

A new study found that birth control pills are shrinking a part of women’s brains. (https://bit.ly/36dXgWd)

BIG SCREEN-LITTLE SCREEN: Brought to you by ChannelSurferTV.com
Have you heard the latest rumor of a Friends reunion? For weeks there’s been talk of an HBO Max special that would be unscripted and include all six cast members. HBO Max will debut in May and any sort of Friends reunion would certainly generate a ton of new subscriptions... but in a recent People interview, Aniston claimed she knows nothing about the reunion.

“Real Housewives of Atlanta” star Porsha Williams is reportedly working on having another baby. (https://pge.sx/2Po929P)

SCOOP OF THE DAY: Brought to you by SingleStudentLoan.com Walmart has apologized for selling a sweater that features Santa with cocaine.
(https://bit.ly/2RAQ9TV)

A survey by Moonstruck Chocolate found that the average American spends over $30,000 on snacks in their lifetime. (https://bit.ly/350ZmbT)

A Maine man was arrested for creating a meth lab inside of a children’s playroom at a church. (https://bit.ly/2P4wbz1)

Georgia police are looking for a jogger who slapped a Female Reporter’s rear end on live TV Saturday. (https://bit.ly/38j847o)

A European company has launched a new video game called “I Am Jesus Christ” that allows gamers to play through key moments in the bible.
(https://bit.ly/38oPZEP)

Three guys drove across the U.S. a record time of 27 hours, 25 minutes.

FUN FACT FOR YOU:
Share this with your friends... they'll think you're really smart!
Vincent van Gogh only sold one painting in his lifetime. Just a few months before his death, Van Gogh sold his painting “The Red Vineyard.” It was sold in Brussels, Belgium for 400 francs.

WEIRD NEWS: Brought to you by WeirdGiftOfTheDay.com
Every now and again incredible stories emerge of heroic dogs saving their owners from house fires. This isn't one of those stories. According to fire services in England, a husky has become the unlikely cause of a house fire after turning on a microwave with food inside it. The fire began on Monday afternoon at a home in Stanford-Le-Hope, around twenty-five miles east of London, when a dog inadvertently switched on the kitchen appliance, which had a packet of bread rolls inside. The owner, who was out of the property at the time, saw smoke coming from the kitchen through a camera feed on his mobile phone. Geoff Wheal, watch manager at Corringham Fire Station, warned that the "very strange incident" could have been “more serious.” He said that he and his colleagues arrived to find the kitchen full of smoke. Wheal warned against storing food in the microwave when the machine is not in use. Luckily, the dog was not hurt in the incident. (https://cnn.it/2sL4JxP)

A Michigan man accidentally shot his own brother after mistaking him for a deer on a hunting trip. Deputies from the Ionia County Sheriff's Office responded to a call of an accidental shooting early Saturday evening in a field in Boston Township, Michigan. Upon arrival, they determined that a man, 29, had shot his brother, 28, while the two were hunting together. An investigation at the scene concluded that the shooting was “by all accounts” accidental. Authorities say the men had been looking for a deer that one of them had shot earlier. After failing to locate the deer, they became separated in dense cornstalks in the field. The shooter was “some distance away” from his brother when he thought he saw the deer moving and making noise. He fired a shot and quickly realized he had shot his brother. The shooter immediately called 9-1-1, and he and his brother walked out of the field to meet medical first responders. Given the extent of his injuries, the victim was airlifted via helicopter to a hospital. He was in "serious but stable condition" at the time of transport. (https://nbcnews.to/2LkRx9k)

FAKE NEWS.... OR FLORIDA?!
I read a headline and Heidi (and you) need to guess if the story is FAKE NEWS or something that really happened in the state of FLORIDA.
A Fort Myers man was charged with indecent exposure after getting naked during a picture with a mall Santa ….. FAKE NEWS