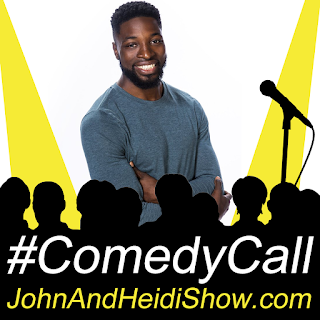 Today we have a #ComedyCall with Preacher Lawson, best known for his appearance on season 12 of NBC’s hit series, AMERICA’S GOT TALENT (2017) where he made it to the final rounds. Based off his stellar performance in season 12 Preacher was invited to compete on AMERICA'S GOT TALENT: THE CHAMPIONS (2019) and BRITAN’S GOT TALENT: THE CHAMPIONS (2019) where he advanced to the finale after he received the most votes from the fans. Preacher was the host of the Facebook Watch series WORLD’S MOST AMAZING DOGS (2019) with George Lopez and Lisa Vanderpump and hosts his own vegan cooking show on YouTube COOKING WITH A COMEDIAN. Preacher just shot his first stand-up special which will premiere on BET + and continues to perform at sold-out venues around the country.
BET+ https://www.bet.com/betplus.html

According to a new survey, 20% of Americans say that spending the holidays at home is always a letdown. (https://bit.ly/2RdqqQY)

An Alaska man found with $400,000 in illegal drugs hidden in spoiled goat intestines at an airport has been arrested. Authorities say that Cenen Placencia of Kodiak was arrested Wednesday at Anchorage’s international airport. Investigators with Alaska State Troopers searched a large fish box the 71-year-old man had checked as luggage, according to an affidavit filed with the charges. Placencia gave his consent to search. Inside the box was loosely wrapped frozen meat, with multiple small pieces of meat frozen together, according to the affidavit which says Placencia consented to the meat being thawed for further investigation. Investigators smelled the odor of rotting meat as it thawed, and a police dog detected the presence of drugs. Investigators found packages wrapped in plastic that contained about 740 grams of heroin and 389 grams of methamphetamine. Placencia was arraigned last Friday on a charge of possession with intent to distribute controlled substances. (https://bit.ly/34m22Ap)

Director Martin Scorsese is advising moviegoers NOT to watch his new film, “THE IRISHMAN,” on their cell phones. The Irishman is THREE HOURS AND FORTY FIVE MINUTES LONG. (https://bit.ly/35WUtkd)

SCOOP OF THE DAY: Brought to you by SingleStudentLoan.com
Montana Governor Steve Bullock announced that he was dropping out of the 2020 presidential race. (https://abcn.ws/2DCsVV5)

The Christmas Tree Lighting Ceremony in Boise, Idaho was delayed after the tree fell over. (https://bit.ly/2rMf5gb)

Indiana Police are looking for a man with the words “Crime Pays” tattooed across his forehead. (https://fxn.ws/2Yb0fMc)

Amazon is under fire for selling Christmas Decorations in Europe that include the Auschwitz Concentration Camp. (https://bit.ly/35YBcz0)

A Rolex watch worn by Marlon Brando is expected to go for $1 million or more when it goes up for auction later this month. The irony is that this is the watch he wore during the making of “Apocalypse Now,” the film where he famously showed up three hours late every day. They’re also selling a Rolex that belonged to Jack Nicklaus. He was the golfer known as the GOLDEN BEAR.
(https://fxn.ws/33KlFRE)

Dateline.... SwedenScientists at the University of Stockholm say they’ve found a perfectly preserved puppy that was frozen in ice for 18,000 years. (https://bit.ly/2rPfkqI)


WEIRD NEWS: Brought to you by WeirdGiftOfTheDay.com
As ridiculous as it might sound, a blonde woman in Germany walked straight into a PlayStation store and urinated on their gaming consoles. The video was posted on Reddit and the woman seems to be enjoying and laughing out loud while her friend is also heard laughing while filming the entire clip. The incident occurred at MediaMarkt, which is a major German electronics retailer. In the viral clip, which is doing the rounds on social media, the blonde woman is seen dressed up in a grey skirt with stockings and black jacket, while she approaches a PlayStation 4 display where the latest FIFA game is set up. The woman looks around to see if anyone is watching and then squats in front of the controllers and pulls down her stockings to urinate all over the PlayStation gaming consoles while the cameraman moves around her trying to capture it from all angles. Reddit users were disgusted with the video and slammed the woman and the cameraman for doing such a shameful thing in public causing inconvenience to the staff members and shoppers. (https://bit.ly/2OBlgwD)

A Florida woman faked a medical emergency in order to get a larger seat on an American Airlines flight. But the pilot, apparently not realizing the emergency was bogus, turned the plane around. The woman, who wasn’t publicly identified, was taken into custody when Miami-bound flight American Eagle 3508 landed back in Pensacola around 6:30 a.m. Friday. Pensacola Police Department spokesman Mike Wood said, “The pilot declared an emergency… once they got on the ground, she made it clear that she was faking the medical condition to get a bigger seat.” Once the plane was back on the ground, the woman continued with the theatrics, refusing to get off the aircraft. The pilot, law enforcement, and medical personnel eventually succeeded in getting her off the plane. The woman was taken into custody under the Sunshine State’s Baker Act, which allows authorities to hold a person who could be a threat to themselves or others. (https://bit.ly/2OYcesk)

A Sarasota babysitter was charged with drug possession after smoking so much marijuana a family’s Golden Retriever had to be treated for smoke inhalation ….. FAKE NEWS