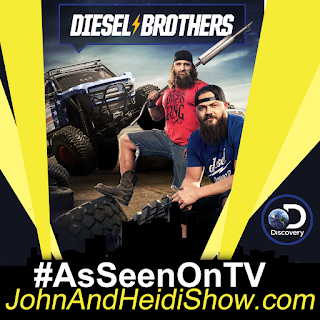 Today we visit with the Diesel Brothers... Heavy D and Diesel Dave to visit about the brand-new season of DIESEL BROTHERS. (returns Monday, December 9 at 8pm ET/PT on Discovery Channel) Mondays will be Trucking Huge as DIESEL BROTHERS leads into an all new season of DIRTY MUDDER TRUCKERS, airing Monday, December 9 at 9pm ET/PT. In addition to watching the series on Discovery, viewers can check out new episodes each week by downloading the Discovery GO app. Viewers can join the conversation on social media by using the hashtag #DieselBrothers and follow Diesel Brothers on Facebook, Instagram, and Twitter for the latest updates.
https://www.discovery.com/shows/diesel-brothers

According to a new study, 90% of makeup products contain potentially life threatening superbugs like E.coli. (https://bit.ly/2sGLYLG)

A Delta flight attendant from Brooklyn has been accused of being almost seven times over the alcohol limit while on duty at London’s Heathrow Airport. 27-year-old Lemara Thompson allegedly had 135 milligrams of alcohol per 100 milliliters of blood in her body at the major transportation hub on June 16th. She was charged with performing an aviation function with a blood-alcohol level over the prescribed limit, which is 20 milligrams for people performing duties relating to an airliner, according to Civil Aviation Authority rules and the Railways and Transport Safety Act. Thompson, who lives on Ocean Avenue in Brooklyn, did not appear at Uxbridge Magistrates’ Court for a hearing Wednesday but responded to the court via mail. Chair Magistrate Alison White adjourned the case for two weeks to give Thompson notice to travel to the British court or to set up a video link. She is expected to appear in court on December 4th.(https://bit.ly/2O64dT6)

Dewayne Walker, a black former CNN Employee, is suing his old boss Whit Friese, who is white, for threatening him by saying “If you F- with my money I will kill you.” (https://bit.ly/365NJjZ)

SCOOP OF THE DAY: Brought to you by SingleStudentLoan.com An Arizona man was arrested for stealing someone’s burrito and eating it. The judge set bail at $500. (https://bit.ly/2PihSWp)

A Florida man was arrested for living off his dead mother’s Social Security for the past fifteen years. (https://bit.ly/34TzOgR)

Ohio police are searching for a convicted sex offender who has a marijuana leaf tattooed on his head. (https://bit.ly/2OQ7TIW)

A 71-year-old Japanese man was arrested for calling the phone company 24,000 times to complain. (https://fxn.ws/33VOISm)

The internet continues to mock Kim Jong-un’s propaganda photos that show him on a White Horse. (https://nyti.ms/368Xw8O)

Apple is paying $25 million for a documentary about Billie Eilish. Billie made headlines earlier in the week when she said in an interview she’d never heard of Van Halen. (https://bit.ly/2RrmfRN)

Kanye West and Joel Osteen are going to hold a joint service at Yankees Stadium in 2020. (https://bit.ly/2OTsU5K)

NEWS HEADLINES.... FROM SOMEWHERE IN THIS WORLD!
Dateline.... EnglandThis story from the United Kingdom doesn’t sound real but it’s true. A nymphomaniac duck was forced to have its, quote, “traumatized penis” removed after engaging in too much sex. (https://bit.ly/33S8YUT)

WEIRD NEWS: Brought to you by WeirdGiftOfTheDay.com
Kansas man was driving a stolen car en route to post bail for his older brother, who himself was driving a stolen car when arrested earlier that day. The McCracken brothers--36-year-old Eric and 32-year-old Keith--are behind bars in the Johnson County jail on assorted charges, including possession of stolen property, a felony. The Topeka residents are being held in lieu of $7,500 bond (Keith) and $5,000 bond (Eric). According to cops, Keith was busted on November 29th for driving with a suspended license. Investigators subsequently determined that the 2007 Chevy Trailblazer Keith was driving was stolen. Eric, behind the wheel of a hot 2015 Chevy Silverado, was nabbed that same day following a vehicle pursuit by a Holton Police Department officer. Holton is the county seat of Jackson County and home to the local jail. The younger McCracken was reportedly en route to post bail for his sibling.
(https://bit.ly/2ORaAKv)

The Week of the Forehead Tattoo continues with Ohio police asking for the public’s help in the arrest of a 51-year-old ex-con. The Washington County Sheriff’s Office announced they are seeking to apprehend Douglas Perry Christopher on a warrant charging him with failing to provide law enforcement officials with his current address. Christopher is hard to miss considering the “Pot Head” tattoo on his forehead. Christopher was convicted on a felony narcotics possession charge for which he served more than two years in state prison. He was released on parole this summer. Christopher’s crazy pot head tattoo can be seen in an Ohio Department of Rehabilitation & Correction mug shot. An earlier booking photo--which was released by sheriff’s investigators--shows the pot leaf on Christopher’s forehead before it was filled in with green. Christopher’s last known address was in Belpre, a city along the Ohio River across from Parkersburg, West Virginia. Recently, cops also arrested a wanted Indiana man who has “CRIME PAYS” tattooed on his forehead. (https://bit.ly/2RrpAR3)
FAKE NEWS.... OR FLORIDA?!
I read a headline and Heidi (and you) need to guess if the story is FAKE NEWS or something that really happened in the state of FLORIDA.

A Cape Coral man was found sitting on the roof of a family’s home in his underwear and told police he had no idea how he got there.
FLORIDA (https://bit.ly/33ftFdj)