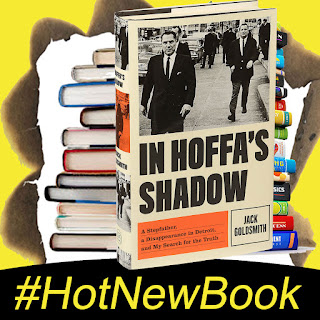 Today we talk with Jack Goldsmith, the author of a new book “In Hoffa's Shadow: A Stepfather, a Disappearance in Detroit, and My Search for the Truth” AVAILBLE NOW - https://amzn.to/36H1jL0

A study by the University of Japan found that having a plant on your office desk will reduce stress. (https://bit.ly/2FjyOHJ)

An argument “over a Kelly Clarkson TV show” turned violent Monday afternoon when a Florida Couple allegedly exchanged punches, according to police who busted the duo for domestic battery. According to arrest affidavits, 61-year-old Linda Donahower and 55-year-old Ronald Meyer were in their Clearwater residence late Monday afternoon when they “engaged in a verbal argument” about the Clarkson show. Clarkson, who won the first season of “American Idol” in 2002, hosts “The Kelly Clarkson Show,” a weekday talk show on NBC. The 37-year-old singer’s hour-long program debuted in September. Investigators charge that the quarrel between Donahower and Meyer turned physical when an annoyed Donahower punched Meyer “in the shoulder to get him to be quiet.” Meyer allegedly responded by jumping on Donahower and striking her in the face. Cops report that the couple have been in a “romantic relationship for approximately 14 years,” and that they were both “intoxicated causing inconsistencies in their statements.” Donahower and Meyer were both “taken into custody for a mutual battery.” (https://bit.ly/2QGQ9Q7)

Star Wars: The Rise of Skywalker continues to hold tight to the No. 1 slot at the box office as it took in $33.7 million in its third weekend, giving it a domestic total of $450.7 million and a worldwide total of $918.7 million.

Ricky Gervais vowed that Sunday night’s Golden Globes would be his final time hosting the show. Ricky’s jokes raised a lot of eyebrows with the viewers at home. (https://yhoo.it/2Fm3x6T)

SCOOP OF THE DAY: Brought to you by FunkyMonkeyShirts.com
San Diego has passed a new law that bans marijuana dispensaries from opening within 1,000 feet of a Church. (https://bit.ly/36s56fy)


A Wisconsin school teacher admitted to repeatedly pooping in a local park and has agreed to pay $5,700 in damages. (https://bit.ly/39L2Nq6)


Shania Twain admits she struggles with stage fright from time to time, to the point she questions whether she can even perform. But once she works through a threshold and can be with the fans, she overcomes the challenge.

Samuel L. Jackson requested to have a purple lightsaber in Star Wars in order for him to accept the part as Mace Windu. Jackson wanted to be able to find himself on screen in big fight scenes, so he managed to get George Lucas to approve his request.


NEWS HEADLINES.... FROM SOMEWHERE IN THIS WORLD!
Dateline.... Dubai
Soccer Star Cristiano Ronaldo was seen wearing a $500,000 watch in Dubai on Saturday. (https://pge.sx/2SUsvlL)

WEIRD NEWS: Brought to you by WeirdGiftOfTheDay.com
A carjacking suspect is in jail after he allegedly drove a stolen truck, its owner and a goat more than 130 miles from Missouri to Oklahoma. State troopers say 40-year-old Brandon Kirby was arrested Wednesday in Sand Springs, Oklahoma, after a slow car chase in a stolen truck. He is charged with kidnapping and being a felony in possession of a firearm, according to the Creek County Sheriff’s Office. The truck’s owner says he was asleep when Kirby allegedly took the vehicle at an adult video store in Carthage, Missouri. There was also a goat in the truck at the time. Police say the carjacker drove all the way to Tulsa, Oklahoma, more than 130 miles away, before kicking the victim and goat out of the truck. The truck owner called 911 then OnStar to report the vehicle stolen. The security company was able to remotely slow down the truck to 15 miles per hour. Officers pursed the truck at low speeds and used stop sticks to end the chase. Kirby was then taken into custody. https://www.wvlt.tv/content/news/Sleeping-man-goat-carjacked-driven-130-miles-before-suspect-arrested-566645061.html

A man dressed up in a sheriff’s costume and drove to a contractor’s house in Florida to try to intimidate him. 51-year-old Todd Gieger of New Jersey is accused of driving a Maserati with New Jersey tags to the victim's home to play sheriff. Authorities arrested Gieger on Wednesday after being alerted in November to the incident. Gieger was in a dispute with the contractor over a lien against Gieger's home, under construction in Sarasota, due to lack of payment. Accoridng to the report, “Gieger wore a black bullet proof vest and law enforcement style badge while claiming to be the sheriff. Through continued investigation, detectives determined Gieger called multiple other sub-contractors involved in the lien as well as the construction company, while claiming to be a member of law enforcement.” Gieger's home was being built near the water along Benjamin Franklin Drive on St. Armands Key, an island in Sarasota Bay. He was charged with two counts of false impersonation of law enforcement and was released on $3,000 bond. (https://bit.ly/2MX1Pgw)
FAKE NEWS.... OR FLORIDA?!
I read a headline and Heidi (and you) need to guess if the story is FAKE NEWS or something that really happened in the state of FLORIDA.

A Florida man woke up to find an intruder sucking on his toes.
FLORIDA -(https://bit.ly/35pNTSw)