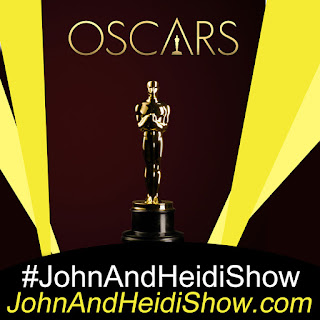 Our guest on Wednesday is Ryan Jay, one of America's most popular, nationally syndicated, radio film critics. He can be heard live Friday mornings on radio stations across the country, in addition to recorded weekly movie review segments for Premiere Networks. He is also featured weekly as resident film critic on TV programs. Ryan is a member of the Broadcast Film Critics Association. He can be found in the pages of Us Weekly magazine as Fashion Police. And he's an OZ historian. https://ryanjayreviews.com/

SURVEYS, STUDIES & SUCH: Brought to you by BetterCreditCards.com
A study by Tufts University found that fireflies are going extinct due to the growing use of pesticides and artificial lights. (https://bit.ly/31vbj8O)

THIS IS YOUR BRAIN ON DRUGS: Brought to you by TimeForRehab.com!
Each day we share stories about people doing dumb things under the influence, but ADDICTION IS NO LAUGHING MATTER! If you or someone you know needs help, we're here! Learn more at TimeForRehab.com.
A Michigan State University student named Jack DeBrabander was arrested early Saturday morning on two battery counts after allegedly urinating off the balcony of a Florida bar and striking two women below “in the face, mouth, head, hands, and arms.” Cops say that the 20-year-old DeBrabander was intoxicated when he “stepped to the railing” of a balcony above the Yard of Ale bar in St. Petersburg around 12:25 a.m. He then “removed his penis from his pants, and proceeded to urinate on” the two victims, who were seated downstairs on a sidewalk bench. Each of the women, criminal complaints state, was “struck in the face, mouth, head, hands, and arms” with DeBrabander's urine when they looked up to see what was hitting them. Court filings do not indicate whether either victim needed medical attention. Cops noted that DeBrabander was “found to be intoxicated and was uncooperative with questioning.” He was booked into the county jail on the misdemeanor raps, and was subsequently freed from custody after posting $1,000 bond. (https://bit.ly/36Uf20y)

BIG SCREEN-LITTLE SCREEN: Brought to you by ChannelSurferTV.com
Disney has acquired the film rights to the Broadway play “Hamilton” for $75 million dollars. (https://bit.ly/3blhvF0)

Dog The Bounty Hunter’s girlfriend Moon Angell shot down rumors that they’re getting married, saying she only likes him as a friend.(https://pge.sx/2v0RsSS)

Disgraced Investment Banker Bernie Madoff has asked for an early prison release because he claims he only has eighteen months to live. (https://cnb.cx/2OxibgL)

Gilbert Gottfried told reporters in New York that he sometimes doesn’t know where he is. (https://pge.sx/2vWiX0p)

One man has saved more than 200 people from suicide. It's a sad fact the Golden Gate Bridge in San Francisco is a site where many suicides take place. However, one California Highway Patrol officer has done more to combat this problem than any other individual. Officer Kevin Briggs, who battles depression himself, has personally talked more than 200 people down from the proverbial ledge throughout his career. After retiring in 2013, Briggs wrote a book called Guardian of the Golden Gate and now goes on speaking tours to encourage public discussion of suicide and mental illness.

A guy in China desperate to charge his phone ended up disrupting traffic after he plugged his mobile into a traffic light. Officers found the man had opened the light’s switch box and unplugged the controller in order to charge his phone.

A domestic argument turned repulsive Friday evening when a Florida Woman “smeared dog feces” in her fiancé’s face. Sheriff’s deputies responding to a disturbance call at a St. Petersburg home spoke to a man who said he had been “engaged in an argument” with his fiancé, 41-year-old Jane Marie Faulkner. During that confrontation, the man told cops, Faulkner “repeatedly” hit him and “smeared dog feces” in his face. Faulkner, who was intoxicated, reportedly “spontaneously admitted to deputies they did smear dog feces in the face of the victim.” Faulkner, cops added, “was unwilling to provide any more details of the argument.” Faulkner was arrested on a domestic battery charge after deputies judged her to be the “primary aggressor” during the 9:00 p.m. confrontation. She was released from the county jail late Saturday evening after posting $2,000 bond. A judge has ordered her to have no contact with the victim.(https://bit.ly/2Orahp0)
MOMENT OF DUH: Brought to you by SingleStudentLoan.com

Bruce McConville would rather burn his own money than give it to his ex-wife, and a disbelieving Superior Court judge is giving him thirty days in jail to rethink his claim. The 55-year-old Ottawa businessman and failed mayoral candidate sold properties and businesses behind her back, then withdrew the $1 million and, he claims, burned the money in two bonfires: $743,000 last Sept. 23rd, and $296,000 on Dec. 15th. McConville has long defied a court order to file an affidavit about his finances, notably where the money went from the secret sales. Because his financial affairs remain a mystery, the court has been unable to figure out what he owes in child and spousal support. As a result, he has been paying neither. McConville also defied a court order not to sell his properties because there was a fear that he was trying to keep the proceeds out of the court’s reach. McConville, in fact, sold some assets to his former accountant. The judge told court he didn’t think McConville set anything on fire, let alone $1-million in cash. (https://bit.ly/2GTxo7A)
FAKE NEWS.... OR FLORIDA?!
I read a headline and Heidi (and you) need to guess if the story is FAKE NEWS or something that really happened in the state of FLORIDA.

A Fort Pierce woman was arrested for drug possession and told police the wind blew cocaine into her purse ….. FLORIDA (https://bit.ly/2SFmSVz)
GOOD NEWS: Brought to you by BetterCreditCards.com