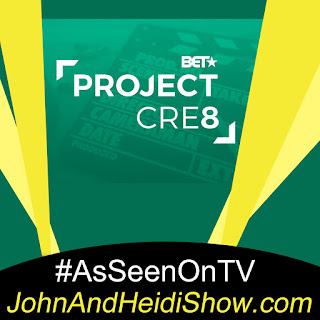 BET is on the lookout for the next undiscovered comedy writer in the new TV series PROJECT CRE8. BET and powerhouse writer/director/producer Tracy Oliver (The First Wives Club) are giving aspiring TV writers a chance to develop an original TV comedy for BET – and they’ll buy the script for $25,000.
https://www.bet.com/cre8/2020/contest.html

A Survey found that advertising budgets could take a $3 billion dollar hit.
(https://bit.ly/33qOqEy)

THIS IS YOUR BRAIN ON DRUGS: Brought to you by TimeForRehab.com!
Each day we share stories about people doing dumb things under the influence, but ADDICTION IS NO LAUGHING MATTER! If you or someone you know needs help, we're here! Learn more at TimeForRehab.com.
A Pennsylvania man charged with breaking into a neighbor’s house and attacking several residents claimed he invaded the property while chasing after a “demon dog” at Satan’s direction. And, yes, crystal meth appears to have played a central role in the bizarre March 1st home invasion in Luzerne Township. According to a probable cause affidavit, a woman told cops that 31-year-old Terry Murphy entered her home without permission around 2:00 p.m. Sunday. Murphy allegedly choked the woman and her teenage daughter while yelling “Praise God.” He was then chased from the residence by the woman’s husband. “At that time Murphy walked back to his house...while talking about his demons and that he was talking to Jesus,” a state trooper noted. During police questioning, Murphy continued to yell about Jesus and his demons, and disclosed his pursuit of the demon dog. After being handcuffed and placed in a patrol car, Murphy was transported to a local hospital due to “extreme intoxication from crystal meth.” (https://bit.ly/2vJI9am)

Oprah Winfrey is slamming online reports that she was arrested for sex trafficking.(https://on.today.com/392qU1R)

Tom Hanks posted online that he has “the blahs,” but he doesn’t have a fever as he remains isolated in Australia with his wife Rita Wilson.(https://pge.sx/3bbDaP3)

Stores around the country are reportedly selling out of toilet paper as people worried about quarantines due to the coronavirus outbreak attempt to stock up. One pizza place in Wisconsin saw the situation and decided to help out. ZaRonis in Oshkosh, Wisconsin, posted on its Facebook page that they not only had toilet paper, but were willing to sell it. Customers are able to order four rolls at the cost of $3.25.

“The National Enquirer” is being slammed for publishing Fake News stating that there is a cure for Coronavirus.(https://bit.ly/2vvz7xG)

Facebook apologized for a bug that’s prohibiting some users from seeing Coronavirus news.(https://bit.ly/2TZKx6a)

New York City is releasing prison inmates who may be vulnerable to Coronavirus. (https://bit.ly/2U3JK4j)

FUN FACT FOR YOU:Share this with your friends... they'll think you're really smart!
Sharks can live for five centuries. Greenland Sharks are known to be some of the oldest living animals in our world. Researchers did carbon dating on a Greenland Shark that was caught in 2014 and found it to be around 392 years old. Further testing revealed that our fishy friends could be up to 500 years old. Yes, that would mean that our geriatric friends would have been alive when Leonardo Da Vinci painted the "Mona Lisa."

Dateline.... SPAINA video of a Spanish man who hid out in a T-Rex costume to avoid the Coronavirus lockdown has gone viral. (https://bit.ly/39ajHgk)

Spanish police have urged citizens to remain indoors during the COVID-19 state of emergency after encountering one citizen on the street dressed as a dinosaur. Video of the incident was posted to Twitter by the Murcia police department. The video shows an unidentified citizen being stopped by a unit of officers who were attempting to enforce the government's plan to limit the spread of the disease—caused by a novel coronavirus that is now spreading globally. On Friday, Spain's Prime Minister Pedro Sánchez imposed a 15-day state of alarm that restricted free movement apart from traveling to work, food, health medication or for caregiving. One small exception was that pets can be taken out on short walks, but police noted on social media that dinosaurs are not considered to be included in this category. (https://bit.ly/392PdfW)

Some spring breakers in Florida didn’t get the social distancing memo. Hundreds of people packed Clearwater Beach as President Trump urged Americans to avoid gatherings of ten people during the ongoing coronavirus pandemic. Local reporter Sarah Hollenbeck, of WFTS-TV, captured the sunny scene with tight clusters of college-age beach-goers scattered across the sand. “BUSY BEACH! This is what @MyClearwater Beach looks like right now as spring break crowds flock to the sand,” Hollenbeck tweeted Monday. Clearwater city leaders are set to vote Thursday on a measure that would restrict or outright ban beach access. Other coastal cities in the Sunshine State have already announced beach closures, including Miami Beach and Fort Lauderdale. (https://bit.ly/3d6WfDL)

A Jacksonville Sheriff who was busted for DUI told the arresting officer he’d let him sleep with his wife if he let him go ….. FAKE NEWS
GOOD NEWS: Brought to you by BetterCreditCards.com

Lowe's Is Donating $10 Million In Protective Products To Hospitals Across The Nation
https://www.sunnyskyz.com/good-news/3709/Lowe-039-s-Is-Donating-10-Million-In-Protective-Products-To-Hospitals-Across-The-Nation