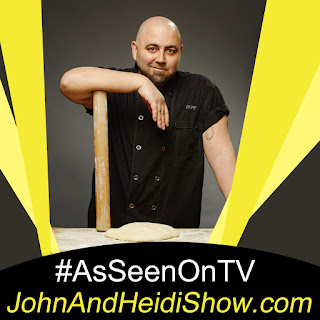 Duff Goldman and his Charm City Cake team of decorators, designers and builders just returned with an all-new array of top-tier cakes that are beyond wild imagination on the new season of Duff Takes The Cake, Monday nights at 10pm ET/PT on Food Network. For years renowned clients have come to the Ace of Cakes star for his artistry and ability to design marvelous edible masterpieces made entirely of cake for noteworthy celebrations and A-list events. https://www.foodnetwork.com/shows/duff-takes-the-cake

A survey by Sleep Standards found that 87% of Americans had strange dreams during the Coronavirus lockdowns. (https://bit.ly/3eFEueA)

THIS IS YOUR BRAIN ON DRUGS: Brought to you by TimeForRehab.com!
Each day we share stories about people doing dumb things under the influence, but ADDICTION IS NO LAUGHING MATTER! If you or someone you know needs help, we're here! Learn more at TimeForRehab.com.
A Jackson County, Michigan Department of Transportation truck was heavily damaged a week ago when a naked woman broke into a Napoleon Township lot, stole the truck, and hit a deer with it, police said. Officers received the strange call about the crash near a home at around 1:00 a.m., Wednesday, May 20th. They arrived to find a heavily damaged JCDOT pickup, a dead deer and a woman wearing only an orange safety vest and hat she had retrieved from the truck. The 31-year-old woman told officers she was with someone earlier that night who had kicked her out of a vehicle and left her on the side of the road. It’s unclear how or why the woman was naked, but Napoleon Township Police Chief Duaine Pittman believes drugs and suspected prostitution were involved. The woman was taken to Henry Ford Allegiance Health to be checked out for injuries and to undergo mental evaluation. A report of the incident has been submitted to the Jackson County Prosecutor’s Office for review and charges related to the vehicle theft. (https://bit.ly/3cgZgj7)

Elmer Fudd has been stripped of his rifle in the newest Looney Toons cartoon.
People are worried that the gun will send the wrong message to kids.
(https://bit.ly/2Ydq8LX)

“Looney Tunes” writers are pushing back against complaints that Elmer Fudd will no longer have a gun in the cartoon. (https://yhoo.it/3dQTxCf)

The Daily Mail has confirmed that James Bond will be the father of a five-year-old girl in the newest film.(https://bit.ly/3h6ARAy)

A video has gone viral of an “Arizona Karen” who was slapped in the face after telling a female shopper to “go back to Mexico.” (https://bit.ly/3f8wzXq)


Author Bill Buford is retracting his claim that celebrity chef Daniel Boulud uses food coloring to enhance the color of his pasta. (https://pge.sx/3hbNuug)

Elton John paid for a knee replacement for his former Fiancee Linda Hannon, who dated him in 1968 when he went by the name “Reg Dwight” and he hadn’t yet come out of the closet. (https://pge.sx/376J96U)

A video of a British “Back To The Future” fan who rode a hoverboard alongside a Delorean to recreate the iconic movie scene has gone viral. (https://bit.ly/2YdnCoO)


Fitness Influencer Tammy Hembrow says her clips are getting deleted from Tik Tok because she’s not wearing enough clothing. (http://dailym.ai/2XIvK1U)


Cardi B surprised her daughter Kulture with a surprise shopping spree at Target. (http://dailym.ai/3dHYrRV)
FUN FACT FOR YOU:Share this with your friends... they'll think you're really smart!
There's a reason there's a hole in your pen caps. And that's because they're a choking hazard without them. "In addition to help prevent the pen from leaking, all of our BIC caps comply with international safety standards that attempt to minimize the risk of children accidentally inhaling pen caps. Some of these vented caps … have a little hole in the top to comply with the existing safety standards," the BIC pen company explained on its website.

Dateline.... RUSSIA
A 266-pound Russian housewife held a robber captive for more than an hour by sitting on him. When her daughter returned home, the woman called police. The man was treated for swollen and bruised limbs.

A woman in England whose sister wants to name her newborn after one of her favorite foods has been slammed by parents online who say the baby will be “bullied.” The woman explained that her sister, who is in her third trimester, is “ready to pop any day now,” and has finally revealed her choice of baby name after keeping it a secret the entire pregnancy. She said that when her sister first shared the name with her, she assumed she was joking, but as the mum-to-be went on to talk about a possible nickname for the baby she found out she wasn't. The aunt-to-be said: "The name is Portabella. Like the mushroom. And yes, she did give me permission to share it here.” “At first, I thought she was joking, but then she started saying how we could just call the kid Bella for short. There's obviously nothing wrong with Bella, but I think naming your kid after a mushroom is weird.” (https://bit.ly/37cfTeR)
MOMENT OF DUH: Brought to you by InsuranceChicken.com

Police reported that a Connecticut woman allegedly spit in the face of a fellow shopper when the victim violated a supermarket’s social distancing guidelines by going the wrong direction in a one-way aisle. According to cops, Martine Shanchuk, a 40-year-old Sandy Hook resident, confronted the male victim inside a Big Y market on May 18th. As part of the store’s Coronavirus safety measures, one-way aisles have been established to allow patrons to more easily maintain a six-foot distance from other individuals. Upon spotting the man going the wrong direction in an aisle, Shanchuk told police she “felt it was necessary to tell him to turn around and enforce Big Y’s aisle rules herself,” according to an arrest summary. During the argument, she allegedly spit in the male customer’s face. She was arrested for breach of peace and is due in court in July. (https://bit.ly/2TSNfKA)
FAKE NEWS.... OR FLORIDA?!
I read a headline, you guess if the story is something that really happened in the great state of FLORIDA or is it #FakeNews made up to trick you and amuse me
A Miami Man with no arms was charged with stabbing a Chicago tourist ….. FLORIDA (https://bzfd.it/2FOTz00)