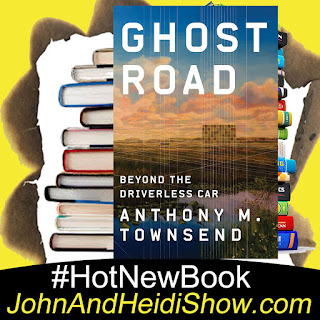 Today we visit with Anthony M. Townsend is the author of GHOST ROAD: Beyond the Driverless Car. Townsend is the president of Asterisk City Group, a forecasting and urban planning collaborative based in New York City, and the author of Smart Cities. For decades we have tried to build a car that will drive itself, but what will happen when self-driving technology infects buses, bikes, delivery vans, and even buildings? https://amzn.to/3fbpZ2t

SURVEYS, STUDIES & SUCH: Brought to you by BetterCreditCards.com
A Swedish study found that antidepressant drugs can lead to violent behavior. (https://bit.ly/2BmDeyD)

THIS IS YOUR BRAIN ON DRUGS: Brought to you by TimeForRehab.com!
Each day we share stories about people doing dumb things under the influence, but ADDICTION IS NO LAUGHING MATTER! If you or someone you know needs help, we're here! Learn more at TimeForRehab.com.
A naked man escaped through a skylight on to the roof of a house in Torquay, England during a drug raid. Police officers said as they executed a drug warrant the man left the building and climbed on to the roof, taking cannabis with him - but cocaine, scales, money, and his clothes were all left in his room. The South Devon Crime and Proactive Policing Team said: “He was quickly persuaded to return inside.” Officers Tweeted a picture of him and said: “This is taking social distancing too far.” It comes during a massively successful period of activity for the drugs teams in South Devon. Another person has been arrested after twelve kilos of cannabis worth around £120,000 was seized last week. (https://bit.ly/2zOFnmg)

BIG SCREEN-LITTLE SCREEN: Brought to you by ChannelSurferTV.com
“Sweet Home Alabama” star Josh Lucas is being accused of cheating during the pandemic by his ex-wife Jessica Henriquez. (https://pge.sx/36Lwp5v)

Kris Jenner is said to be freaking out after Forbes Magazine exposed the fact that Kylie Jenner inflated her wealth and isn’t really a billionaire. According to Forbes, Kylie has said she’s a billionaire but she’s only worth $900 million. (https://pge.sx/3eCQJsw)

A study by Arizona State University found that dogs can actually help owners who are in distress. The survey asked sixty dog owners to go into another room and scream for help WITHOUT calling their dog’s name. Two thirds of the dogs ran in. (https://bit.ly/3gOO012)

A new study by Mount Auburn Hospital found that warm weather will slow down the spread of the Coronavirus. (https://bit.ly/36Wqr1S)

Costco plans to start bringing back its legendary free samples this month with some changes. The retailer suspended its popular samples in its wholesale clubs in early March over safety concerns with the spread of the coronavirus. Now, Costco execs say they are targeting a mid-June return of the freebies. Unlike the old method, samplers won’t be allowed to “just pick up an open sample with your fingers.”

An Idaho man drank a liter of lemon juice through a straw in under 17 seconds for a Guinness World Record. David Rush, who has broken more than 100 Guinness records to promote STEM education, emptied the glass in 16.53 seconds.

The longest book title contains 1,809 words. The title of Srijan Timilsina's 2014 Guinness World Record-setting book is practically a full text in itself. Including 1,809 words (or 11,284 characters) it begins, The historical development of the Brain i.e. from its formation from Annelida: Earthworm, Lugworm, Rag worm, Amphitrite, Freshwater worm, Marine worm, Tubifex, Leech. etc, Arthropoda: Housefly, Butterfly, Honey bee, Fairy shrimp, Horseshoe crab, Tick, Bluebottle, Froghopper, Yellow crazy ant…," and continues to list pretty much every insect, fish, and mammal you can think of, including humans. It then goes on to ask questions like, "What did they find and what did they eat? How did they defend from their enemies and attack them? Which is the oldest stone ever discovered? Which ancestor of human being first started to walk with the help of two limbs?" It finally ends with, "Solutions of above inquisitiveness are included in this book," which you think would go without saying, but perhaps not if you want your title to set a world record.

Dateline.... CHINAChinese archaeologists have unearthed a 2,000-year-old swan-shaped vessel. The bronze pot was found inside the tomb of a warrior, alongside a helmet and an iron and jade sword. In the pot was almost a gallon of mysterious, brownish liquid.

A man was arrested after stealing a Winnipeg ambulance and taking it for a joyride early Friday morning. A paramedic ambulance crew was en route to their station at around 8:30 a.m., when they came across an individual who was clearly in need of assistance. The crew pulled over to the curb and went to lend aid to the person. But within about seventy seconds, they realized the individual was threatening harm to them and the paramedics activated their emergency response button on their radios to summon police. Lane said the individual boarded the ambulance and drove it away. A short time later, the ambulance collided with a building and the individual was apprehended by police. The right front corner and the front axle of the ambulance were damaged but there is no estimate yet on the cost to repair it. (https://bit.ly/3cqLiev)
MOMENT OF DUH: Brought to you by InsuranceChicken.com

A Massachusetts resident is facing an assault charge after allegedly striking a highway worker with a “large pickle” thrown from a moving vehicle. According to police, 34-year-old Christoph Herrmannsdoerfer was a passenger in a vehicle that was traveling on U.S. Route 7 in Vermont. Cops allege that Herrmannsdoerfer threw a pickle that hit Carl Hoffman, a 59-year-old employee of the Vermont Agency of Transportation. The pickle, cops say, “struck the victim and caused him pain.” Herrmannsdoerfer was later located and cited for simple assault, a misdemeanor. He is scheduled for a July 20th appearance in Vermont Superior Court. Herrmannsdoerfer, who lives in Massachusetts, has multiple drunk driving convictions on his rap sheet. (https://bit.ly/2Xsw9Fy)
FAKE NEWS.... OR FLORIDA?!
I read a headline, you guess if the story is something that really happened in the great state of FLORIDA or is it #FakeNews made up to trick you and amuse me

A Broward County Man who was tired of waiting at the hospital stole an ambulance and drove it home ….. FLORIDA (https://bit.ly/2Ix0lGH)GOOD NEWS: Brought to you by #GiftCardChallenge GiftCardChallenge.org