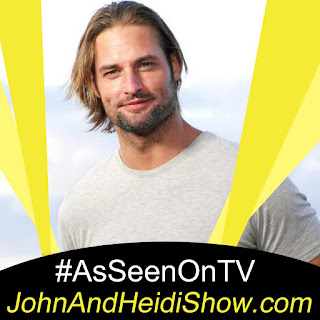 Today we visit with Josh Holloway from LOST and Mission Impossible. He's now teamed up with Kevin Costner for the very popular series Yellowstone, the third season recently started on the Paramount Network!

A survey by Ohio State University found that people who are better at math are more likely to quit smoking. (https://bit.ly/2Z5sLQr)

An Omaha, Nebraska man was arrested Friday night on suspicion of assault after he allegedly deployed pepper spray inside an Old Market bar where he’d been refused entry. The incident occurred at T. Henery’s Pub after 11:00 p.m. Employees told police that the 37-year-old man was denied entry due to Coronavirus restrictions prohibiting bars from operating at more than 50% of capacity. After the man left T. Henery’s, employees reported having burning sensations and labored breathing. The bar was cleared, and employees reviewed surveillance video that allegedly shows the man appearing to walk away before turning and spraying something into the bar. Two employees followed the man to another bar near 11th and Howard Streets where he was found by police. Officers searched the man and found a canister of pepper spray in his pocket. He was arrested on two counts of third-degree assault and disorderly conduct. (https://bit.ly/3ezLbiG)

Apple TV+ is adapting Isaac Asimov’s Foundation series of sci-fi novels in the form of the 10-episode Foundation. Apple says the series “chronicles the epic saga of The Foundation, a band of exiles who discover that the only way to save the Galactic Empire from destruction is to defy it.” It lands n Apple TV+ next year. https://www.youtube.com/watch?v=xgbPSA94Rqg&feature=youtu.be

The new Spongebob movie is going to bypass theaters and head straight to On Demand. (https://bit.ly/2V9KC7N)

Westside Story Actor Ansel Elgort denied a sexual assault allegation on Instagram after a girl accused him of taking her virginity when she was seventeen. (https://pge.sx/3eqZsOy)

Delta is the first airline to resume flights between the U.S. and China. The initial flights will operate twice a week from Seattle and Detroit. (https://bit.ly/3evz1Yb)

A survey reveals that 43 percent of doctors play games on their phones at work.

The new Apple Watch will remind you to wash your hands with a mask-wearing emoji. (https://cnb.cx/2Np1J0V)

Pop quiz: How many coronavirus symptoms are there? The Centers for Disease Control and Prevention recently added three new symptoms to its ongoing list. Congestion or runny nose, nausea, and diarrhea were added, joining fever or chills, cough, shortness of breath or difficulty breathing, fatigue, muscle or body aches, headache, new loss of taste or smell, and sore throat.

The Amazon River Dolphin's brain capacity is 40 percent larger than humans'. It's fairly well known that dolphins are incredibly clever animals—and that's thanks in part to what's inside their noggins. Amazon River dolphins—the wonderfully pink creatures that are also known as Boto or Boutu—have a brain capacity that is 40 percent larger than that of humans. Bottlenose dolphins also have larger brain capacities than humans do—1,600 grams versus 1,300 grams, according to the American Association of Advancement of Science.

An Indian man died of Coronavirus after his family unplugged his ventilator to plug in the air conditioner at the hospital. (https://bit.ly/31pMVYn)

A pizza joint in West Palm Beach, Florida was temporarily shuttered last week after state inspectors found an 80-pound iguana stashed in the freezer. The dead reptile had been gifted to the owner of Pizza Mambo — and was being stored as a future snack in a separate freezer away from the restaurant’s food, according to an employee. The pizza shop immediately trashed the creature when they were notified about the violation. In addition to the iguana problem, the pizza joint was hit with twenty-six other violations, including for rodent droppings and dead roaches. The restaurant, whose license expired December 1st, was also found to have food with “mold-like growth.” (https://bit.ly/31c9cbV)

A Florida man is behind bars after the Flagler County Sheriff’s Office said he stole an ambulance that was idling outside of a hospital and led law enforcement on a multi-county chase. The Daytona Beach Police Department received a call just after 2:30 a.m. Tuesday in reference to a stolen vehicle at Advent-Health. An EMT at the hospital told police she and her other crew members were inside the hospital working on a patient when a man entered the ambulance that was sitting empty outside. She told officers that the front doors of the ambulance were locked, but the back doors were left unlocked as they wheeled a patient into the hospital. Flagler deputies were eventually able to catch up with the ambulance stolen by a man named Keith Peacock. Peacock was eventually secured into handcuffs and taken to Flagler County Jail where he is facing charges of grand theft of a motor vehicle. (https://bit.ly/31c1JJO)

Police arrested a Big Coppit Key Man for DUI after he chugged a can of beer during a police stop ….. FLORIDA (https://on-ajc.com/2KPQejs)