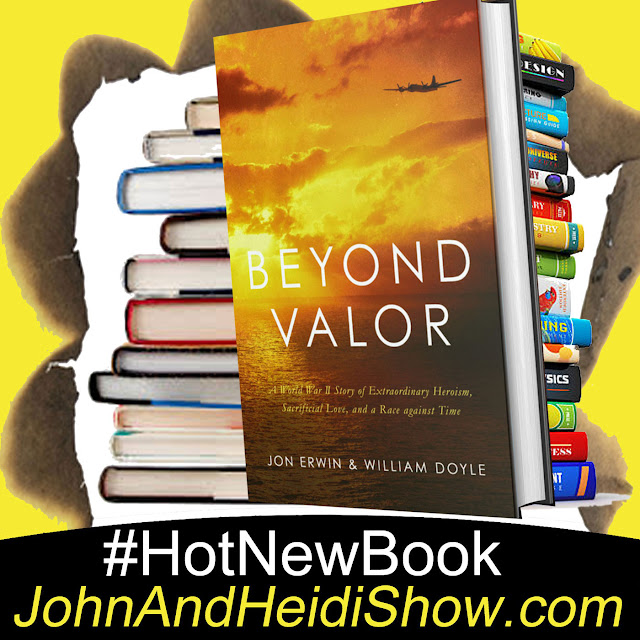 Today we visit with filmmaker Jon Erwin (#1 movie “I Still Believe”, in addition to “I Can Only Imagine”, “Woodlawn”, “Mom's Night Out” and many more) He's now publishing a book about his grandfather, who was awarded the Medal of Honor in World War II. Erwin along with New York Timesbestselling co-writer William Doyle, published the dramatic biography of Red Erwin in BEYOND VALOR: A World War II Story of Extraordinary Heroism, Sacrificial Love, and a Race against Time. https://amzn.to/3hcK1Lu

According to a new survey, it’s not uncommon for Americans to wear underwear for several days without changing.

According to the Marion County Sheriff’s Office, a Florida man who admittedly had “maybe a little too much to drink” was caught on dash camera video riding a lawn mower on a highway. Deputies said they caught Paul Burke, of Fort McCoy, driving the riding lawn mower in the middle of Highway 316. Video provided by the department shows Burke slurring his words and admitting that he had been drinking, although he never quantifies exactly how much he had. At first, Burke said he had “a couple” but when asked again by the deputy again he replies, “I’m not gonna lie to you” and later says, “I have had maybe a little too much to drink tonight.” Burke said he had just left his home and was driving to his home. (https://bit.ly/2PNFqTH)

Comedic Actor and Director Seth Rogen says that he and his directing partner Evan Goldberg were so “traumatized” by the hacking scandal surrounding the release of 2014’s “The Interview” that they moved to directing television instead. (https://yhoo.it/30EnuBp)

Matthew McConaughey has announced the released date of first memoir, Greenlights: October 20. The new book, showcasing McConaughey’s musings on life, is both an advice book and a chronicle of the superstar’s life experiences. The actor shared on social media: “This is my sights and seens, my nices and means, successes and failures, stories, people, places, poems, prayers, prescribes and a whole lot of bumper stickers.”

Does your child need help getting into “a homework state of mind?” Pediatrician Ken Haller said he believes that something as simple as a T-shirt can do the trick. Haller, an assistant professor of pediatrics at Saint Louis University School of Medicine, says parents should invest in what he calls “homework shirts” for their children. Haller says there are a lot of examples in life when you dress a certain way to tackle a given task. You frequently dress formally to go to a wedding. Athletes wear uniforms to play their sport. Curious to see if wearing something special put him in the mood to study, Haller tested out an ordinary gray T-shirt. He says when was he done with homework he took it off and felt a sense of relief that he had accomplished something. Haller suggested having just one “homework shirt” for your child to wear while doing homework during the school year.

Americans are waiting longer than previous generations before purchasing their first home.

There’s a parrot at the Knoxville Zoo that does amazing sound effects and impressions. The parrot’s name is Einstein (female parrot). Check out the video. https://www.reddit.com/r/Knoxville/comments/ib00uv/i_didnt_know_we_had_a_celebrity_birb_at_zoo/

Pepperoni, America’s favorite pizza topping, is getting more expensive to obtain amid production snags at meat plants and high demand for pizza. Small pizza shops across the U.S. are reporting higher prices and tight supply for their usual pepperoni orders.

Lobsters communicate with their bladders. Lobsters have bladders on either side of their heads, so they communicate by urinating at each other. If they want another lobster to know that they're happy or sad or angry or interested in a relationship, they say it with pee!

A man in Germany was arrested after he allegedly punched his older brother for eating three Big Macs and not saving one for him.

A six-year-old girl in England nearly choked on a chicken nugget from McDonald's which contained a blue surgical face mask, her mother has claimed. Maddie was eating a Happy Meal her mother, 32-year-old Laura Arber, bought from the Aldershot, Hampshire branch of the fast food giant on Tuesday. She managed to get the chicken nugget out of her daughter's mouth and said: “It was a mask, it was absolutely baked into it.” McDonald's said it is investigating. Ms. Arber told the BBC: “I had to put my finger in her mouth to make her sick and it came up all speckled with blue.” The mother of four said she went straight back to the restaurant to speak to the manager who told her the nuggets were not cooked on the premises. Ms. Arber said she and her daughter have been put off McDonald's “for life.” (https://bbc.in/2XLD7oR)

Police caught a 40-year-old man accused of robbing patients in a Chinese hospital as he tried to escape while dressed as a doctor. The suspect was stopped by police at the gate of the hospital wearing a white lab coat. He was found in possession of four phones and large sums of cash.

A Miami man was caught sleeping naked on a beach. He passed out sometime late on Saturday night and was found by a church group having an early morning ocean baptism service. - FAKE NEWS

Walking to the fridge every time you want a snack is something most people take for granted. A new community-led program in Nashville is working to make food security a reality for everyone. When Emily Lawlor moved from rural New York to Nashville this year, she couldn’t ignore the economic disparities of those living in the city. The 19-year-old began brainstorming ways to help her new neighbors, and the community fridge program was born about a month ago. It’s simple. The fridges — Lawlor is up to two — are in public spaces, typically outside of businesses, and are open to all. Need food? No problem, help yourself. Want to donate? Great, put it in the fridge. The idea is centered around the community helping its neighbors in their time of need. It take around 50 people to maintain one fridge.