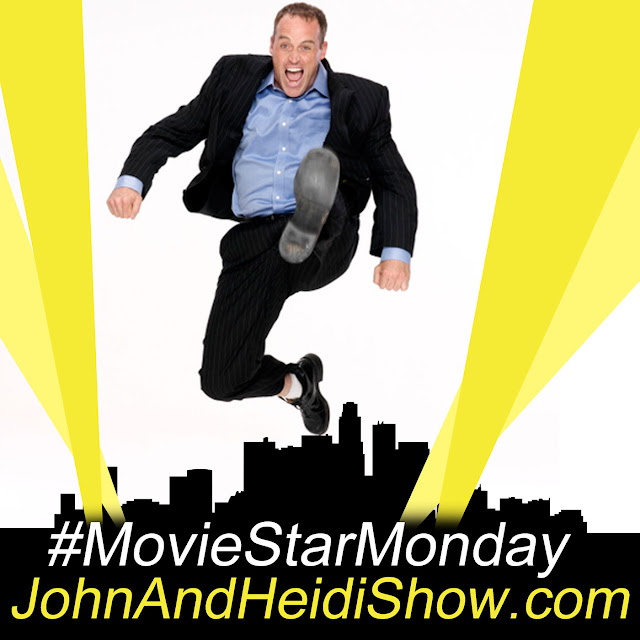 It's another #MovieStarMonday this time we talk with Matt Iseman (Transformers) The Emmy-Winning TV Host is back at the Helm of A&E’s Live Rescue as the Popular Series starts up weekends on A&E! Matt is best known as the host of NBC’s four-time Emmy Award-nominated hit competition series American Ninja Warrior, and its spin-off series American Ninja Warrior Junior. Iseman won season eight of NBC’s The New Celebrity Apprentice, with host Arnold Schwarzenegger, where he raised over one million dollars for the Arthritis Foundation.

A new study conducted by researchers at The University of Toronto found that not eating enough fruits and vegetables could lead to anxiety disorders. (https://bit.ly/30Q1qUz)

A Ford Ka driver pulled over by police in relation to an assault was transporting £60,000 of heroin. John Small was stopped in Hoath Way, Gillingham, on September 5 last year. He was found to have no licence or insurance and the vehicle was seized and transferred to a compound near Rochester. The 57-year-old was taken into custody to be quizzed over the assault. The following day, Small visited the centre and became agitated when staff refused to handover a rucksack which had been in the vehicle. Police were called and discovered two kilograms of heroin in large rectangular blocks. The bag also contained paperwork in Small's name. He was arrested again on September 23 and charged with possessing heroin with intent to supply. Small, of Plurenden Lane, High Halden, Ashford, later pleaded not guilty at Maidstone Crown Court but was convicted by a jury. Last Thursday he was sentenced to six years in prison. Investigating officer DC Steve Brown said: "The quantity of drugs seized had an estimated street value of up to £60,000 and demonstrated clearly that Small played a significant role in the supply of heroin in Medway and beyond. "He made repeated, angry and desperate demands to staff to return the rucksack, providing further evidence he knew of its contents. "The suffering and devastation dealers like Small cause to individuals, their families and to local communities is often far reaching. "Thankfully, the courts have passed a significant sentence, which reflects the seriousness and impact of this crime."  https://www.kentonline.co.uk/medway/news/dealer-pulled-over-with-60k-of-heroin-232271/

“Diana,” a musical based on the life of the Princess of Wales, will premiere on Netflix next year. (https://fxn.ws/2PLKjNh)

Ellen Degeneres has fired her three top producers in an effort to clean up the hostile work environment on the show. (https://bit.ly/2EeRtqK)

Kim Kardashian and Kanye West are said to be working on their marriage at a luxury Colorado resort. (https://pge.sx/3h3Cbnm)

Prince Harry and Meghan Markle have purchased a mansion in Santa Barbara with sixteen bathrooms. (https://bit.ly/2CunNpe)

A Royal Biographer claims that Prince Harry and Prince William rarely speak since the “Megxit” that brought Harry and Meghan to America. (https://pge.sx/3iT83f1)

A new book claims Meghan Markle didn't attend Pippa Middleton's wedding because she was worried it would turn into a competition in the press over who had the best butt. (https://pge.sx/3gSt5d5)

Adele told her Instagram followers that her weight loss is due to a self-help book by Glennon Doyle called “Untamed.” (https://pge.sx/3avjI0z)

A growing number of rich people are leaving Hollywood because of the liberal policies that have turned the city into a cesspool of junkies and violent criminals.(http://dailym.ai/3hfYoyN)

Albion College in Michigan will require students to download an app that tracks their location and private health data at all times in an effort to stop the spread of the Coronavirus. (https://bit.ly/2Ek51Bd)

A man actually changed his name because he lost a bet. After losing a drunken poker bet in 2009, a New Zealand man had his name legally changed to "Full Metal Havok More Sexy N Intelligent Than Spock And All The Superheroes Combined With Frostnova." It took five years, but the name was finally approved by the government. All 99 characters of his new name are on his passport.

North Korea has begun posting videos to YouTube showing off life inside the hermit kingdom. (https://n.pr/2DTEcnw)

Kim Jong-un has ordered the confiscation of all pet dogs because of a meat shortage in the country. (https://bit.ly/2CBRggO)

In a novel bit of nautical nastiness, a Florida Woman opened the port hatch of her boat and proceeded to urinate on her husband who was asleep in the bed below. According to investigators, 48-year-old Heather Smith and her spouse “got into a verbal altercation while on their cabin cruiser at sea.” Around 1:00 am. Sunday, cops say the 47-year-old victim was snoozing when Smith “opened the front port hatch,” which is “located in the roof of the interior cabin bedroom.” Smith then “urinated on the victim” from above. When Smith’s husband subsequently exited the cabin area, she allegedly bit him on the stomach. The victim, cops reported, “had injuries that matched the story.” When questioned by police, Smith reportedly “admitted to biting and urinating on the victim.” She was arrested for domestic battery, a misdemeanor, and booked into the county jail.(https://bit.ly/2Fy1jVj)

Deputies in central Florida are looking for a man who had a temper tantrum at a Wendy's drive-thru window, and it was all caught on camera. According to the Hillsborough County Sheriff's Office, a car full of people became belligerent after they placed their order at a Wendy's in Tampa. One man, identified as 26-year-old Kelvin Barnes, got out of the car and leaned through the drive-thru window. He's seen on camera grabbing things, throwing them to the floor, spilling a beverage, and trying to grab the cash drawer. Employees rush over to shut the window. Barnes gets back into the car with a group of people and drives away. Deputies traced the rental car, a 2020 Nissan Maxima with a Tennessee license plate, to Barnes. He is facing charges of burglary, criminal mischief, and petit theft. (https://bit.ly/3hdKf4Y)

A Miami Woman burnt down the wrong house after she attempted to attack her husband’s mistress... FAKE NEWS