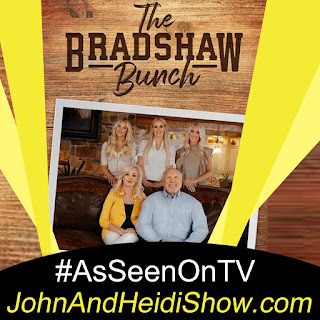 Today we talk with Rachel Bradshaw. She, her sisters and their famous father, NFL Legend turned TV Host, Terry Bradshaw, have a new TV Show. The Bradshaw Bunch on E! Network. Documenting life at The Bradshaw Ranch, the show airs on Thursdays immediately following Keeping Up With The Kardashians. https://en.wikipedia.org/wiki/The_Bradshaw_Bunch

A new study found that the majority of women do NOT lose interest in sex as they age. The study claims that 25% of women rate sex as “very important” even in old age. (https://cnn.it/3kQ7mnE)

A new study found that narcissists are more likely to become politicians. (https://bit.ly/34avdYh)

A Texas man accused of letting his 13-year-old stepdaughter drive them to get ice cream is facing charges. Javier Martinez-Aguilar, 42, of Lubbock, was indicted on a felony charge of endangering a child and criminal negligence Tuesday. On Sept. 9, a police officer pulled over a 13-year-old girl driving an SUV. A police report said Martinez-Aguilar was in the passenger seat. “She was driving her stepfather to get ice cream because he was drunk,” the report said.
https://www.wate.com/news/national-world/texas-father-accused-of-letting-13-year-old-drive-them-to-get-ice-cream-while-he-was-drunk/

Did you know your dog gets jealous when you pet another dog? That’s according to researchers at the University of California, San Diego, who watched 36 dog owners interact with an animated dog. While the owners petted the fake dog, their real dogs started showing signs of jealousy, including pushing at their owner or the rival dog. The dogs were trying to break up the connection between the owners and a rival.

Speaking of dogs: If their ears are standing up, and their tail is wagging, that usually means: “I’m happy” or “come on, let’s play.” If the ears are pitched back, and the tail is down, that’s a sign of anger, fear or stress. Your dog is thinking: “stay back and leave me alone.”

If you drink coffee at work out of a ceramic mug, protect yourself and scrub it often. Canadian researchers ran swabs around the rims and tested for bacteria and found more than 100 bacterial colonies in mugs presumed clean by the people who used them.

After a guy in Italy man swiped a phone from a store’s counter, the victim used another phone to contact him. The thief responded by text and tried to sell the phone back for $150, claiming he bought it from somebody for that price. Cops were able to nail him for the theft.

NASA astronaut Kate Rubins will cast her next vote from space — more than 200 miles above Earth. Rubins is just outside Moscow in Star City, Russia, preparing with two cosmonauts for a mid-October launch and a six-month stay at the International Space Station. Most U.S. astronauts live in Houston. Texas law allows them to vote from space using a secure electronic ballot. Mission Control forwards the ballot to the space station and relays the completed ballot back to the county clerk.

Two armed robbers arrested in South Africa were found to be in possession of 126 boxes of hair pieces. The criminals were apparently unable to give a reasonable explanation as to why they stole the hair pieces, or where they were taking them.

Selfie sticks are still around and still being used, but not like they were a few years ago. In fact, it got so bad that five years ago — in 2015 — all Disney theme parks, Six Flags parks, most U.S. landmarks, many museums, state fairs and most professional and college events said enough was enough and banned them.

In a survey, four percent of adults said they are afraid to ride in an elevator.

A Spanish Zoo keeper was mauled by a gorilla who broke through three different safety doors to attack her in Madrid. The good news is the Zookeeper is expected to make a full recovery. (https://bit.ly/36gt1Bw)

A Utah man allegedly stole a truck he said he needed to rendezvous with aliens, but felt bad for stealing it and returned it to a 7-Eleven store. Bryce Jerald Dixon is accused of theft of a vehicle and three attempts to escape from official custody after he returned a red pickup truck that he later told police he needed so that he could “get to the Colosseum to get on a flight with alien diplomats.” According to court documents, Dixon intended to drive the truck all the way to the Colosseum but felt bad for stealing it so he returned to the 7-Eleven he took it from to give it back. The truck had been reported stolen when the owner — who left his truck unlocked with the keys inside while he stopped into the story — called 9-1-1. The suspect was taken to a hospital for an injury sustained when the truck owner allegedly punched him in the face. Once in hospital care, police said Dixon tried to slip past officers three times. There Dixon allegedly apologized to police and told them aliens needed him to get to the Colosseum.(https://bit.ly/2SbKHWG)

A Texas man was fatally shot when a “heated” game of dominoes got out of hand early Saturday. The shooting occurred at a Humble community center about 2:30 a.m., Houston Police Department spokesperson Lt. R. Willkens told the Houston Chronicle. Officers responding to the scene found the man dead at the scene. According to witnesses, a group of people was playing dominoes and the game “got heated.” One person at the dominoes table then pulled out a gun and fatally shot the man. While the alleged gunman fled the scene, police believe they will be able to find him since the other players knew him. No arrests have been made. “We’re confident we’ll find the guy,” Willkens told reporters. (https://bit.ly/362SMoK)

A Safety Harbor man was arrested for burglary after breaking into a home, cooking breakfast, and telling the homeowner to “go back to sleep” ….. FLORIDA (https://bit.ly/2oVdAuQ)

This Carpenter Is Building Free Virtual Learning Desks For Students In Need
https://www.sunnyskyz.com/good-news/3981/This-Carpenter-Is-Building-Free-Virtual-Learning-Desks-For-Students-In-Need