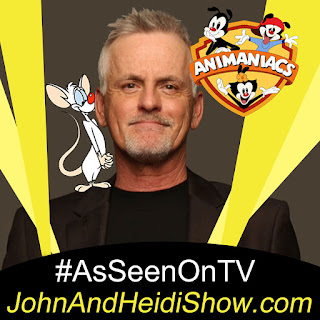 Rob Paulsen, but you know Pinky and the Brain, Animaniacs, Teenage Mutant Ninja Turtles, Jimmy Neutron Boy Genius, and most of the other animated projects that Paulsen has been part of as a voice actor for nearly three decades.

Twenty-two years after its final episode, the long-awaited return of Animaniacs is here! Hulu, Amblin Television and Warner Bros. Animation are proud to unveil a brand-new version of the iconic family friendly cartoon series for the whole family, as the Warner siblings, Yakko and Wakko, and the Warner sister Dot, have a great time wreaking havoc and mayhem in the lives of everyone they meet. https://www.hulu.com/series/animaniacs-b072680d-5485-4adf-87ac-4805c0e96bee

A survey of Dallas Doctors finds that 30% of people are testing positive for Coronavirus in the city. (https://cbsloc.al/3l2lRnV)

A new study found that people over 45 are at a greater risk of catching sexually transmitted infections. (https://cnn.it/3fs4tYI)

A man in the UK was arrested after he threatened his teenage daughter with a kitchen knife after accusing of her of cheating in a game of Battleship. Police suspect he was drinking.

R. Kelly’s ex-wife, Drea Kelly, told the Hollywood Exes Reunion show that she was married but she was never a wife because he was always on the road. (https://pge.sx/3fvpD87)

Iggy Azalea tweeted that she's a fan of “The Crown” on Netflix and she loves how the Queen carries her purse around the house with her. (http://dailym.ai/3fpt5RI)

Britain’s AstraZeneca and Oxford vaccine is said to be up to 90% effective on patients. (https://bit.ly/2KrEvJi)

Over two million Americans ignored the CDC's guidelines and traveled by plane this past weekend. Although, the plane travel is much stricter. (http://dailym.ai/2KAiKqU)

Like most people, you probably deal with a fair share of stress. But how are some people able to stay calm and productive in response to challenges while others are easily rattled? To find answers we can look at a group of individuals who have mastered the art of composure under pressure: The U.S. Navy SEALs. A practice that SEAL teams use in times of trouble is one you can use anywhere. It’s called box breathing or four-square breathing.

The average adult will reach a ‘boiling point’ 156 times a year — and needs 35 minutes to calm down each time. One in four even want to scream and pull their hair out when they ‘see red’. Our jobs and workload are the biggest causes of build-up of pressure, followed by finances and being too self-critical. Our favorite ways to release pressure: go for a walk; laugh; listen to music; enjoy a cup of coffee or tea; take some time alone.

A Brooklyn man became the fifth New Yorker to be shoved onto the subway tracks in the past week, but luckily he survived. (https://bit.ly/2KrFN76)

Colorado Springs is among the finalists to be the location of the Space Command Headquarters when a site is chosen in 2021. (https://fxn.ws/3nR7btO)

An Oregon man is suing a doctor who had an affair with his wife. The court hearing is scheduled for Wednesday. (https://bit.ly/3ftjr0k)

In Norway an unidentified man broke into a pawn shop by smashing a window at the entrance to the store. Unfortunately for him, this triggered an alarm which also sent a rolling iron gate crashing down behind him. He was then trapped like a rat between the gate and the window on the other side, on perfect display for the cops who arrived a short time later.

What’s more appealing: a $110 fine for expired plates or spending $120 per year on renewing your plates when you’ve been getting by just fine without it? One Toronto driver has opted for the former, making it by for thirty years without renewing his plates. According to the TPS Traffic Service, the officer who pulled over the car claimed that he was only eight years old when the plates expired in August of 1989. And that’s not even the record. Another officer in the thread noted that they’d recently come across plates that expired in 1984. Forgetting to renew your plates is one thing, and it’s something that officers in Ontario have been very forgiving about during the COVID-19 pandemic—if you haven’t had the means to renew, they’ll lower the fine and send you on your way. However, that was not the case with this gentleman. (https://bit.ly/39a3YRK)

A 20-year-old Ohio man was arrested at a Perkins Township Walmart on Saturday. According to a police report from Perkins Township, employees at Walmart had asked Colyn Tusing to leave when he refused to wear a mask in the store. According to the report, the officer explained to Tusing that the issue was that he had been asked to leave and was now trespassing because Walmart is private property. According to the officer, he again told Tusing he needed to wear a mask or leave. The officer says Tusing began to walk away and pulled out brass knuckles. According to the report, the officer stopped Tusing at that time and put him in handcuffs, telling him he was under arrest for carrying a concealed weapon. He’s been banned from all Walmarts and Sam’s Clubs. (https://bit.ly/2UUVUMD)

An Orlando window washer was busted for possession of methamphetamines after he was seen on camera leaving them behind in a client’s refrigerator ….. FAKE NEWS

Man Chases Alligator Under Water, Pries Open The Gator's Mouth To Save His Puppy
https://www.sunnyskyz.com/good-news/4045/Man-Chases-Alligator-Under-Water-Pries-Open-The-Gator-039-s-Mouth-To-Save-His-Puppy