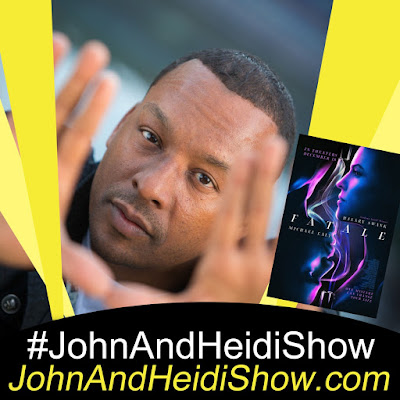 Today we visit Deon Taylor (THE INTRUDER, BLACK AND BLUE, MEET THE BLACKS, TRAFFIK) about his new LIONSGATE film, FATALE, the story of Derrick (Michael Ealy), a successful and married sports agent who after a one night stand with police detective Valerie Quinlan (Hilary Swank), finds his life upended when she entangles him in a murder investigation.

A study by the University of Boulder-Colorado found that bodily emissions released during sweaty workouts create harmful chemicals in the air.(https://bit.ly/393YruE)

A Pennsylvania man said he was “curious and bored” when he set fire to the old Johnsonburg Hotel last week. Johnsonburg police say Andrew Higdon is facing numerous felonies including arson, reckless burning, risking catastrophe, burglary and criminal trespassing. Authorities were called for a working fire at the three-story hotel just before 3:00 p.m. last Wednesday. After arriving on scene, a Johnsonburg police officer says he saw smoke billowing out of the top floor of the building, but none on the lower floors. Crews decided not to enter the hotel because it was abandoned and classified as a “dangerous structure.” The owners of the nearby garage told officers that Higdon had stopped into the garage shortly before the fire and was drinking alcohol. Police say Higdon never left the scene of the fire and appeared nervous the entire time. He eventually admitted to setting the fire, so officers took him into custody and found a lighter on his person. (https://bit.ly/2L9Scxi)

Sources close to Kim Kardashian have confirmed that she’s getting divorced from Kanye West. (https://pge.sx/38llpOB)

Kim Kardashian and Kanye West are struggling to decide how to divide their assets. (https://pge.sx/3scowjP)

Phil Collins’ ex-wife, Oriane Cevey, will be ending their months-long standoff and moving out of their Miami home after snatching up a $5 million dollar mansion with her new husband. (http://dailym.ai/3rRWeep)

Neil Young has sold half the rights to his song catalogue for $150 million dollars. (https://bit.ly/38oRMfg)

A video of a Russian man eating ice cream in a Frozen Lake has gone viral. (https://bit.ly/2LmFQSe)

A flock of angry chickens attacked customers at a McDonalds Drive Thru in New Jersey over the weekend. (https://bit.ly/3qaJDRw)

Las Vegas police say a woman left her three-year-old daughter inside of a casino. (https://bit.ly/3bpRp64)

A growing number of Americans are moving to Mexico City to escape the Coronavirus restrictions at home. (https://bit.ly/353wrG6)

The owner of a gym in Minnesota used a hidden camera to spy on a woman as she disrobed in a tanning booth. The civil suit, filed last week in Wright County District Court, alleges that 45-year-old Snap Fitness franchisee Randall D. Roiger installed a surveillance camera in a tanning booth at the fitness center in Annandale, where he spied on the female customer “repeatedly” without her knowledge. The 42-year-old woman allegedly spotted the secret camera during a visit to the gym in January 2019 and then got in touch with cops. Roiger was later charged with misdemeanor interference with privacy. Roiger has agreed that using the camera was an invasion of privacy, but he has pleaded not guilty ahead of his trial set for March. Attorneys for Roiger, meanwhile, have denied that he watched the woman as she used the tanning booth, insisting he installed the camera in a corner of the booth’s ceiling behind a pinhole to prevent theft and “unauthorized use” of the unit. (https://bit.ly/3otNeK0)

Police in Pakistan have detained a man who was riding through city streets dressed as a werewolf to scare people on New Year's Eve. The man is a resident of Peshawar city’s Moti neighborhood and was detained by Shah Qabool police for allegedly making roaring noises at people while riding his motorcycle. The city police have filed an initial charge sheet against the individual, who has not yet been identified, and say they are investigating his motives for the act. Pictures of the man, posing with the police in one and riding his motorcycle in the other, attracted a mixture of reactions on social media. Journalist Omar R. Quraishi posted one of the pictures on Twitter, where the man can be seen standing with handcuffs next to two police officers, still wearing his full-face werewolf mask. (https://bit.ly/3q7rRir)

A Port St. Lucie man was arrested for trying to trade marijuana for food at a McDonald’s Drive Thru ….. FLORIDA (https://bit.ly/2U3J783)

'You Can't Save Her': Hero Surfer Sprints Into Ocean And Rescues Woman
https://www.sunnyskyz.com/good-news/4102/-039-You-Can-039-t-Save-Her-039-Hero-Surfer-Sprints-Into-Ocean-And-Rescues-Woman