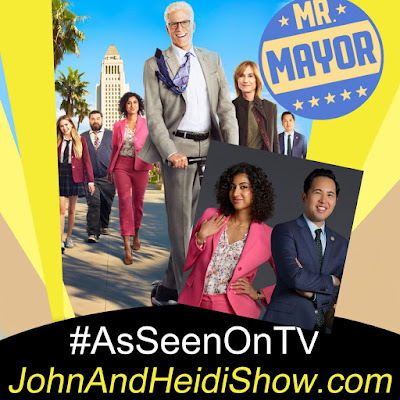 Today we visit with Vella Lovell and Mike Cabellon about their fun TV series with Bobby Moynihan, Holly Hunter and Ted Danson MR. MAYOR is on THURSDAYS 8/7c on NBC - https://www.nbc.com/mr-mayor

A study by Researchers at the University of Cambridge reveals that LSD actively changes the way the brain processes information, freeing it from the boundaries set by nature. The results reveal LSD unties functional brain connectivity from the limits of normal, structural connectivity. This alters the way the brain balances integrating and segregating different pieces of information. (https://bit.ly/2YBFVVp)

Scientists say a 48,000-year-old fossil could be proof of Neanderthals and humans interbreeding. (https://bit.ly/3awARXT)

Federal Prosecutors say that a Kansas drug treatment clinic owner has been hit with drug trafficking charges after he was pulled over in a Maserati while in possession of meth, heroin, and other substances. 44-year-old Trevor J. Robinson was indicted by a grand jury last week for felony possession with intent to distribute methamphetamine, cocaine, heroin, fentanyl and ecstasy. Prosecutors said Robinson was the owner of Nuvista, an opioid addiction clinic that he runs in Olathe, Kansas. He still appeared Monday on the clinic’s site, where he was listed as an office manager. Prosecutors said the investigation into Robinson began when he was stopped by Kansas City police while he was driving a Maserati. During a search, officers found 1.5 kilograms of methamphetamine, pills, plastic bags containing cocaine and heroin, a digital scale, a leather-bound ledger notebook, and more than $12,500 in cash. If convicted of the intent to distribute charge alone, Robinson could face life in prison. (https://bit.ly/2Lg7dOe)

Sarah Jessica Parker has announced that a revival of “Sex and the City” will take on the subject of coronavirus. (https://nwsdy.li/2L7KgfY)

Shortly after becoming a mother a few years ago, actress Keira Knightley started using a body double to take her place in nude scenes. She’s through with them, she says. But she’s willing to make an exception for another Hollywood rarity: films directed by women. Knightley, who has a no-nudity clause in her contracts, said she’d bend her own rule for the sake of representation — and the subject matter. “If I was making a story that … was about the journey of motherhood and that journey of body accept[ance], I’m sorry, but it would have to be with a female filmmaker. I don’t have an absolute ban. But I kind of do with men. It’s partly vanity,” she added, noting that the birth of her two daughters transformed her body in ways she never imagined.”

Phil Collins has unloaded his Miami Beach mansion — and closed a chapter in his messy divorce from wife Orianne Cevey. According to a listing for the house, a sale is pending, though the buyer and selling price is not yet known. Phil originally put the $40 million home up for sale in December, while Orianne and her new husband, Thomas Bates, were still living there. Orianne and Bates had agreed back in October that they would move out by January 21, after initially refusing to vacate the property. Phil and Orianne split for the second time last year after it was revealed Orianne married another man — Bates — in Las Vegas. As for the mansion, the 10,769-square-foot estate boasts six bedrooms, eight and a half bathrooms, a 6,000-gallon koi pond, a customized chef’s kitchen, a wine cellar, an elevator and more.

The Miami Heat are turning to COVID-sniffing dogs to screen fans at the gates. The Heat been working on the plan for months, and the highly trained dogs have been in place for some games this season where the team has allowed a handful of guests — mostly friends and family of players and staff. Starting this week, a limited number of ticket holders will be in the seats as well, provided they get past the dogs first. The first Heat game with ticket holders is set for Thursday against the Los Angeles Clippers.

The Blue Man Group is ending it's fourteen-year run at Universal Studios Orlando after being closed since the start of the pandemic. (https://bit.ly/3rjs0Qh)

Adele suffered a “music leak” after a snippet of her new song leaked out online. (http://dailym.ai/36EeVck)

A toddler, who was recorded by her parents making sounds in the womb is now releasing an album of the music called “Sounds of the unborn.” (https://bit.ly/3jjttTU)

Kraft is releasing a new pink macaroni and cheese for Valentine's day. https://cnn.it/3cHcPMu

The flea can jump 350 times its body length. It's like a human jumping the length of a football field.

The Mayor of Amsterdam is threatening to ban foreign tourists from visiting the city’s cannabis cafes. (https://bbc.in/3arACgT)

Several people were arrested for changing the Hollywood sign to “Hollyboob.” According to photos and videos on social media, the “W” and “D” of the Los Angeles landmark appeared to have been covered with “Bs” earlier in the day. Park rangers quickly restored the sign and at least six people were detained and facing trespassing charges. The prank appeared to have been part of an effort to raise awareness for breast cancer. The 98-year-old sign has gotten facelifts in the past. In 2017, pranksters also managed to get past the landmark’s gates and sensors to alter it to read “Hollyweed.” (https://bit.ly/3at2QIc)

K-pop star Sowon, a member of the popular all-girl group GFriend, is under fire for posing with a mannequin decked out in a Nazi uniform. The 25-year-old performer, whose real name is Kim So-Jung, posted since-deleted photos on Instagram showing her affectionately standing next to the mannequin — forcing the group’s record label to issue an apology, according to a report in the Independent on Monday. “We would like to offer a sincere apology for the issues caused by video clips from the behind-the-scenes footage of GFriend’s comeback show as well as photographs uploaded by GFriend member Sowon,” Source Music said in a statement. The company went on to say that Sowon felt “a profound sense of responsibility and deep regret” for posting the pics — which she “immediately deleted.” The images were from a video shoot and were posted with behind-the-scenes clips in December and on Instagram on Sunday. GFriend, a six-member group formed in 2015, has released four studio albums and completed two tours of Asia amid wide acclaim. Sowon has 817,000 Instagram followers. (https://bit.ly/3tntHOC)