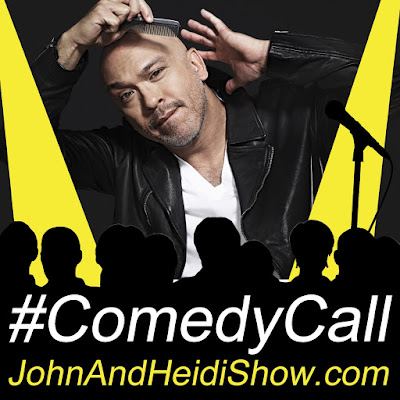 Today we have a #ComedyCall with very funny comedian Jo Koy. We will talk about his new BOOK... his new COMEDY SPECIAL... and his new MOVIE “Easter Sunday” which is in the works NOW with Steven Spielberg.

National Clams on the Half Shell Day

A survey of 2,000 Americans currently working remotely reveals 50 percent have stopped sending as many emails since the start of the COVID-19 pandemic. Fifty-one percent claim it “crushes their soul” every time they get another email, with 43 percent saying their biggest complaint is that emails are a very formal and constraining way to communicate. (https://bit.ly/2PsU3ze)

A new study finds that adding seaweed to cattle feed can reduce their methane emissions. (https://bit.ly/3lLurcN)

More than half a ton of marijuana with a street value upwards of $8 million was discovered by a sharp-nosed police dog during a routine traffic stop in northwest Indiana. Authorities said that a “conservative” estimated street value of their discovery is approximately $5.7 to 8.5 million. (https://abcn.ws/3vCBXuX)

Prince Harry has started a new job as a tech executive. (https://cnn.it/3cejEoh)

Prince Harry has reportedly taken on a new job as an executive of a Silicon Valley startup. The recently outspoken royal confirmed to the Wall Street Journal that he will become “chief impact officer” of BetterUp Inc., an online coaching and mental health firm. (https://pge.sx/3lHAYoQ)

A 25-Year-old father was caught on cell phone video taking his 2-year-old daughter into an elephant enclosure at the San Diego Zoo, dropping her, and running as the elephant charged. (https://cbsloc.al/3vYToWL)

A generous woman who ate breakfast at a Florida Keys restaurant left a $10,000 tip on top of her $193 bill. Castaway Waterfront Restaurant & Sushi Bar in Marathon, Florida, shared a photo of the receipt with the eye-popping tip on its Facebook page, congratulating the staffers who are splitting the windfall. (https://fxn.ws/3r0otWz)

A man in Bakersfield, California was seen hitching a ride by hanging on to the back of a semi-truck on a highway. (https://bit.ly/3qTfOFi)

A very small percentage of the population can safely drive while talking on their phones, but chances are high that you are not one of them. In a study, psychologists identified a group of people who can successfully do two things at once. These people are called “super-taskers” — and you’re probably not one of them. The researchers (from the University of Utah) said super-taskers make up about 2.5 percent of the general population.

Marie Curie is the only person to earn a Nobel prize in two different sciences. The pioneering researcher won the Nobel Prize in Physics in 1903 (shared with her husband) for her study of spontaneous radiation, and then won the Nobel Prize in Chemistry in 1911 for her work in radioactivity. That makes her one of just six recipients to receive multiple Nobel prizes, and the only person to receive it in two different sciences. (Chemical engineer Linus Paulding earned a Nobel Chemistry Prize and Nobel Peace Prize, but all other multiple winners received theirs in the same category).

A couple was caught allegedly stealing lamb and a variety of seafood from a Naples Costco by shoving it in their pants and purse. 71-year-old Lucrezia Gentile and 76-year-old Vito Gentile, part-time Florida residents from Brooklyn, New York, were arrested. A witness told Collier County deputies she saw the couple conceal multiple items and leave the store without paying for them. She said she saw Vito fold a halibut package in half it place it in Lucrezia’s purse. Crab legs and clams also were allegedly placed into Lucrezia’s purse. Vito was reportedly seen placing lamb down his pants. The couple walked through the Costco, paid for several items, and left. Deputies reported finding the seafood and lamb in Vito’s pants and Lucrezia’s purse. The total amount of the items that were stolen was $146.97. Costco wishes to press charges. The couple is facing charges of retail petit theft. (https://bit.ly/3tQDUlI)

A 23-year-old woman accused of assaulting her girlfriend after an argument over chicken nuggets bit the Bedford County deputy who took her to jail. Lillian Barnett was booked into the Bedford County jail on multiple charges, including aggravated assault on an officer, domestic assault, and disorderly conduct. A warrant alleges she assaulted her girlfriend on March 18th during an argument, which she told detectives “started over chicken nuggets.” When Barnett was placed in the back of a deputy’s patrol car, the deputy said she screamed and attempted to kick out the window of the patrol car, while continuously hitting the window with her head. The warrant states Barnett bit a deputy on the right arm, as he walked her to a cell at the Bedford County jail. In the past, Barnett had previously said she was positive for Hepatitis C. Barnett is scheduled for an initial court appearance on the morning of March 31st. (https://bit.ly/3f8Y7PM)