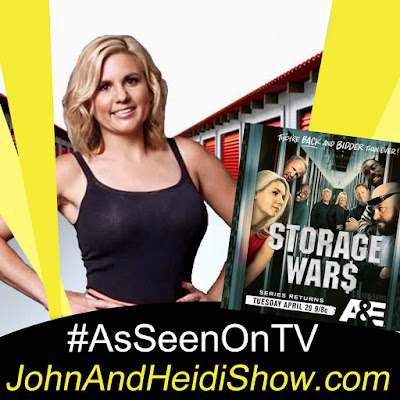 “Storage Wars” returns to bidding, buying and selling for an all new season of wild auction battles in California. Fan-favorite auctioneers and buyers including Dan and Laura Dotson, Brandi Passante, Jarrod Schultz, Darrell Sheets, Kenny Crossley, Rene and Casey Nezhoda, as well as Ivy Calvin and his sons return to the lockers in search of the next big find. This season, viewers will join the thrill of the hunt at the fast-paced auctions for a look into the exhilarating, high-stakes world of storage auctions. Buyers go to the storage facilities, willing to risk it all, to bid on the contents of lockers and if they’re lucky, find treasure not just trash! “Storage Wars” returns for some of the best (and worst) storage unit finds.

Join the conversation on social media with @aetv by using #StorageWars.

If your 20s and 30s are way behind you, what’s a pieces of advice you think every young person needs to hear?

• Get fit and stay fit because your unfit body will eventually mess up your life and very likely your bank account.

• With every thing you bring into your apartment or home, take something out — sell it, donated it, or trash it.

• When deciding between going to bed or watching one more episode or playing one more game level, always choose bed.

A North Carolina woman was busted on drug trafficking charges after a child showed up to school with a large quantity of cocaine last week. Over 260 grams of the drug were found inside the child’s book bag last Tuesday by a school resource officer at Trent Park Elementary School. The discovery led the arrest of 27-year-old Sharae Becton. She is charged with trafficking cocaine, possession with intent sell/deliver cocaine, and child abuse. Police did not reveal Becton’s relationship to the child. A photo posted to the Craven County Sheriff’s Office’s Facebook page shows cocaine wrapped inside a vacuum sealed plastic bag, along with a baby blue Jansport backpack. (https://bit.ly/2Q1oInc)

TMZ is reporting that “Real Housewives of Orange County” star Braunwyn Windham Burke has broken up with her girlfriend Kris and is now dating other women. (https://pge.sx/2QcxiQg)

The Kardashian legal team is working hard to remove an unwanted photo of Khloe Kardashian from the internet that shows her in a swimsuit without any air brushing. (https://pge.sx/39Yv7qw)

Usher is accused of giving out fake money at a strip club. (https://bit.ly/3uK8gqI)

The Los Angeles County Sheriff’s Office announced that Tiger Woods’ horrific accident was caused by excessive speed. Sources with direct knowledge told TMZ that Woods was speeding when he lost control of his loaned 2021 Genesis GV80 in Southern California. It was by a stroke of luck that Tiger made it out alive. (https://bit.ly/2Q7vtE0)

The lovesick British Romeo who rode a jet ski across the Irish Sea to be with a new gal pal has reportedly broken up with the woman. (https://bit.ly/3ambPMb)

An unusually late winter frost is forcing wine grape fields across Europe to use torches to warm their crops. (https://bbc.in/2PZul5V)

Every second Americans collectively eat one hundred pounds of chocolate.

Chinese officials have launched what they say is the world’s first traffic light for camels. The new traffic lights were installed to help tourists. Camel-riding tours are a big attraction for visitors at the Mingsha Mountain and Crescent Spring in Dunhuang City. (https://bit.ly/329WWrx)

A Sri Lankan beauty queen who caused a pageant brawl over the crown has been arrested over the on-stage altercation. Reigning “Mrs. World” Caroline Jurie was arrested on charges of “simple hurt and criminal cause” in connection to the chaos Sunday night at a pageant in Colombo. Jurie, who is from Sri Lanka, started the ruckus when she jumped on stage as they crowned the new “Mrs. Sri Lanka” winner Pushpika De Silva. She snatched the crown off De Silva’s head, claiming she was actually divorced and thus disqualified from holding the title. “There is a rule that prevents women who have already been married and are divorced, so I am taking steps to make the crown go to second place,” Jurie told the crowd. Jurie put the crown instead on the runner-up, prompting tears and fracas on stage. De Silva had to be hospitalized to be treated for head injuries after the debacle. Police confirmed Thursday that they arrested Jurie and another competitor in connection to the brawl.(https://bit.ly/3fTMnkz)

A man suspected of stealing seafood from several towns around the state was taken into custody in Windsor. Windsor police said 30-year-old Nicholas Latina of New London had entered Geissler’s Supermarket about 5:15 p.m. They said he attempted to take some items but replaced them. According to police, Latina was known to store personnel. He was detained and, although they did not have a violation to charge him for, officers learned that he had outstanding warrants in several other towns, including Bristol, Cheshire, Plymouth and Vernon. At least three times since late February police have investigated the theft of groceries including shrimp from local grocery stores. In Plymouth, police are still investigating the theft of more than $1,000 in shrimp from a local supermarket on February 21st. Police said 30 to 35 bags of shrimp were taken from Adam's IGA, located at 311 Main Street, around 3:45 p.m. Police estimated the shrimp is valued at $1,100. (https://bit.ly/3rVtmAI)

'It's A Miracle': Massachusetts Woman Reunites With Missing Dog After 5 Years
https://www.sunnyskyz.com/good-news